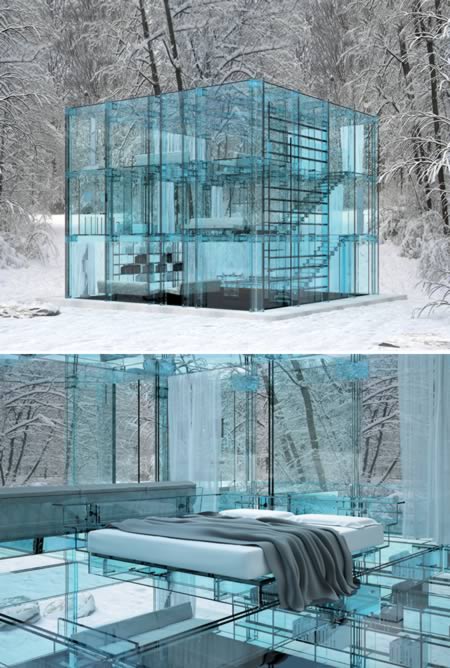 This house is a conceptual design by Milano-based designer and architect Carlo Santambrogio. These are actually pictures of a very well done artist's rendering and not a real house. Not yet anyway. The house above is part of his glass house series, and this one in particular is designed to be a "snow house." The grid structure of the house is made to be modular and can be designed into almost any configuration. In his "cliff house" design, the house is elevated over a thin sheet of water, making its occupants feel like they are floating above the cliff. 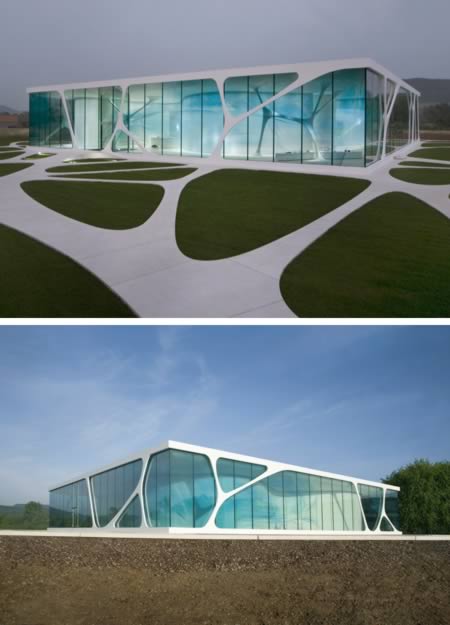 Leonardo Glass Cube is a glass-fronted brand pavilion in Bad Driburg, Germany designed by 3Deluxe . Designed for the Glaskoch Corporation and completed in May 2007, the pavilion is used for informal meetings and corporate hospitality. 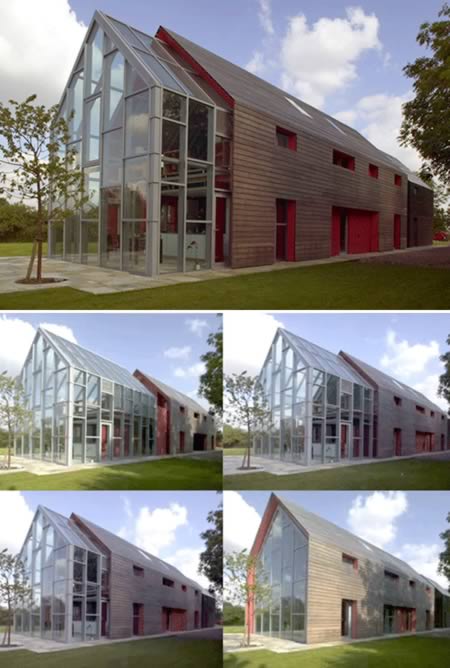 dRMM Architecture did something we've never seen before in another house by creating a very amazing and unique sliding house design. At first sight, you may think it's an ordinary wooden barn. The form doesn't look like anything special. It's only later when you realize that the entire outer skin (the wooden part) is capable of sliding back and forth. 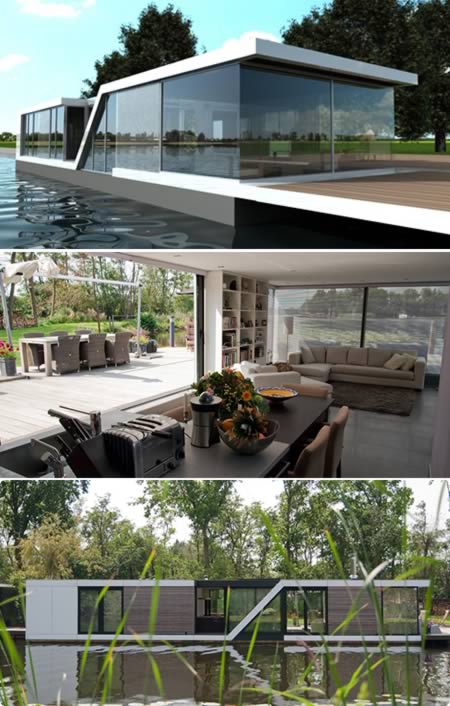 Lakeside real estate tends to come at a premium largely due to the impressive view. The Watervilla Kortenhoef, located in the Netherlands, offers residents a panoramic view of the lakefront, as nearly every square foot of the exterior walls are glass. This ceiling-to-floor glass wall design, paired with the fact that the floor is mere inches from the surface of the water, gives inhabitants an impressive view of the water from anywhere in the house. The modern design features stairs to a rooftop terrace where the view is undoubtedly even more impressive.

Perhaps the best feature of the structure is that the basement level rests beneath the surface of the water. This submarine level holds the bathrooms and bedrooms. After all, in a house made of glass, hiding the bedrooms underwater is the only sure way to get any privacy. The submarine rooms have glass panels on the floors to offer more up-close-and-personal view of the water. 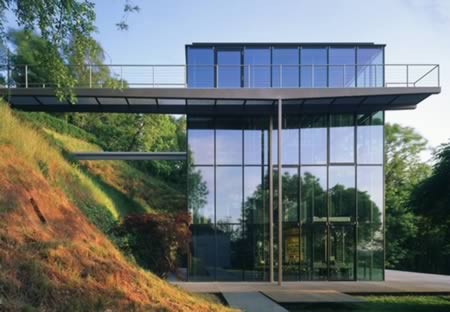 A glass house with sustainable features? The architecture of this amazing glass house is the answer. “House R 128” by Werner Sobek Architects brings the best of both worlds to the table. The structure of 4 apartments in Stuttgart, Germany is a modern building of glass that has nothing to hide. The front windows of the house have triple-glazed windows through which natural light floods through a filter into all the rooms. The house has solar panels that power the house when the sun goes down. The house is also incredible for its sustainable properties, featuring geothermal energy and cooling. Modern modular construction – including its wooden floor and facade – allows for easy assembly and deconstruction. This is not only intended for the house innovators outside the network, but also to make it completely reusable and recyclable! A bridge over the kitchen and dining room is available, offering the 2706 sq. foot home a warm welcome with a modern twist. Minimalist styling in the "House of R 128," including no interior walls and some modern works, create open areas for the characterization of the concept of life. 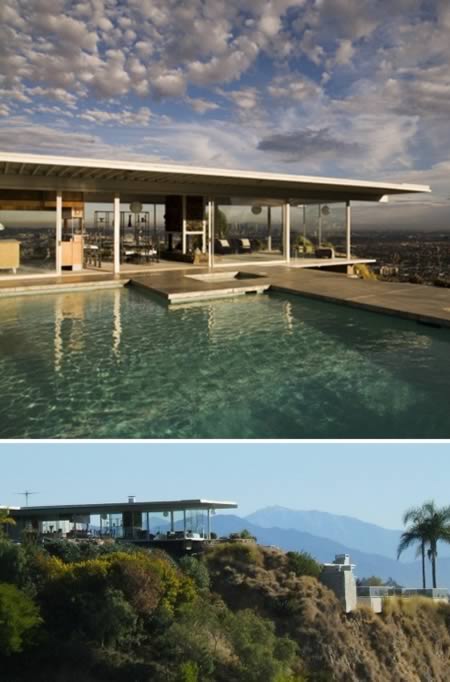 The Case Study House Program, a landmark American architectural experiment, was announced in 1945 by publisher John Entenza in his magazine Arts and Architecture. The impetus of the program was to build homes which would serve as model environments for post-war living using pre-fabricated and industrial materials developed during World War II. The Case Study Homes were mostly built in Southern California during an optimistic, challenging and creative era in American architecture.

A unique house with two balconies designed by Bassam El-Okeily from Egypt. In addition to looking cool during the day, every night soft lights transform the townhouse into a beautiful art installation. 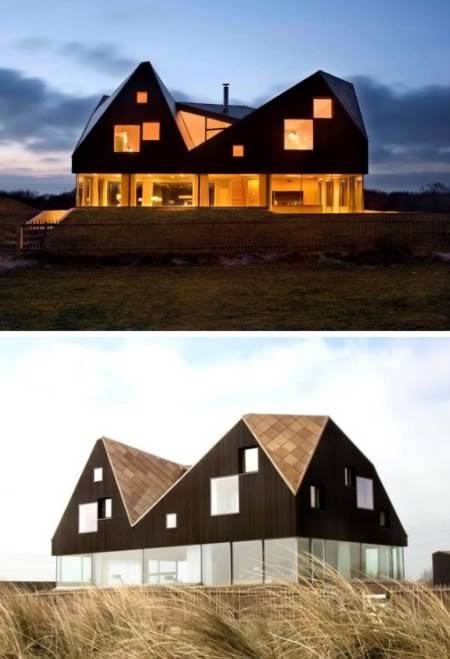 The Dune House lies just south of the picturesque village of Thorpeness, in Suffolk, on an idyllic spot at the very edge of the sea, nestled among rolling dunes. You can walk out from the living room directly onto the beach and enjoy extraordinary panoramic views over the sea from the terraces, bedrooms and bathrooms on the upper floor.

Living Architecture invited one of Norway's most renowned practitioners, Jarmund/Vigsnæs Architects, to create a house on this archetypal English seaside site. JVA, as they are known, made their name building a series of accomplished houses in Oslo and its outskirts and intimately understood the need to balance the advantages of modernity with the traditional virtues of warmth and comfort. 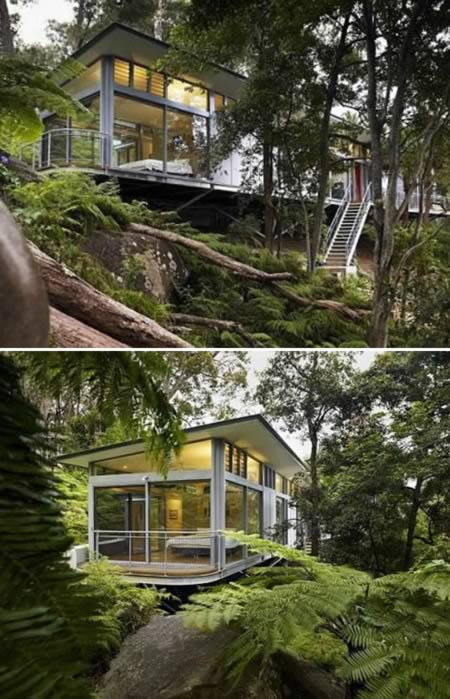 This hill-perched transparent home plays peek-a-boo through the trees, but, for the most part, rocks and foliage nestle it in complete privacy. Located near the ocean in Pittwater, about 30 miles north of Sydney, the Church Point Home was designed by Sydney architectural firm Utz Sanby. The firm describes the home as a tree house that offers “seclusion and sanctuary” to its residents. Concrete pillars made to look like trees support the house on its hillside seat, much like limbs act as a tree house's supports, and though the home can seem muted with a majority of grey and white color schemes, small bursts of red strategically assert themselves inside and out. Hardwood floors and a wooden kitchen table set help harmonize the home with its forest location. 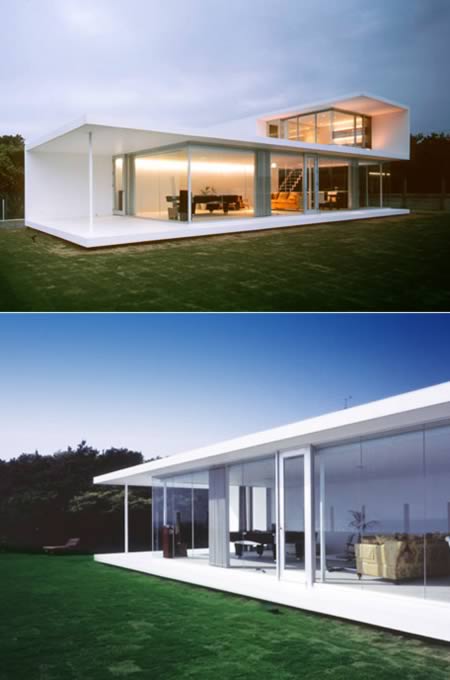 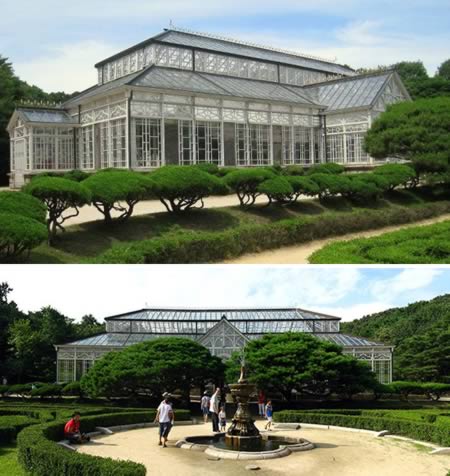 One of the nicest places to stroll around in Seoul is the Changgyeonggung Palace, one of Korea's five major palaces. The glasshouse of the Changgyeonggung Botanical Garden was built in 1907 as Korea's first wood, iron and glass glasshouse. The building was designed by Hayato Fukuba, who was in charge of the Shinjuku Imperial Garden in Tokyo, and constructed by a French company. The glasshouse still contains rare flora, including tropical plants.

The glasshouse was a symbol of the Victorian Age, the Industrial Revolution and the technological, economic and cultural might of the British Empire. The father of the glasshouse was Joseph Paxton, the 19th century gardener and architect whose masterpiece was the Crystal Palace of the Great Exhibition of 1851.