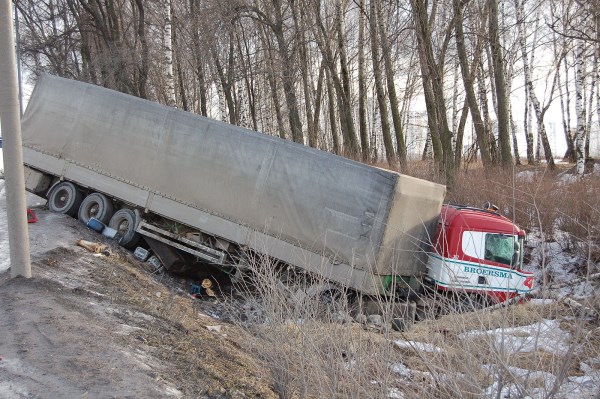 A Chinese motorist had a lucky escape when his mini bus plunged down a sheer drop off a mountainside road – and was ‘caught' by a passing lorry. Yu Lin, from Nanyang, Henan Province, was on his way to collect his five-year-old daughter from a friend's house when his bus skidded on a mud patch and careered over the drop. “I could feel myself falling and it all seemed to be happening in slow motion like a movie. I thought to myself 'That's it, you're going to die'" explained Wu. 32. "Then all of a sudden there was a bump and I stopped in midair as if I'd been caught by a giant hand."

Astonished witnesses told police that Wu's bus had become wedged in the gap between the truck and the sheer bank in a million-to-one freak chance. 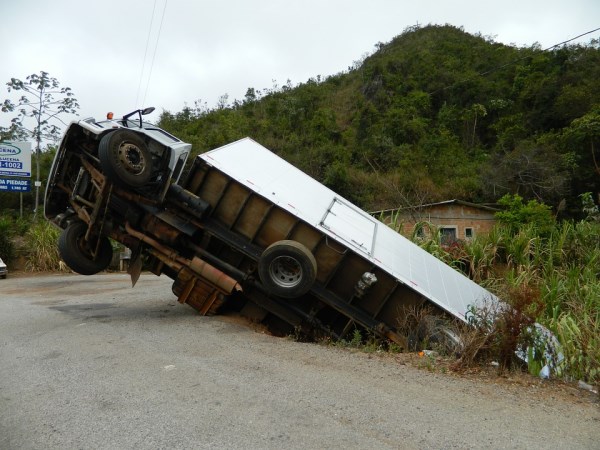 A bizarre accident occurred in New York City in August 2011 when a sanitation worker lost control of a garbage truck and crashed through the third floor of a maintenance facility. The incident remains under investigation, but the driver was eventually freed and taken to the hospital with minor injuries. To get the truck out of the perilous position, workers used a crane to hoist the front end while the rear was pulled, inch by inch, back into the building. 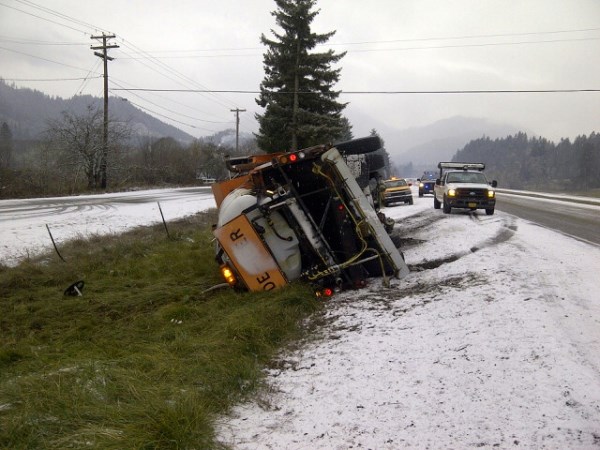 A stretch of Interstate 45 in Houston has reopened after being closed for hours following a wreck that left one end of a truck bed leaning precariously against an overhead sign. The driver wasn't harmed in the accident when the truck's empty bed lifted while traveling and smashed into the overhead structure.

Somehow, the operator kept going, unaware that the hydraulic unit was activated, raising the trailer while he kept driving along. The hydraulic arm can be seen hanging from the front of the trailer. 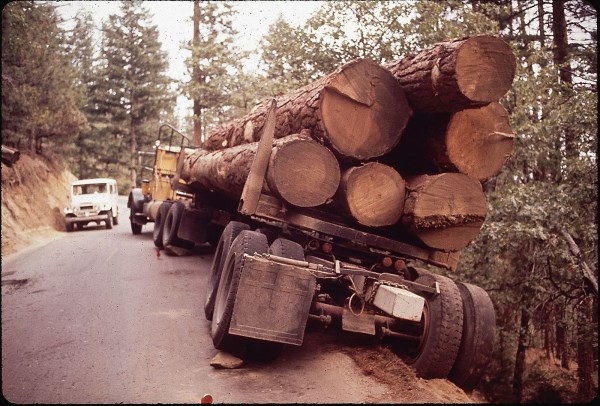 Can we fit under there? Apparently between their slogan and reality there is a tiny difference. 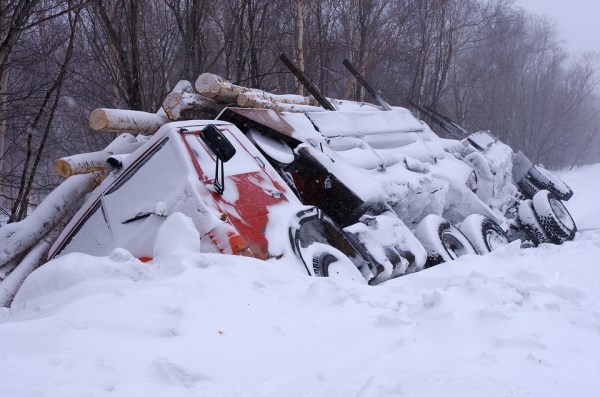 On the other hand THIS slogan is as literal as can be. 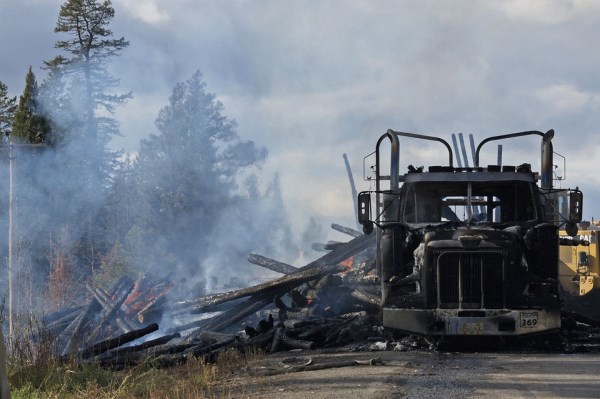 A lorry driver ended up with a face as red as the cab of his truck after a satnav blunder left him stuck in a narrow alley in the village of Bruton, Somerset. The driver, who remains anonymous, was delivering soft drinks in the sleepy village and was searching for a parking space when his lorry became stuck between a house and an estate agent's office. Thanks to the alley's steep incline, he was unable to reverse back up the street and had no choice but to stay put and endure the taunts of the locals, who found the whole incident much more amusing than his boss. 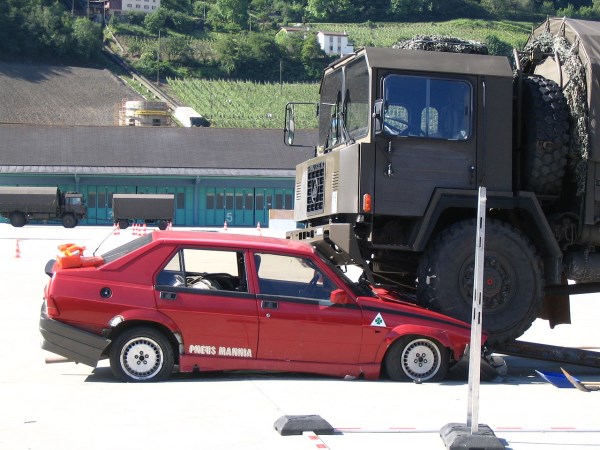 A lucky trucker survived a real-life cliffhanger when his overloaded lorry balanced above a 400-ft drop after its brakes failed. The lorry – loaded with 40 tonnes of coal – was going too fast to make a turn in Qingzhen, south-west China. ‘The driver had been convinced he was going to die and took a lot of persuading to climb out of his cab and back up the truck,' said a police spokesman. 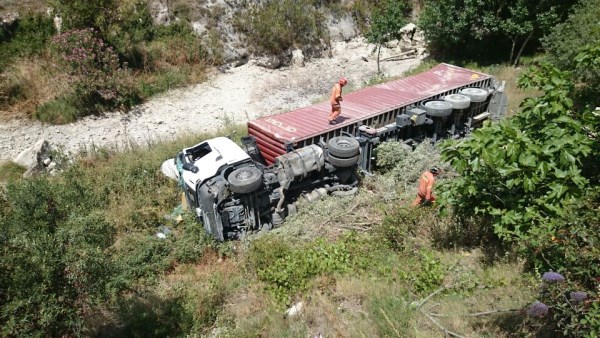 A lorry driver had a miraculous escape in China after an accident left his cab hanging precariously over the edge of a flyover. The truck appeared to be defying gravity as it dangled 100ft above the ground in Chengdu. The lorry, which was carrying a container, lost control on a tight bend and crashed into the side of the flyover, breaking through metal crash barriers. The container crashed to the street below but the driver's cab somehow managed to avoid having the same fate. 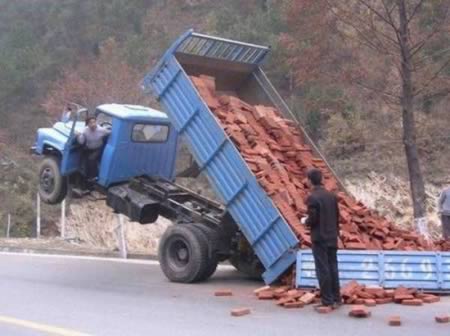 A truck full of bricks tips over from the sheer weight of the load. 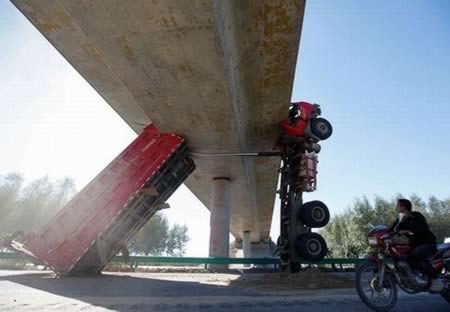 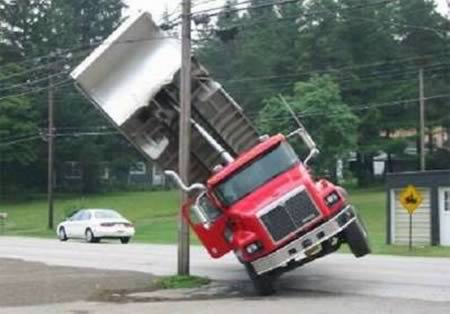 That's what I call a bad turn. 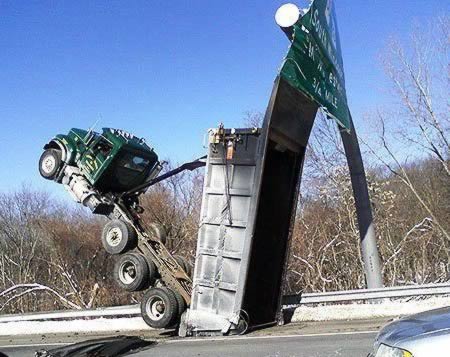