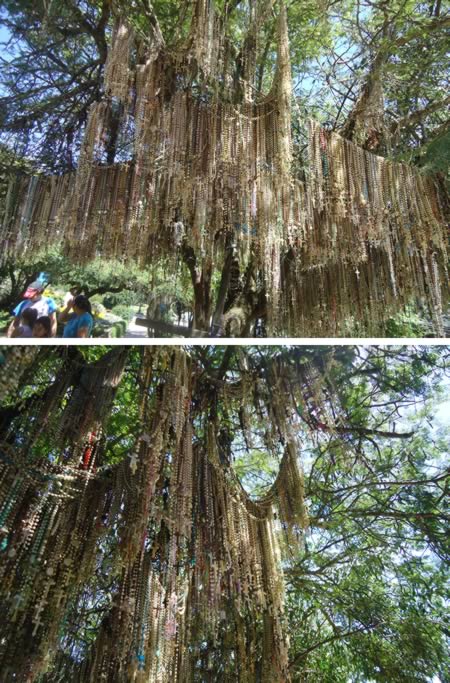 Hundreds, perhaps thousands of rosary beads are hanging from the branches of trees around a hilltop shrine outside the city of Salta, in northern Argentina. They are the visible signs that something extraordinary is happening at this place where, it is claimed, Our Lady appears and communicates with a local housewife, Maria Livia de Obeid.

2Shoe Tree in Nevada (US) 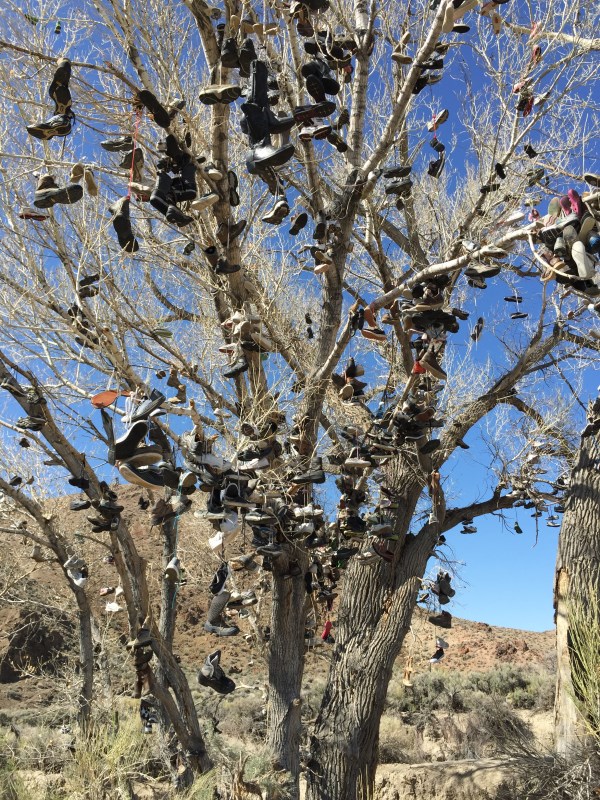 Unlike most roadside attractions, the Shoe Tree isn't some sort of gimmick or money-making scheme. Instead of flashy signs and entrance fees, this is simply a lonesome and mysterious tree laden with hundreds, if not thousands, of shoes located on a deserted stretch of highway between the cities of Ely and Reno. Although no one makes a profit off the bizarre beauty of this tree, many people have contributed their shoes to the tree over the years and it has amassed a kind of cult following.

NOTE: Sadly, the Shoe Tree in Nevada was cut down by vandals. (Thanks, Kile P.) 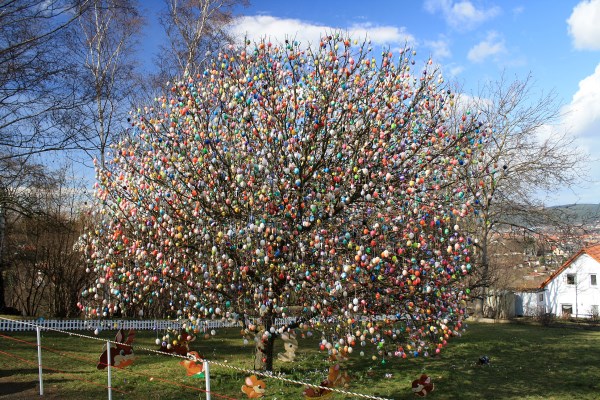 Volker Kraft's apple sapling sported just 18 eggs when he first decorated it for Easter in 1965. Decades later, the sturdy tree is festooned with 9,800 eggs, artfully decorated with everything from sequins to sea shells. Decking trees with hollowed-out, painted eggs for Easter is popular in Germany, but the 75-year-old retiree's annual creation has become something special. In 2010, it drew more than 13,000 visitors. Kraft needs two weeks and countless trips up and down his ladder to hang the eggs and the task has become a little heavier each year since he began the decorations in 1965. Kraft started with plastic eggs. Each year, the project grew; he switched to real eggs and enlisted his three children's help in blowing out and painting them. 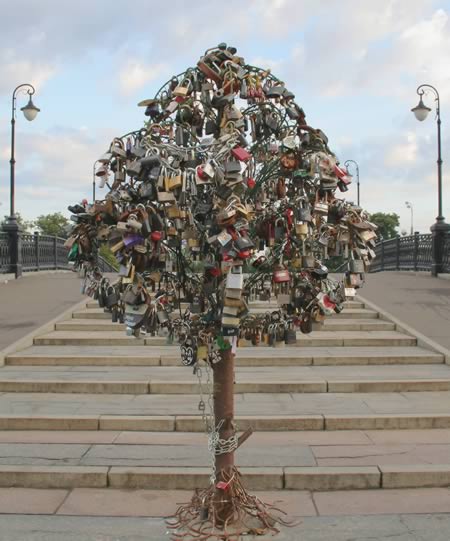 An iron tree for "marriage locks" on a bridge over a Moscow river.

5Island of The Dolls (Mexico) 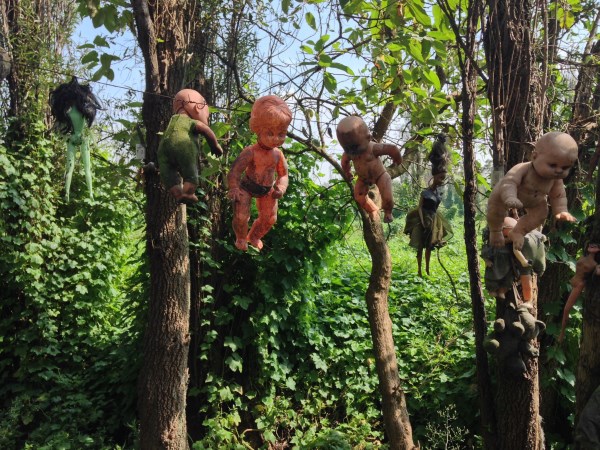 The Valley of the Dolls was one place, located in the mind of author, Jacqueline Susann. Mexico's Island of The Dolls, however, situated south of Mexico City deep within an extensive network of canals, is not only weird, it is also real.

La Isla de las Muñecas is a bizarre tourist attraction by anyone's standards. Old mutilated dolls adorn almost every tree growing on the island, in silent tribute to the spirit of the child. According to legend, three young girls were playing and one of them drowned. A hermit named Don Julian Santana chose the remote island for his home and honored the spirit of the dead child by making a natural altar out of discarded dolls. He would bring them to the island and tie them to the trees. 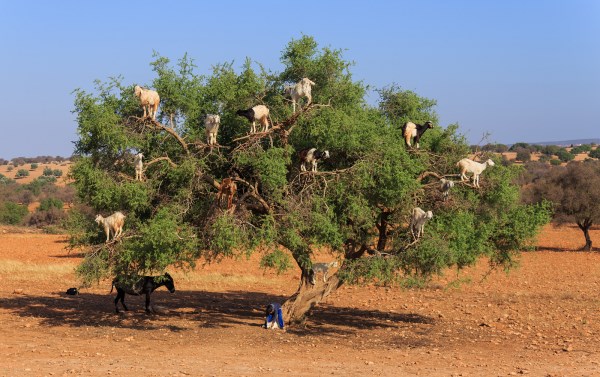 Before you jump to conclusions: no, these were not created by a bored geek in Photoshop. Amazingly, these uncanny animals are actually real; they climb the Argan trees of Morocco in search of food, which is otherwise sparse in the region. Over time they have become not only able to climb trees but downright adept at the art – they traipse across trees with a sure-footedness that is hard to imagine from a hoofed animal.

7Car Hanging on a Tree (Australia) 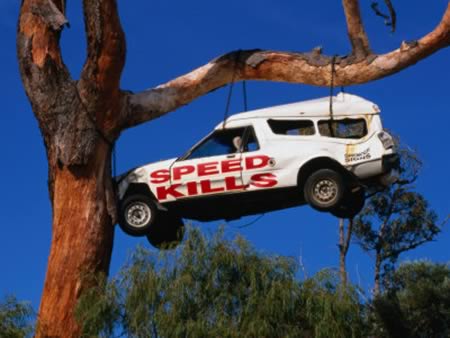 Car Hanging on a Tree - Safety Message on the Old Coast Road in South-West, Australia. 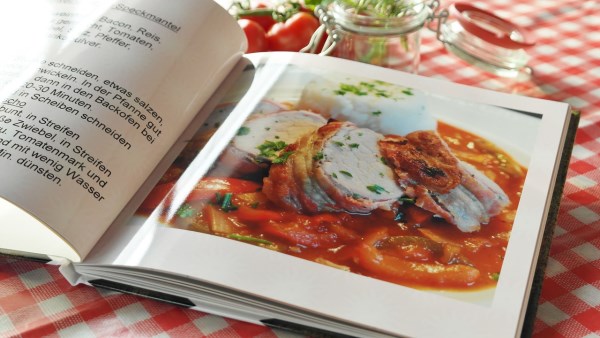 A tree adorned with hundreds of traditional recipes has been donated to an inner London estate by a cooperative of Irish farmers. On the tree in the estate's central hub, residents have begun hanging recipes in hopes of introducing neighbors to traditional dishes of different cultures.

It was designed by Helen Sharp, the Irish-born community artist, with members of the local community and East End homes.