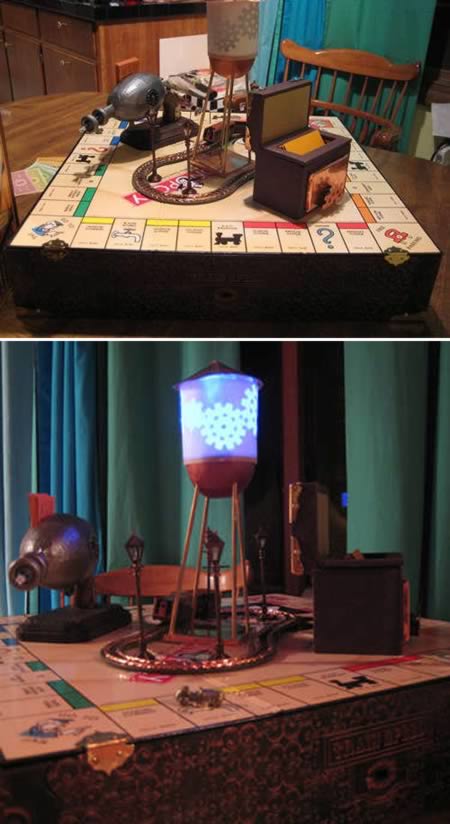 If you are a Monopoly fan, then you would love this Steampunk Electric Monopoly DIY that combines Steampunk Art, Electronics, and the popular Monopoly Board Game. This DIY Monopoly creation added some cool artifacts to the wonderful board game such as a water tower designated for the water company, ray gun for the chance cards, a steampunk train for the train stations, and also hooked up some switches to trigger when specific places are landed on. This creation adds a little extra flavor to the game we grew up on with some additional setting and interactivity on behalf of the board game. 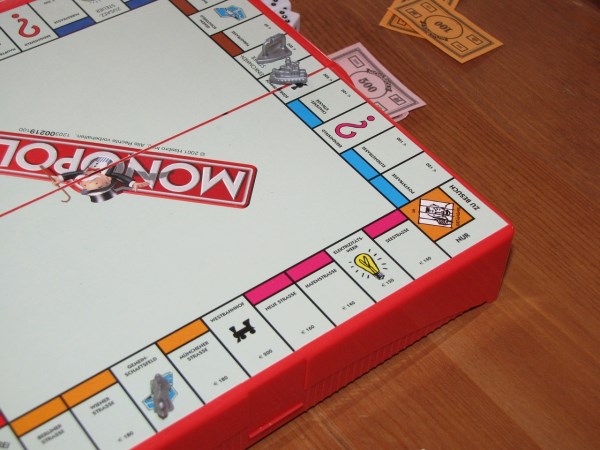 The world's most expensive incarnation of the Monopoly board game is headed to Wall Street. An 18-karat gold version of the famous Parker Brothers board game will be on display beginning Friday at the Museum of American Finance. The gold and jewel-encrusted Monopoly is estimated to be worth roughly $2 million. The set of dice alone is valued at $10,000 with 42 full-cut diamonds for the number dots. All of the properties that make up the game board are also set in gems, with some 165 gemstones in total. The ‘Chance' and ‘Community Chest' cards are photo-etched. The notion of creating a blinged-out version of the board game came about in 1988, when San Francisco jeweler Sidney Mobell heard about a Monopoly tournament taking place in London. He called Parker Brothers (now part of Hasbro Inc.) for permission and then set to work creating the golden game, working every day for a year straight. 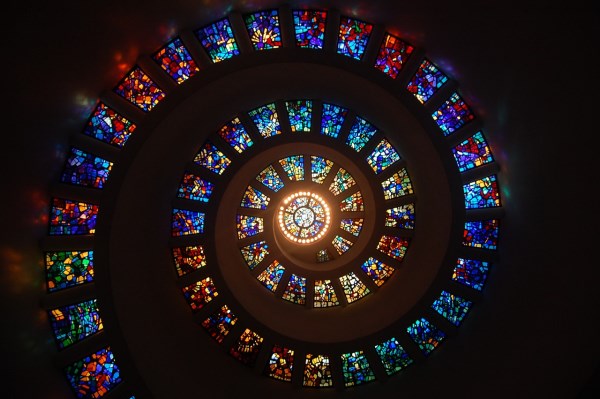 This round board made from oilcloth is one of 5000 made by Charles Darrow in 1933. This is the only circular Darrow Monopoly game known to still exist. It is hand coloured in pen and ink and the pieces are made of wood moulding. Darrow based his game on political activist Lizzie Magie's Landlord's Game which she created to point out social injustice at the turn of the last century. Darrow produced his game, set in Atlantic City, during the Great Depression when he was out of work and had a family to support. He sold the rights to Monopoly to Parker Brothers Games in 1934, putting an end to his financial worries. 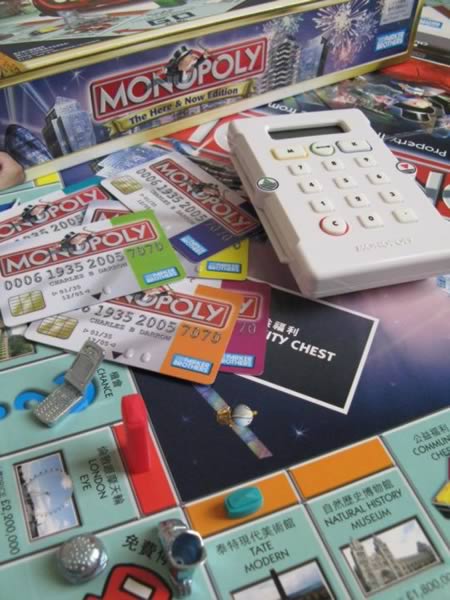 Still playing with Monopoly money? That's so, 2005. Now, you can play Monopoly with debit cards. Game makers Parker have phased out the standard multi-coloured cash in a new version. Players will instead use a Visa mock debit card to keep track of how much they win or lose. It is inserted into an electronic machine where the banker taps in cardholders' earnings and payments. It has 6 pewter pieces including a Segway personal transporter, an Altoids tin, space shuttle, flat-screen TV, baseball cap and a dog in handbag. 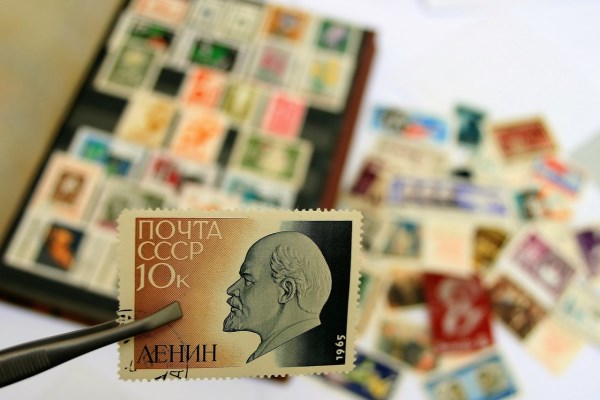 It's not quite the perfect fit – the ultimate capitalist board game and left-wing politics – but the creators of the new communist version of Monopoly, Queue, think it could be a big hit. Officials at the Research Institute in Poland have come up with the concept, which will see players tasked with buying a list of essential items like bread and toilet paper. Rather than try to force other players into bankruptcy, though, Queue will encourage them to line up in an orderly fashion to get into state-owned shops. Doesn't have quite the same ring to it as building a property empire, does it? Still, the game's creator Karol Madaj believes it will be a valuable educational tool – and fun too… probably. ‘The game not only makes players understand shopping in Poland under communism. It also teaches them what queueing is like – something people seem to have forgotten,' he said. Sounds brilliant, right? 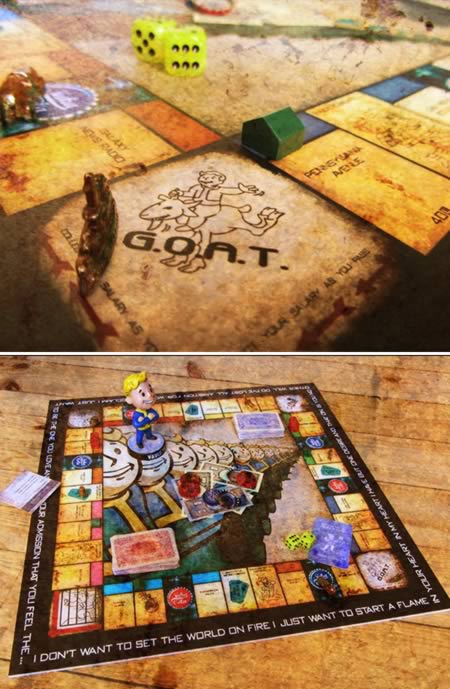 Elisabeth Redel made a Monopoly game for her boyfriend fashioned after the video game Fallout! The streets are locations from the game instead of Atlantic City. Even the cards are Fallout-oriented.

The board was printed on a 50 x 50 cm PVC plate. Every street is a location from the Fallout game. “GO” is now “G.O.A.T.” and “free parking” is the “please stand by” screen. Every card has one of the Fallout3 or Fallout New Vegas perks on it and has a really cool old playing card image on the back. 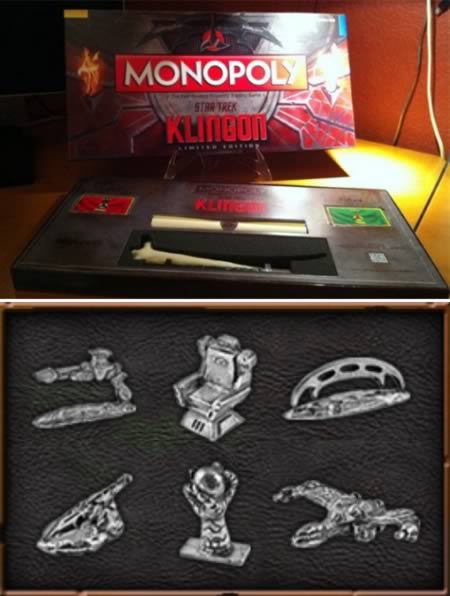 Finding the perfect gift for the geek in your life may be a difficult task, especially if that geek has everything he needs or wants. But if your geek can't get enough of Star Trek (in spite of the several costumes he or she has in the closet for special occasions), then here is the best thing that you can get. Enter the new limited edition of the classic board game Monopoly. Star Trek Klingon edition. It really can't get any better than that for Trekkies, can it? The details of the entire game – properties, what the game board looks like, and so on – have not yet been revealed. 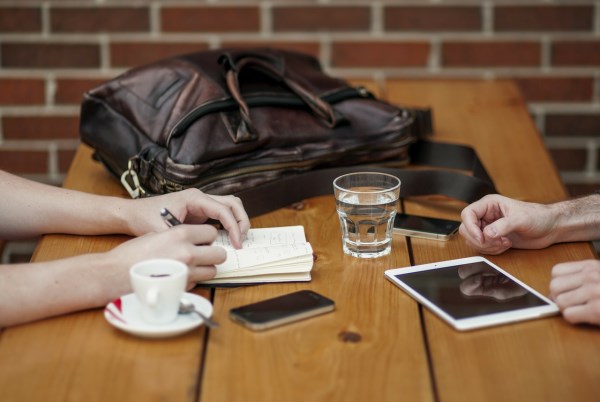 After decades of pointless video game adaptations Monopoly has finally found its natural home on the iPad. The game mimics the real thing beautifully on the iPad – thanks to iPad's awesome display. The author of the game is Electronic Arts, that's a really good hint to sum up how the game might be. Just brilliant and very entertaining!

9There Will Be Monopoly 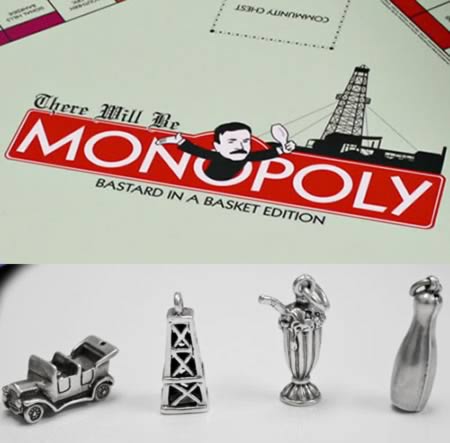 Do you love There Will Be Blood? Do you wish that there's some sort of a board game to go along with the movie? Something that you can play while drinking some milkshake? Well, fret not. Here's There Will Be Monopoly. 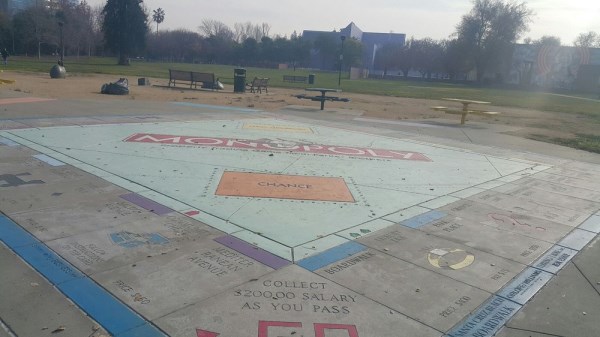 In San Jose, near the Children's Discovery Center in Downtown San Jose's Guadalupe River Park and Gardens, lies Discovery Meadow, home to the Guinness Book of World Record's acknowledged largest permanent outdoor Monopoly Board. Built in 1992 by the San Jose Cypress Granite and Memorial, it was originally for an exhibition at that year's San Francisco Landscape and Design Show. San Jose Beautiful purchased the set after the show, eventually housing it in Discovery Meadow which opened in 2002.

The board is 930 square feet. Each corner piece weighs 246 lbs and each standard side piece comes in at 140 lbs. Players play with gigantic dice, wear large token shaped hats simulating the car, the shoe, and other standard Monopoly pieces, and even have to wear prison uniforms if they are unfortunate enough to “Go Directly to Jail”.