Working on your computer doesn't have to be boring, meet ten creative and cool desks that will give inspiration for all your projects. 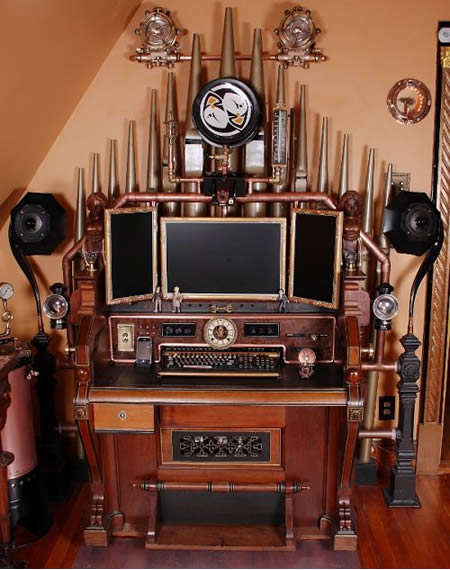 This is the ‘Victorian Organ Command Desk‘. It's made from bits and pieces of Victorian detritus that Bruce had collected including the carcass of a 19th century pump organ. It took 6 months to build using four different crafts persons to design the desk, restore and modify the antiques, and later install the computer systems. Included in this all-in-one workstation desk are fully integrated electronics including 3 monitors, computer, printer, scanner and webcam. The horn speakers on either side are installed in cast iron stanchions and modified with modern acoustic suspension drivers. 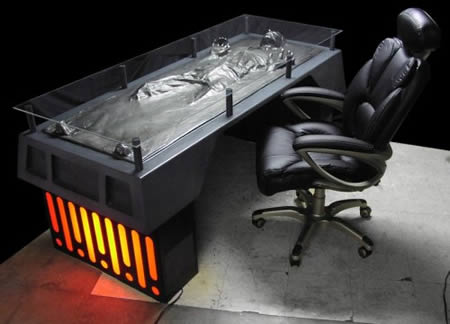 Who wouldn't want a desk with Han Solo encased in carbonite? This desk was designed and assembled by artists Tom Spina and Richard Riley of Tom Spina Designs, a NY-based company specializing in custom sculpture. 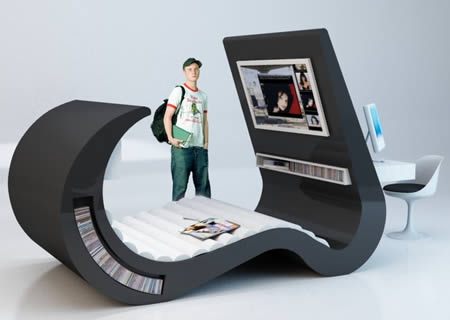 Teens,like, want to do everything at once, right? Designed for teenagers in a competition, Roberta Ramme's chaise lounger contains a desk, flat screen and media storage. Their blurb makes it "perfect to watch TV, listen to CDs, read, talk on the phone, take a nap or surf the internet, or even study." Go figure, like, whatever. 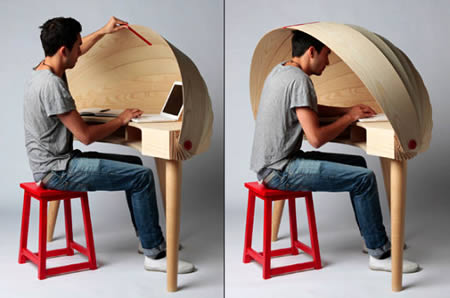 Do you live in a crowded house and suffer from lack of privacy while working? Your lucky day today! Sophie Kirkpatrick has the perfect solution for your plight; a desk with a hood! Pull it up when you want to shut out the world and concentrate on the task; pull it down when you are ready to mingle. The Duplex Workspace is a one off prototype but the inventor is looking into developing the concept and is currently on the lookout for the funding and facilities to do so. Talk about cool desks! 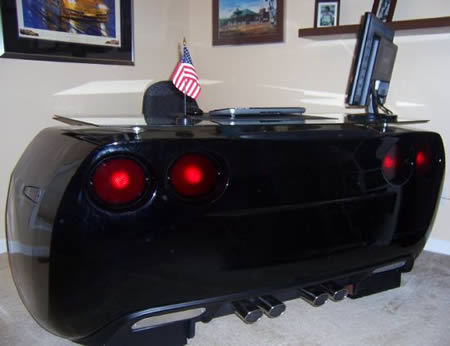 This desk is absolutely beautiful. Hand Built from the back of a wrecked C5 Corvette. The only ugly part of this desk is its tag price of $2590. 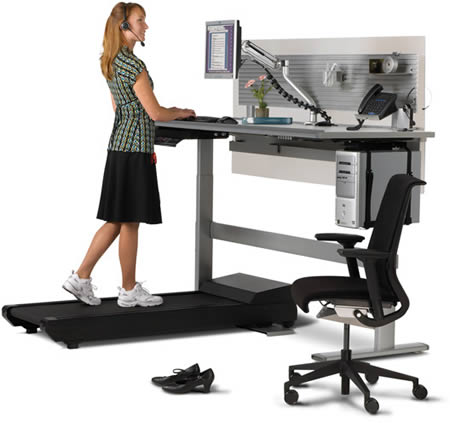 The Sit-to-Walkstation ($4,899) is an adjustable desk with a treadmill mounted to its base. With the push of a few buttons, the user can go from standing there crunching numbers to burning off a few calories while doing the same. A monitor mounted to the desk shows the treadmill's speed (.3 mph to 2 mph), how many calories have been burned, and the duration and distance of the walk. According to Steelcase, the treadmill is so quiet it will not disturb your neighboring co-workers. However, we imagine the slap of our feet and our heavy breathing would be enough to drive them insane. 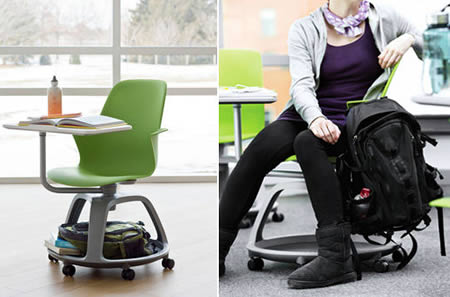 IDEO and steelcase teamed up to design Node, a school desk that combines storage, a chair and a writing surface all in one mobile unit. Research showed that many teachers are using multiple modes of teaching to help students with different learning styles. Despite this shift, most student furnishings are still designed for a single mode. Node allows students to easily shift from one teaching mode to another using a single piece of furniture. The seat is mounted on a rolling platform that has storage for their belongings underneath and a large writing surface with a hook for hanging a bag. The seat is a single shell and the table is large enough for writing and laptop use. 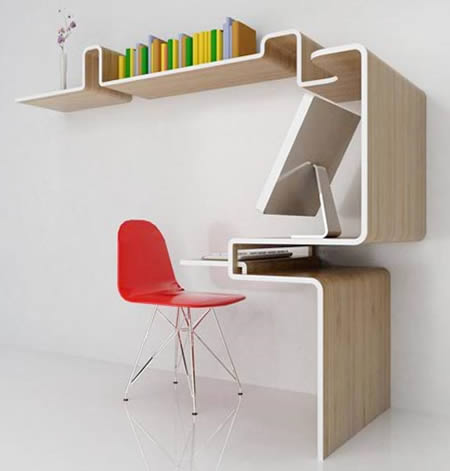 Talk about space saving. No one knows exactly if it's in production or just a design but regardless, a cool idea. 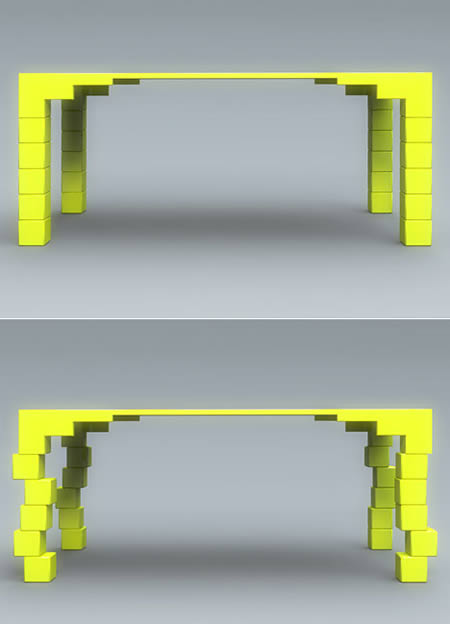 By surrounding its thin (and hopefully sturdy) steel legs with movable blocks, the somewhat cleverly named UnsTable creates the illusion that it's on the verge of collapsing. The novelty would probably wear off pretty quickly, and the table doesn't have a great deal of mileage as a prank device. I mean, you've got to lure someone to your weird yellow desk, sit them down and have them scatter important, delicate items across its surface, just so you can sort of kick one of the legs to the side and make them think, for just a second, that their stuff would be broken. In any case, it's an attractive desk. 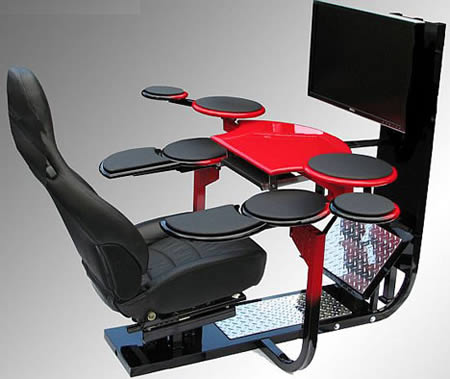 Look at this desk and tell me if you're not thinking of banging on those pads like Larry Mullen of U2. Well, budding skin-banger, this is not for that purpose. The Vision One Computer Desk is for working or gaming. It has a luxurious, adjustable leather seat and comes in original, flagship and corner variations and is available in a range of colors including red, orange and blue.
It took the designers three years to bring this video game-style station to the market. The Vision One Computer Workstation is the ultimate home entertainment computer desk. The V1 computer desk can be used as a computer gaming chair, flight simulator, racing simulator, cad workstation, video editing workstation, sound editing workstation, personal movie theater, surround sound music environment and more. They are hand-made in the USA and it has guy thang all over it.