Every dog owner has gagged when their pooch releases a small biological weapon attack in the living room. And today, on April 8, we celebrate that fact.

No, we’re being serious. It may not be a federally recognized holiday, but Dog Farting Awareness Day is a real thing.

So, to commemorate this occasion, we’ve collected here a small info package on the day, the farts of dogs, and what they could mean. 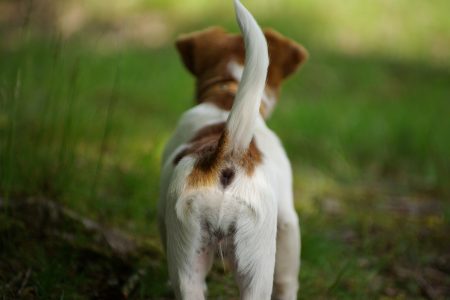 What is Dog Farting Awareness Day?

Dog Farting Awareness Day is exactly what it sounds. It’s a day to raise awareness of the fact that dogs fart.

This strange awareness was born on, where else, social media. As far as we can find out, the first Dog Farting Awareness Day took place in 2014.

The first celebration was a common effort between the Animal Rescue League of Iowa, the Heritage Humane Society, and various dog owners. Though in the name of honesty, it was less of a serious attempt to raise awareness and more of an excuse to make some memes.

But people liked those memes, and why wouldn’t they? Fart jokes are as old as humanity itself, and it’s something every dog owner has to deal with.

Though it may be rooted in memery, the Dog Farting Awareness Day has evolved since its conception. Today, it’s a way for animal organizations and dog enthusiasts to spread knowledge of why dogs fart — and the potential health issues their toots could indicate.

Why Do Dogs Fart?

To begin with, dogs fart because they’re living animals. Just like you and me, their intestines produce gases as they digest food, and that gas has to come out one way or the other.

So, if your puppy lets one rip every now and then, that’s no cause for concern. But if the dog farts a lot, it could be a sign that something’s not quite right.

The most common cause for increased flatulence with dogs is that they happened to swallow some air. This could happen if they eat or drink too fast, which is particularly common when dogs eat together.

However, excess air could also be a sign of respiratory disease. If your dog has trouble inhaling, they will breathe at a higher rate which could lead to them gulping air down the wrong pipe.

A sedentary lifestyle could also mess with a dog’s intestines and cause it to fart excessively. Eating something it shouldn’t — like beans, dairy, or high-fat or high-fiber foods — can make your dog blast out of its ass.

Finally, lots of farting could indicate that your dog is sick. Inflammatory bowel disease, irritable bowel syndrome, parasites, or cancer could all result if frequent farts.

When to Be Concerned?

It can be hard to know when exactly your dog’s farts start indicating trouble. Here are some things that could tell you that it’s time to go see a vet:

How to Prevent Dog Farts

To combat the stench wafting from your dog’s posterior, you have to address the underlying cause. The best idea to find that out is to see a professional vet. However, there are some things you can try first, like:

You can also try to make your dogs’ farts less smelly by giving them zinc acetate, yucca schidigera, or dry activated charcoal. However, do not that these won’t prevent farts — they’ll just reduce the stench.

Which Dog Breeds Fart the Most?

As we said, all dogs fart — but some dogs fart more than others. So, if you have one of the below breeds, your pup might just have been born gassier.

And there you have it — the basics of dog farts. May this information help you take better care of your furry friend of this Dog Farting Awareness Day, and on all other days.