They say that the eyes are the windows of the soul. That may be true for humans, but things get a bit more convoluted when you consider animals.

It’s a tough world out there in nature, and you need to constantly look for danger. And while our two front-facing eyes serve humans just fine, they’d be woefully inadequate for many animals.

As a result, some creatures have developed some seriously freaky-deaky eyes. They might work well for their intended purpose, but that doesn’t make these peepers any less bizarre.

Here are six animals sporting a pair — or more — of the freakiest eyes in nature. 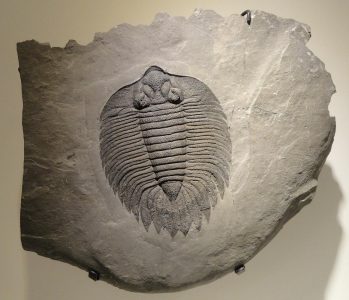 Eyes are soft tissue, so they usually don’t get preserved in the fossil record. It can be very difficult for researchers to determine what certain ancient animals could see.

Not so with the trilobites. We know fairly well what and how these primordial sea creatures perceived the world because their eyes had bones.

Well, not bones, but their lenses were made of calcite. This hard mineral fossilizes easily, so scientists have been able to study trilobites’ eyes in great detail.

We now know that they were some of the earlier animals to develop complex compound eyes, like those you see in modern insects. Oh, and their eyes were likely brown, in case you were wondering.

The tuatara really isn’t what it seems. You may think it’s a lizard, but these reptiles are actually the last living remnants of a much older reptile lineage.

You’d also probably think it has two eyes, but that’s also wrong. It actually has three.

On the top of a tuatara’s head is a third, parietal eye. It’s clearly visible in young tuataras but gets covered in scales as the animal ages — although it still remains functional.

The parietal eye has a retina and a lens like a tuatara’s regular eyes, but its nerves have degenerated. Long ago, the third eye was probably perfectly functional, but these days it can mostly perceive changes in lighting.

Scientists think the third eye helps tuataras stay in shade during hot days. It could also warn them of potential predators lurking above. 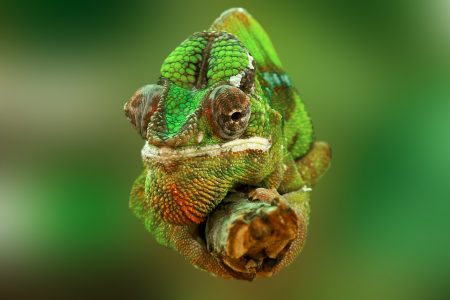 A chameleon’s eyes are less like eyes and more like an advanced camera system. This binocular high-tech bundle comes with two free-moving cameras and an in-built zoom function.

Chameleons’ eyeballs are encased inside their fused eyelids, leaving only a small pinhole for the pupil. The lizard can freely rotate each eye, being able to look at two objects at once with a 360-degree field of vision.

But once they spot a yummy insect, both eyes lock on the same target and the chameleon switches from monocular to binocular vision. It can even zoom on whatever it’s looking at to get a better picture — like the cops in the CSI series.

So, if you happen to be an insect and you notice a chameleon looking at you with both eyes… Don’t bother running, it’s already over for you.

Mantis Shrimp — Look at All These Colors 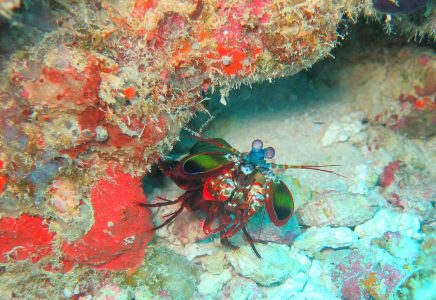 If you asked a mantis shrimp what it sees, it’d probably say, “Everything.” And it wouldn’t even be exaggerating.

To begin with, humans can see three channels of color — red, green, and blue. A mantis shrimp can see 12. Essentially, it sees colors we’re completely incapable of even comprehending.

Not only that, whereas we need two eyes to perceive depth, a mantis shrimp needs only one. There are all other kinds of weird things going on with their eyes as well that basically give them supervision.

Case in point — they can see cancer before it produces noticeable symptoms.

Researchers aren’t quite sure what on earth mantis shrimp need such complex eyes. A part of that is because we quite literally can’t wrap our heads around what they see. Our brains just aren’t wired for that.

Reindeer — From Blue to Brown 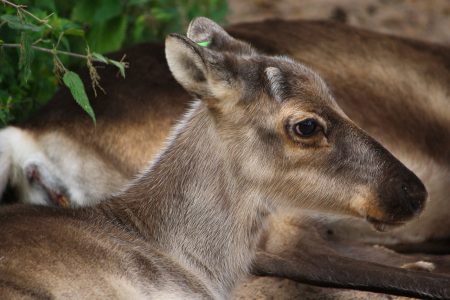 If you happened to meet Rudolf, Blitzen, or another one of Santa’s reindeer around Christmas, you’d notice that their eyes are blue. But go visit them in summer and suddenly Rudolf has golden brown eyes.

Reindeer’s seasonal eye color change is an evolutionary quirk stemming from their arctic habitat. In summer, the northern sun barely sets at all, while in the winter the land is covered in almost perpetual darkness.

Turning their peepers blue for the winter gives reindeer better vision in the wintery twilight of the arctic. Meanwhile, in the summer, the brownish color shields their eyes from glare. 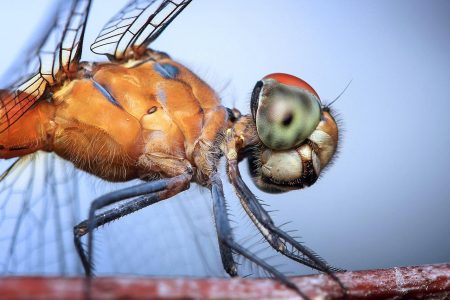 Should you happen upon a dragonfly, don’t wonder if it can see you. It can, with more eyes than you could imagine.

Dragonflies have the largest number of eyes out of any animal on Earth. Although it looks like the insect has two big globular eyes, each eye consists of thousands upon thousands of small lenses — each essentially functioning as an individual eye.

In total, some dragonfly species have nearly 30,000 lenses in each compound eye. They can’t turn their eyes, but they really don’t have to.

Since their eyes cover nearly their entire heads, they have almost complete 360-degree vision. On top of that, like a mantis shrimp, they can perceive color wavelengths that we can’t even comprehend.

The amount of visual data a dragonfly’s eyes capture is so massive that researchers aren’t quite sure how their tiny insect brains can process all of it.