The lost city of Atlantis is more than just an underappreciated animated movie from the early aughts; it’s a mythical idea that exists around the world. Great floods are common in myths, as is the notion of an idyllic island of peace and prosperity just sinking into the ocean. But there are places worldwide that have actually disappeared beneath the ocean’s surface. And, if we don’t do something about climate change soon, there’s about to be a bunch more. Here are five submerged cities from around the world.

An earthquake two millennia ago sunk a 5,000-year-old city. Now, these submerged pyramids are all that’s left. At least, that’s what some believe. However, others aren’t convinced the site is the man-made remains of an ancient city. It could be a group of naturally formed sandstone pyramids. Where some see sculptures, paintings, and carvings referencing mythical creatures, others see random erosion and markings from animals.

Krishna founded this holy city, now submerged 120 feet underwater. It’s one of the four Dharmas for pilgrimage for the Hindu religion. In fact, scientists believe the remains are at least 9,000 years old, and the city was once crucial for trade between the Middle East and India. Descriptions of Dwarka appear in many ancient texts describing 900,000 palaces constructed with crystal, silver, and emeralds. 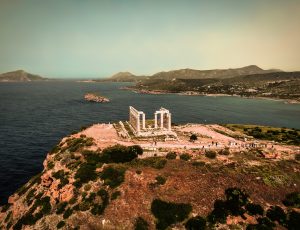 Just like other submerged cities, scientists suspect a series of earthquakes sank the city of antiquities, Pavlopetri. It didn’t go far, just 12 feet underwater, and is one of the oldest archaeological sites on earth. The city’s remains date back five millennia. At its peak during the dawn of Western civilization, the city thrived for almost 2,000 years before it sank.

Once considered “the wickedest city in the world,” eyewitness accounts describe how the sea swallowed people and entire buildings. Port Royal was the home of Kill Devil Rum and plenty of pirates. The city founders built Port Royal on the beach, so when a 7.5 earthquake hit Jamaica, many of the structures disappeared into the island’s shores. Now the remains are 40 feet below the surface of the Caribbean.

An ocean didn’t swallow this city after an earthquake–it’s sunk into a lake! Authorities flooded it on purpose to create a hydroelectric power station. It’s beneath 130 feet of water and perfectly preserved. It didn’t receive a lot of attention for the next fifty years, but now people scuba dive in Qiandao Lake. These days, you can find remarkable photos and YouTube videos touring China’s Atlantis.