Despite the piles upon piles of research into life on Earth, there’s always something new to learn. For example, we’ve only recorded a small fraction of all animal species on the planet, particularly if you look into the oceans.

It’s no surprise, then, that last year scientists continued their tradition of finding both new species and fresh facts about the ones we’re already aware of. And as is usual for nature, some of the stuff they found is pretty bizarre.

Here’s a collection of some of the strangest (or just plain fascinating) animal discoveries from 2021.

In February 2021, researchers announced that they’d discovered what’s potentially the world’s tiniest reptile on Madagascar. The nano-chameleon, or Brookesia nana, is around one inch long — roughly the same size as a sunflower seed.

Scientists haven’t yet figured out why the chameleon is so small. It could be a result of island dwarfism, although the discoverers believe the nano-chameleon’s size is due to habitat loss.

According to its discoverers, the tiny chameleon raises questions about how small vertebrates can actually get.

2) Elephants Are Losing Their Tusks 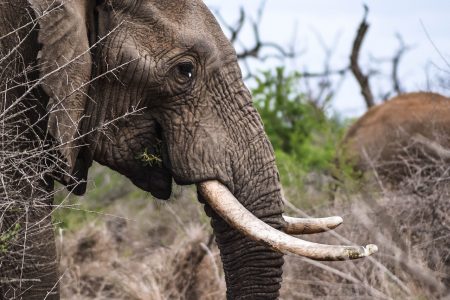 We all know poaching for ivory is a major threat to African elephants. This became a particular problem during Mozambique’s civil war between 1977 and 1992, when 90% of all elephants in the country’s Gorongosa National Park were wiped out.

But as Jeff Goldblum said in Jurassic Park, life finds a way. Last year, biologists made an interesting observation among the elephants of Gorongosa.

The elephant population has started losing their tusks. Since 1992, a third of female African elephants in the park never develop tusks in their life.

Before the war, only around 4% of female elephants stayed permanently tuskless. Upon further research, scientists discovered that the tuskless elephants had mutated copies of two tusk-producing genes.

What we’re seeing is evolution in real time. After all, poachers have no reason to kill off elephants without tusks, which helps the species survive.

3) A Whalefish that Changes Shape

The whalefish (not an actual whale) is not a new discovery. Scientists have been aware of its existence in the deep sea since 1895.

But for the longest time, they thought the fish was three different species. It took them more than 100 years to realize the whalefish actually undergoes a dramatic transformation as it grows.

The fish begins its life as a tapetail, a scale-less larval form with long tails and, frankly, ridiculous overbites. But these baby fish turn into adults, they start looking completely different.

If they’re male, they turn into what scientists call bignoses. They develop scales and a big bulbous “nose,” while their mouths and intestines wither away since they’ll never eat again.

Females, however, grow to a roughly whale-shaped body several times larger than the males. They also turn bright orange and develop sensory lines along the sides of their bodies to help them navigate the darkness of the depths.

And that’s the most we know about the fish. Since it dwells in the deep, there are still many mysteries left to solve.

If you don’t like the ocean, there are plenty of new species to be found underground as well. Synapturanus zombie is an underground that lives in the jungles of northern South America.

The frog got its slightly macabre name for its strictly underground living habits. To find them, scientists had to dig them out of the ground with their bare hands in heavy rainfall, leaving them looking like they’d scratched their way out of a shallow grave.

As far as we know, the only time the frogs came to the surface is during heavy rain. That’s when you can hear their short calls as the males try to attract any nearby females.

The frogs are immediately recognizable not only from their bright colors, but also from their honestly pretty stupid-looking long snouts. Just look at that face — it’s like the frog knows how ridiculous it looks.

If an animal loses its head, that’s usually the end of that particular story. But once again, marine life decides that it just has to be as alien as possible.

In March, scientists described two species of sea snails with a rather extreme method to rid themselves of parasites. They tear off their own heads.

But the snails aren’t committing gruesome suicide just to deny the parasites the thrill of a kill. The head simply crawls away like nothing happened and goes back to feeding on algae and detritus.

If the snail was young and healthy enough, it’ll grow a whole new body. Interestingly, the old headless body can also live on for several months as it slowly rots away.

Imagine how creepy it’d be if humans could do that.

Sea creatures shedding and regenerating body parts is nothing new, but this is one of the most extreme acts of voluntary self-mutilation researchers have seen. They’re now wondering whether there’s anything we could learn from the snails that could help human medicine.