Have you ever finished a book and felt like you didn’t really get what you just read? We can promise you, what you felt was nothing compared to trying to comprehend these documents.

Throughout history, people have written utterly incomprehensible texts, books, and manuscripts. Some of them are hoaxes or written in an intentionally unreadable script, but others resemble actual written text so closely that there must be some meaning to them.

Here are five documents both old and new(ish) that nobody can read or understand. 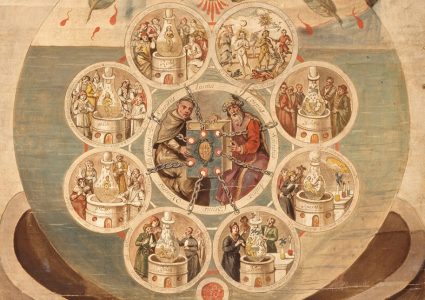 The Ripley Scroll — named after the English alchemist George Ripley — was written sometime in the 15th century. It’s an alchemical treatise that seems to deal with the creation of the Philosopher’s Stone.

We know this because unlike with many other texts, you can actually read the Ripley Scroll. It’s written in old English and Latin, so it’s technically readable.

But good luck trying to comprehend the instructions the richly illustrated scroll gives you.

The text references many obscure scientific, magical, and alchemical concepts, some of which seem to make no sense at all. It’s also unclear if the illustrations are part of the instructions — mostly because they’re occasionally at complete odds with the text that surrounds them.

We’d imagine reading the Ripley Scroll must be incredibly frustrating. You know what the words mean but you don’t understand what they mean. 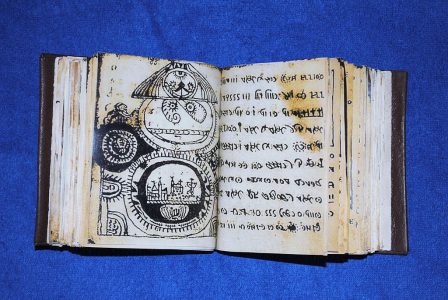 The Rohonc Codex emerged in the early 19th century in the city of Rohonc, Hungary (today Rechnitz, Austria). Hence its name.

The codex’s author is unknown. So are the language and the writing system used to produce it. The orientation of the text seems to suggest it’s meant to be read from right to left, but that’s all anyone’s figured out.

Over the book’s 443 pages, there are cartoonish illustrations featuring symbols from the Christian, Muslim, and pagan religions. Based on just the pictures, researchers suggest the book might tell a religious story.

Written on Venetian paper from the 1530s, the Rohonc Codex might be written in an artificial language, a cipher, or a forgotten ancient script. However, many current Hungarian researchers believe the book is a hoax and the text is complete nonsense.

But what if it isn’t?

While the Rohonc Codex might feature an ancient script, rongorongo is an ancient script. This writing (or possible proto-writing) system was discovered in the 19th century on Rapa Nui, or Easter Island.

So far, we’ve discovered about two dozen wooden objects with rongorongo glyphs scrawled on them. But what the glyphs have to tell us remains a mystery.

It could be that rongorongo isn’t a writing system at all and is just decorative scrawling. However, almost everything about the glyphs points to them being a writing system.

2. St. James: The Book of the 7 Dispensation 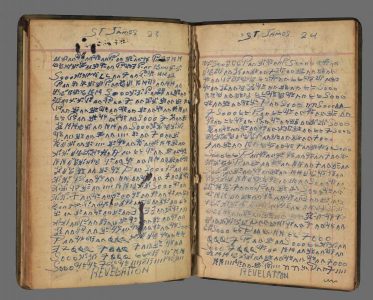 St. James: The Book of the 7 Dispensation is a 108-page notebook written by the janitor James Hampton. It was discovered after Hampton’s death in 1964, alongside a ginormous sculpture depicting the throne of god.

Some of the notebook’s text is in English, so we know its contents deal with Hampton’s religious visions and revelations. But most of the text is in an unidentified script whose meaning remains a mystery.

Considering the nature of the text, it may well be that the text is just random scribblings of a man having an extreme religious experience. But they could also hold information on what Hampton saw — or at least thought he saw — in his visions.

The book has been scanned and is available online. Do you think you could decipher its meaning? 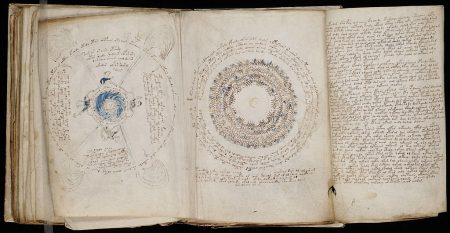 The Voynich Manuscript is probably the most famous incomprehensible codex yet discovered. And that’s for a good reason — its meaning and origins have remained a mystery for centuries.

The manuscript is written on vellum (or parchment) it’s written on has been dated to the 15th century. But the script and language used through its 240 pages are utterly incomprehensible.

There are many illustrations in the book, which appear to divide into six different parts, each focusing on a certain topic. Based on the pictures, researchers guess that the book might deal with issues of medicine and natural sciences.

However, nothing about Voynich Manuscript is certain. It might be an elaborate hoax, a late-medieval scholar’s hobby project, or a detailed account of secret natural knowledge that we just can’t comprehend.