Why do we love car chases in movies so much? Maybe they’re a catharsis for our road rage or a way to process the time we (used to) spend commuting or a natural evolution of all those car commercials we see. Regardless of why we love them, there’s no denying the depth of our passion for them. How else could Hollywood produce a 13 movie film franchise based just on cars going furiously fast? It’d be one thing if it were the only car-centric group of movies out there. But it’s not; almost every year, there’s a summer blockbuster built around a car chase.

The Fate of the Furious

It’s a bunch of best friends getting chased by a submarine and blowing stuff up together. Eight movies later, the franchise lost the grit of its early days, but the Rock’s addition more than makes up for it.

The opening scene features Tokyo-drift style driving to The Jon Spencer Blue Explosion. The real highlight of the sequence is a charming Ansel Elgort, the babiest of drivers, goofing in the car the way you do when someone takes too long in the bank.

Keanu Reeves gets vengeance for the murder of his dog without ever leaving his car. Tidy. 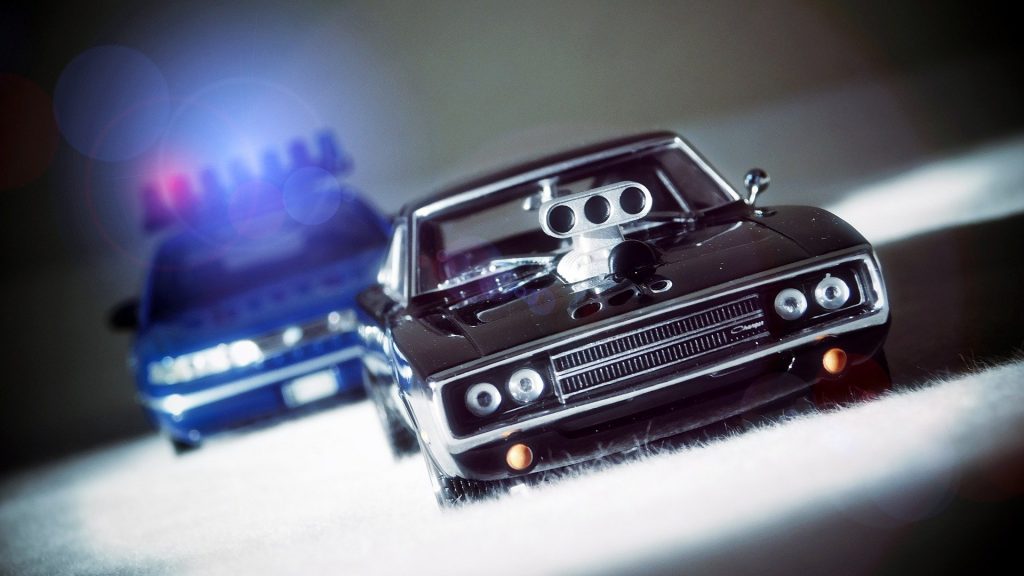 Car chase comedy isn’t easy, but they sure make it look that way.

I’ve seen this movie a dozen times. The only plot point I remember is Robert DeNiro reciting the recipe for a Grasshopper.

I don’t think this is a top-five movie, except I’ve carried this scene in my memory for the past 13 years, so that has to be worth the number five spot. It’s got the classic John McClain muttering, a 50-something Bruce Willis jumping from a police cruiser, and, in the whiny words of Justin Long, he “killed a helicopter with a car.”

The Fast and the Furious

The movie that started it all. First, I can’t get over how small Vin Diesel is back then. He’s twice the size he was in Reddick, but still, just a wisp compared to how big he’d eventually get. Also, baby Paul Walker. Classic movie, classic car chases.

Well, it’s a great movie that also happens to be one, very long, car chase scene. There’s just so much weirdness. Revise that, there’s just so much, period. The amp car, the fireballs, the War Boys, those VW Bugs covered in spike? What is going on in this movie? It’s great.

How crazy was this movie when it came out? Kurt Russell hits a pitch-perfect performance as a car-obsessed serial killer who messes with the wrong women. The inversion of the classic man-prays-on-women story is just so satisfying.

Universally lauded as the best car chase scene of all time, it’s got a great car, a great location, and hands down some of the best Foley work to come out of Hollywood in the entire decade. As Lt. Bullitt, Steve McQueen chases baddies through the street of San Francisco in a ‘68 Ford Mustang.