A couple weeks ago we wrote about the dumbest tourist ever who tried to pet a lion in Tanzania. Now a woman in Romania has proven that you don’t need to travel to Africa to almost get mauled by wild beasts.

The incident reportedly happened in Bacau, Romania, in late June. An unnamed woman decided to pose for a photo with a wild bear that had stopped by the side of a road.

The bear, who clearly didn’t appreciate being made into a photo prop, lunged at the woman. A man by the name of Alessandro Bacaoanu managed to get the whole scene on video.

In the video, we can see the woman – dressed in a white shirt and blue shorts – gingerly approach the bear.

A voice in the car Mr. Bacaoanu is sitting in expresses exasperation at the young woman’s antics. According to LADbible, the translation goes: “I have to film it. Look how she is holding her hand, stupid girl.”

While the commentary is pretty rude, the person speaking is not exactly wrong. The video next shows the bear, which appeared calm, suddenly launch at the woman.

She bolts and runs off to the road, accompanied by gasps from the onlookers on the video. Luckily, the bear decides she’s not worth mauling and sits back down.

“Can you see how stupid she is? Go into the car. All that risk for a picture with a bear?” one of the people taking the video chides her. Soon after, the woman had disappeared into a black car.

She’s not only lucky the bear didn’t get her, but also that there wasn’t any traffic on the road. Her mad dash could’ve easily gotten her run over. 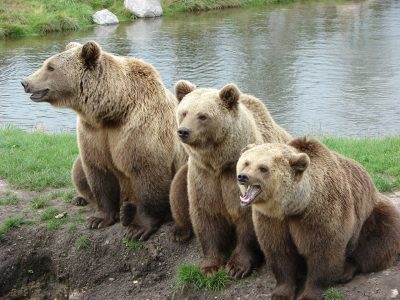 A Legacy of Bloodshed

In addition to heckling comments from an online audience, the incident has drawn condemnation from the authorities. It seems their repeated warnings to not approach bears encountered by roads are falling to deaf ears.

Romania’s Minister of the Environment, Costel Alexe, said: “The bear is a wild animal protected by law, not a pet. I say once again to the citizens of this country: a bear which has tasted biscuits, wafers, and feels that he can get his food in this way, will never be able to adapt to the forest again.”

In all seriousness, the authorities are doing the right thing by repeatedly telling people to stay away from bears.

After all, Romania has the largest brown bear population in all of Europe. Anywhere between 6,000 and 10,000 bears roam in Romanian forests, Member of the European Parliament Vincze Loránt told BalkanInsight.

As a result, Romania also records the highest number of brown bear attacks on people in anywhere on the planet apart from Russia. Between 2010 and 2015, 131 bears attacked people in Romania, leaving 11 people dead, a 2019 study published in Nature said.

In 2019, bears killed eight people in the country, according to BalkanInsight. A BBC report from November 2019 said three Romanians lost their lives due to bear attacks during that month alone.

Those are some grim, grim numbers. The woman caught on the video can thank her lucky stars she didn’t join these morbid statistics.

As the numbers show, the growing population bears in Romania has become a real problem. At the frontlines of the issue are Romanian farmers.

Not only do the bears attack people, they’ve killed livestock and destroyed crops. Numbers of road accidents involving bears have also increased.

“Everywhere I go in this area people are saying that there are too many bears, that you can’t produce any crops anymore,” Karoly Pal, a farmer in the region of Transylvania, told the BBC.

“People are forced to abandon agriculture and their land, and they are afraid to go outside the villages.”

Due to the number of incidents, Romanian politicians are lobbying the European Union to lift the ban on bear hunting in the country. They see culling their numbers as the only effective measure to control the bears.

Romania banned the hunting of brown bears in 2016. Despite their high numbers in the country, the brown bear is an endangered species in Europe.

No matter the politicians’ claims, though, the bears are not solely responsible for the attacks. They must eat up to 20,000 calories and wander across great distances in search of food.

Destruction of woodlands and forests may have driven the bears into closer contact with humans. However, MEP Loránt denies that deforestation is behind the issue.

“In the county of Harghita, for example, the surface of forest has increased by 4% in the last seven or eight years. Bears don’t look for dense forest but prefer areas where vegetation is lower, because they can find fruits and other food more easily,” he said.

It’s no wonder then that the hungry bears are drawn to farms. Whatever solution the authorities come up with, hopefully they can figure it out quickly.

Not everyone can run like the woman from the video.