It seems these days the consumers are growing more health-conscious by the minute. That’s especially true if you look at the amount of plant-based alternatives to animal-sourced products that are flooding the marketplace.

Dairy products are one of the areas where alternative products are increasingly popular. That’s not necessarily because of any animal welfare-related concerns, either. A lot of people (like your humble author) simply can’t drink regular milk without a seriously upset tummy.

From almond to soybeans, milk alternatives are varied and plentiful. Among them is the ever-so-popular coconut milk.

Which brings us to a dose of bad news for those who have adopted coconut milk as their go-to replacement for real dairy. A number of major U.S. grocery store chains are pledging to not stock coconut products from Thai suppliers accused of using slave labor to harvest their coconuts.

But it’s not people the producers are enslaving. Instead, they are using monkeys to pick the nuts from their palm trees.

Monkey slavery. Just when we thought 2020 couldn’t get any weirder. What’s next, snail labor camps?

Let’s see what this whole hubbub is about, shall we? 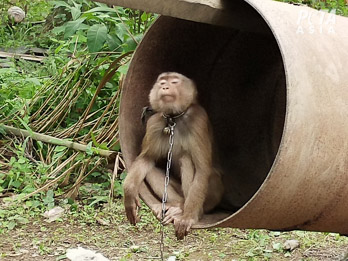 The monkey slavery accusations are made by none else than by the notorious People for the Ethical Treatment of Animals, better known as PETA. According to an investigation by the organization, Thai coconut producers are using questionable monkey labor to harvest the nuts.

PETA claims that upon visiting eight coconut farms – including those owned by Thailand’s largest coconut producer Chaokoh – it found disturbing proof of how the animals are mistreated.

“According to an industry insider, most coconut that comes from Thailand was picked by monkeys.”

The organization also claims that the monkeys face harsh punishments if they try to resist the training. Among the punishments is the forceful removal of their canine teeth to make them less likely to harm their handlers.

Additionally, the monkeys allegedly participate in “circus-style shows” in order to raise further profits from tourists.

“An investigator saw monkeys being transported in cramped cages that were barely large enough for them to turn around in and others left in locked cages in the back of a pickup truck, with no shelter from the driving rain,” PETA reports.

PETA itself has a somewhat dubious reputation as an animal welfare organization. As such, some may be inclined to take this news with a grain of salt. And by all means, it’s always healthy to be critical about your news sources.

Among the accusations piled against PETA, it allegedly kills a staggering number of animals housed in its animal shelters. PETA associates have also stolen animals straight from people’s yards, only to kill them hours later.

This time around, though, PETA may be on to something. Tourism Thailand, for example, lists the Samui Monkey Center as one of the attractions to see in the country.

“In the center, the monkeys will be trained to collect coconuts. Each training session takes about four months and requires a trainer and a student,” the site says.

The site also says that there are other “monkey shows” to see at the center. Among the listed monkey activities are jumping through hoops, memorizing numbers, playing guitar, and untying knots.

Whether the monkeys are mistreated as part of their training, we don’t know. But at least it seems that the monkey training and labor PETA is talking about actually takes place in Thailand.

Costco, and many of the other chains, take PETA’s claims – if not at face value – then at least seriously enough to take action. In a letter to PETA, Costco vice president and general merchandise manager of corporate food and sundries, Ken Kimble, explained the company’s reasoning for dropping Thai coconut products.

“We will continue to monitor the implementation of the harvest policies and once satisfied will resume purchasing,” Kimble said according to USA Today.

“We have made it clear to the supplier that we do not support the use of monkeys for harvesting and that all harvesting must be done by human labor.”

According to Kimble, Chaokoh has said that it is reviewing harvest policies at its coconut farms.

“We have re-engaged our suppliers, as well as other stakeholders, on this issue to re-confirm they are also protecting animal welfare,” Kroger told USA Today.

“It is not only our duty, but our integrity to take care of nature, human and wildlife, as a whole,” the company’s managing director Aphisak Theppadungporn told FOX Business.

“We have a clear-cut policy on this issue to ensure that our business will not tolerate any sign of animal and wildlife labor or abuse.”

Are the Thai coconut farms engaging in monkey slavery, or is this a case of PETA hyperbole? We at Oddee fully encourage you to look into the facts and make your own determination. Let us know what you think in the comments!