It’s usually about as far from a laughing matter as you can get when one country’s troops invade another. But in this case, you can’t help but chuckle.

In late May, a military force from Poland occupied a small part of the Czech Republic for around two weeks. Only, it was not a hostile invasion army and the soldiers who crossed the border had zero idea of where they actually were.

The border incident happened in the former village of Pelhrimov, just across the border from Poland in northeastern Czech Republic. The Polish troops had been patrolling the border as part of Poland’s measures to combat the spread of coronavirus.

For reasons as of yet unknown, they decided to cross the small Hrozová river that marks the border between the two states.

In the soldiers’ defense, both Poland and the Czech Republic are members of the European Union. As a result, the border is not always clearly marked and citizens enjoy free movement across the border.

Once in Czech territory, the soldiers who still thought they were in Poland fell on their usual routine and set up a border post near a chapel dedicated to Saint Anne, some 100 feet on the Czech side of the border.

The chapel had been abandoned and allowed to decay during the Cold War, but had recently been renovated with help from both Czech and Polish volunteers. 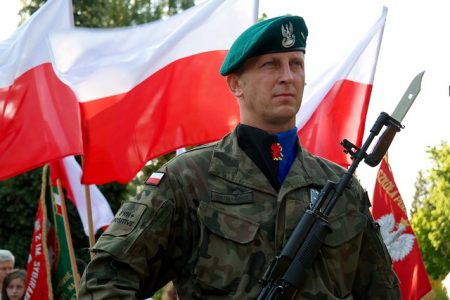 The invading force was first discovered on May 28 when a local construction engineer who had worked on the renovated chapel wanted to come and take pictures of the plasterwork.

Imagine his surprise then as, upon his arrival at the chapel, he was turned away by soldiers in foreign uniform armed with assault rifles and submachine guns.

According to the BBC, a local newspaper dispatched a photographer to the site who was able to confirm the man’s story about a roadblock and foreign military at the chapel.

A few days later, Czech environmental group Hnutí DUHA was due to have a meeting in Pelhrimov. The group had planned to visit the Saint Anne Chapel to take photos, but they too were denied entry.

Ivo Dokoupil, one of the group’s leaders, told the Polish newspaper Deník that he attempted to explain that the group was perfectly within its rights to visit the chapel, but the Poles would not hear a word of it.

“When a soldier with a submachine gun in a foreign army uniform starts ordering you around, it’s a horrible experience. They didn’t let me get closer than 10 meters (30 feet),” Dokoupil said.

“Why does the Polish army get to decide where I can and can’t go in Czech territory? The soldiers didn’t discuss the reasons for their mission in the Czech Republic with me.”

At this point, the story goes that the locals contacted the regional police force. The officers explained the situation to the Polish troops and ordered them to leave.

While the soldiers did not withdraw until June 11 when an official command came from their own country, towards the end of their occupation they did allow local visits to the chapel.

The day after Poland’s unintended military expedition ended, the Polish Defense Ministry issued a statement saying that the whole excursion had been a massive and embarrassing mistake.

While Poland did not officially confirm how long its soldiers were in the Czech Republic, they provided some explanation of why the troops were there in the first place.

“Soldiers of the Polish Army support the Border Guard in protecting the state border after its closure due to the coronavirus pandemic. The operation is led by Armed Forces Operational Command, which is in direct contact with the Border Guard,” the Ministry said as quoted by the CNN.

“The placement of the border post was a result of a misunderstanding, not a deliberate act. It was corrected immediately and the case was resolved, also by the Czech side.”

While the Czech military officials in its capital Prague said that they had not yet received an official explanation or apology from Poland, they confirmed that the Czech Republic had regained sovereignty over its entire territory and that they were ready to believe the operation was not intentional.

“Our Polish counterparts unofficially assured us that this incident was merely a misunderstanding caused by the Polish military with no hostile intention. However, we are still expecting a formal statement,” the Czech Ministry of Foreign Affairs said.

A History of Military Plunders

This incident between Poland and the Czech Republic luckily ended peacefully without a shot being fired, but in the past the two countries have had more serious border conflicts.

In 1919 the forces of Czechoslovakia – as the country was known back then – attacked Poland, resulting in the seven-day Polish-Czechoslovak War.

In 1938, as Czechoslovakia was about to be absorbed into Nazi Germany, Poland forcibly annexed the railway junction city of Bohumín and parts of what is now Slovakia that it saw as crucial to its interests.

The kinds of unintentional border crossings by armies as seen here are not as rare as you might think. Military planes accidentally fly into foreign airspace practically every other day, but often even ground troops seem unable to read a map.

For example, in 2007 nearly 200 Swiss soldiers hiked more than a mile into the neighboring country of Liechtenstein only to turn around as soon as they realized their mistake.

Then-spokesman for Liechtenstein’s interior ministry Markus Amman was a very good sport about the invasion at the time, saying that no one in the country even noticed the foreign forces.

“It’s not like they stormed over here with attack helicopters or something,” he told the Express.

In 2002, British marines made landfall in the Spanish town of La Linea instead of their intended target of the Gibraltar, where they were supposed to perform landing exercises.

The commander of British marine forces at the time, Lord West, recalled a phone call he had about the incident: “It wasn’t one of the best days in my time. I had a phone call from the military commander saying, ‘Sir, I’m afraid something awful’s happened.’ I thought, ‘Goodness me, what?’ And he said, ‘I’m afraid we’ve invaded Spain, but we don’t think they’ve noticed.’”