Five parrots were removed from a wildlife park after they were swearing at customers. The new birds arrived on August 15th and the parrots had a grand time during quarantine, teaching each other to swear.

The bird’s antics made the staff laugh, and only further encouraged the birds’ bad behavior. Once the birds began yelling and swearing in front of the guests, and laughing about it, action had to be taken.

“For the last 25 years, we have always taken in parrots that have sometimes had a bit of blue language and we have really got used to that. Every now and then you’ll get one that swears and it’s always funny. We always find it very comical when they do swear at you,” the park’s chief executive officer Steve Nichols commented.

“But, just by coincidence, we took in five in the same week and because they were all quarantined together it meant that one room was just full of swearing birds. The more they swear the more you usually laugh which then triggers them to swear again.”

“The park chief said they learnt to swear and laugh at each other swearing, leading to something akin to “an old working men’s club scenario”.

They were only on display for 20 minutes before there were reports that they were swearing at the customers. Visitors of course thought it was funny but at the same time, the park worried about the upcoming weekend when the park was expecting lots of children.

Despite the obvious entertainment of it all, the decision to remove the birds from where the children could hear them was made prior to the arrival of the kiddos. The birds will be put into separate groups to discourage the behavior.

“At least if they do swear it is not as bad as three or four of them all blasting it out at once,” said Nichols. 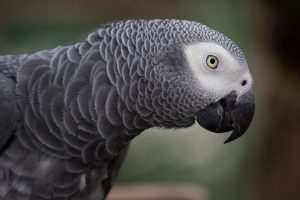 The parrots are African greys, birds that are good at learning vocalizations from all sorts of noises. The park just went viral in headlines around the world for a bird named Chico, and a video of the parrot singing Beyonce’s ‘If I were a boy.’

People have been coming to visit to see both Chico and the foul-mouthed duo, making for good business during a tough year.

“It has kept some kind of normality. It hasn’t brought any cash in and hasn’t made us secure but a lot of people have come to see him. It has been very hard. The charity is going to end up losing somewhere between £300,000 and £400,000 for this year.”

“It has been a real rough year, but we are the eternal optimists and we have no option. We have to keep moving forward. It is quite an unusual place where you are walking around and people are swearing at aviaries trying to get a parrot to swear back at them.”