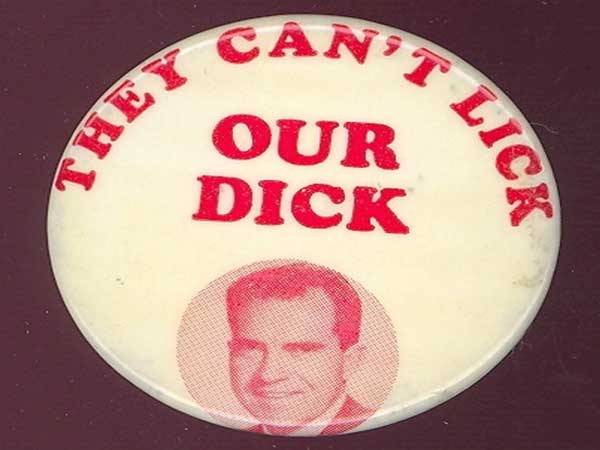 One of the more humorous, historic and unofficial campaign slogans was used on at least four different buttons for Richard Nixon in the early '70s. Another classic, "Don't change Dicks in the midst of a screw, vote for Nixon in '72," was also part of the election vernacular. Double entendres everywhere! 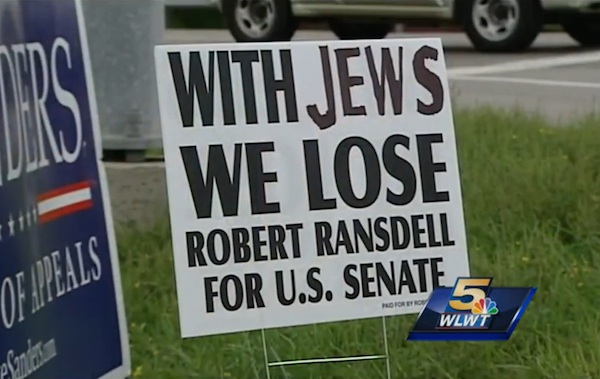 In the "what-the-hell-was-he-thinking" category, Robert Ransdell, an Independent candidate running for U.S. Senate, placed the offensive signs around northern Kentucky during his 2014 campaign.

The University of Kentucky got more than it bargained for when it invited Ransdell to speak during its Constitution Day festivities — he had his speech cut off when it veered into racist territory. The candidate considers himself a white separatist and believes "that there is no such thing as racial equality. You see that in our cities every day." 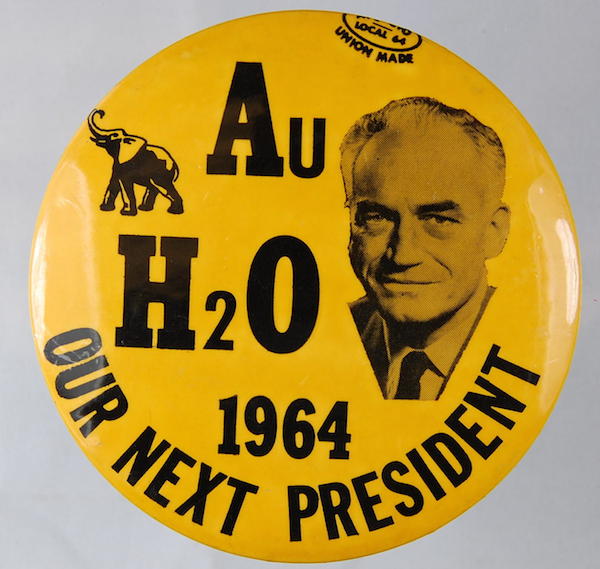 It might be a bit unclear unless you remember your basic high school chemistry — "AU" stands for gold, and "H2O" is water. Goldwater, get it?

Barry Goldwater was the Republican presidential nominee who ran against, and was defeated by, incumbent President Lyndon B. Johnson in 1964. AUH2O is still used as a political slogan by conservatives who espouse centrist and libertarian views, as opposed to those of the "religious right" aspect of the GOP. 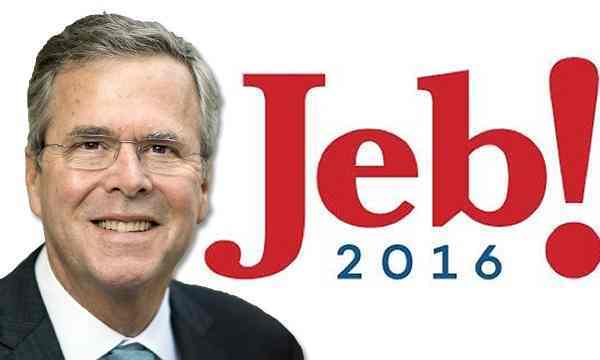 Poor Jeb Bush — he couldn't really get a foothold in the 2016 presidential election. Maybe it was this terrible logo/slogan, which was simply his name with an exclamation point. Just... Jeb! Whatever it was, the Internet had a field day:

In an unexpected move, it would appear Jeb Bush's presidential campaign will take the form of a musical. https://t.co/jiyqpdNsnX

In an unexpected move, it would appear Jeb Bush's presidential campaign will take the form of a musical. https://t.co/jiyqpdNsnX

Congratulations to Jeb Bush for his new daytime talk show on the CW! pic.twitter.com/ncGPEJxo8b 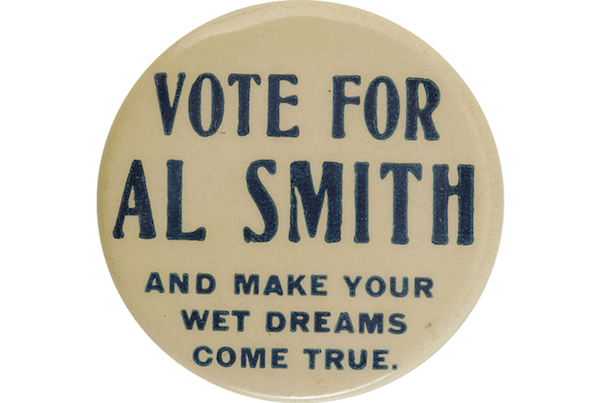 It's no fault of Al Smith's campaign that language takes on a different meaning over time. In the 1920s, proponents of the nationwide prohibition against the sale, manufacture, and transportation of alcohol were called “drys,” while opponents, like 1928 presidential candidate Smith, were called “wets." So, get your mind out of the gutter!

6"I'll Do My Best, But I Can't Promise Anything" (Jun Jun Sotto, Philippines) 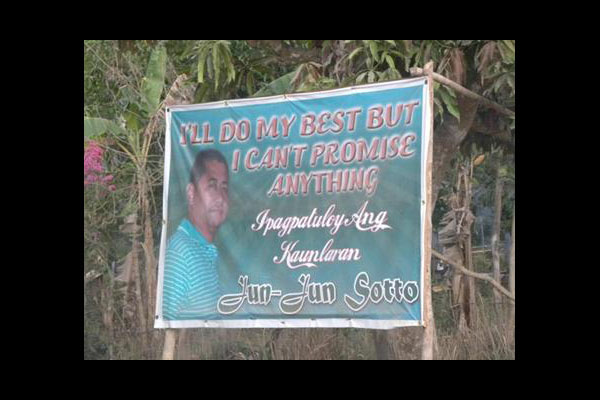 We don't know for sure if Filipino politician Jun Jun Sotto won whatever political post he was shooting for, but we do know that we've never seen a more honest campaign slogan.

7"In Your Heart You Know He's Right" (Barry Goldwater, Republican) 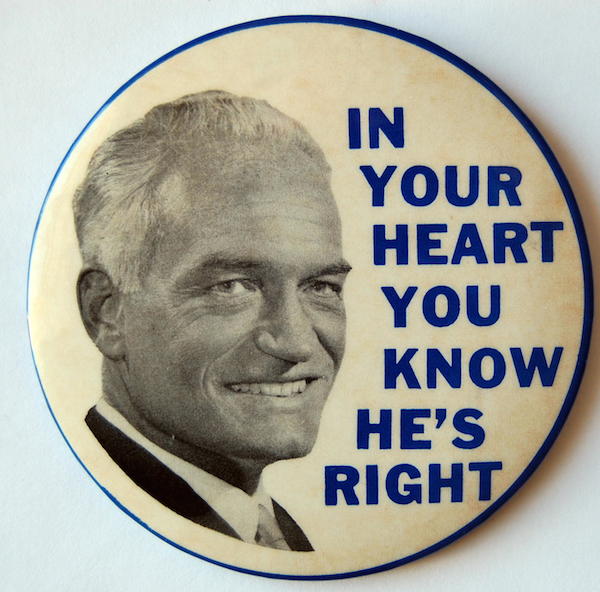 During his campaign, Goldwater received plenty of criticism from the media and opposition candidates saying he had extremist views. This slogan was used to combat the negative publicity and attempt to make the point that his views were not that different from most ordinary Americans, but doesn't it also give you the vibe that liking him was something you should be ashamed of?

8"In Your Guts You Know He's Nuts" (Lyndon Johnson, Democrat) 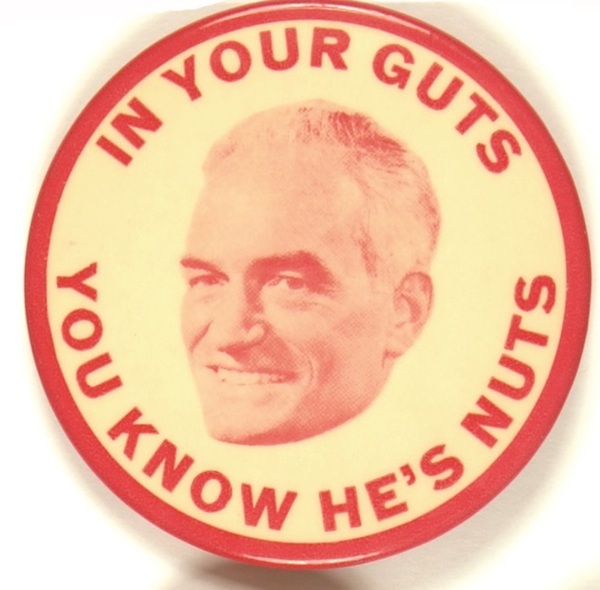 "In your guts you know he's nuts," and "in your heart you know he's right... far-right," and the Johnson campaign ad featuring a little girl pulling petals off a daisy while a nuclear countdown commenced never mentioned Goldwater, but the implication was clear that electing him would risk starting World War III. 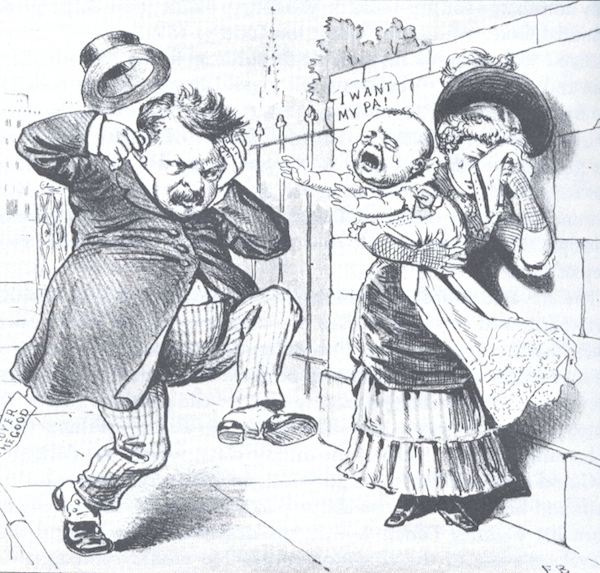 A former Speaker of the House and a Republican Senator from Maine, James G. Blaine, ran against the former mayor of Buffalo and the then current governor of New York, Grover Cleveland, in 1884.

The campaign was extremely bitter and focused on the candidates' shortcomings. (Sound familiar?) Years earlier, Cleveland had fathered an illegitimate child, but had taken full financial responsibility for his offspring and publicly acknowledged that he had made a mistake. Republican opponents, however, kept the matter in the public eye by chanting, "Ma, Ma, where's my Pa?"

Blaine was a family man but had apparently engaged in questionable investment schemes while on the public payroll. Much of the campaign furor revolved around the difference between private and public misdeeds. Democratic partisans used the refrain, "Blaine, Blaine, James G. Blaine, the continental liar from the state of Maine!"

Despite his indiscretions, Cleveland won, and his opponents changed the slogan to, "Ma, Ma, where's my Pa? Gone to the White House. Ha, ha, ha." Okay, none of these slogans roll off the tongue, but we suppose they got the point across.

10"Truman Was Screwy To Build A Porch For Dewey" (Thomas E. Dewey, Democrat) Why was Truman screwy to build a porch for Dewey? Did Dewey stiff him on labor? Did he not have the right permits? In truth, the slogan refers to a porch (or balcony) that Truman added to the White House in 1947, part of a larger renovation which continued through 1952. Dewey's supporters were certain of their candidate's victory in 1948, hence the reason why Truman was "screwy."