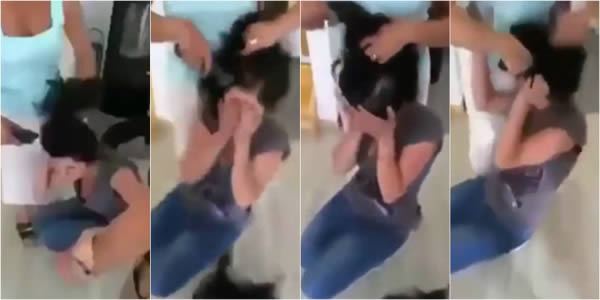 Bizarre footage has emerged of a mother appearing to shave her daughter's hair as a form of unusual and — some would argue — cruel punishment. The "scary shave" was one woman's reaction to her daughter bullying a bald cancer patient.

In the disturbing video, the girl can be seen sitting in a bathtub, crying and screaming as large clumps of hair are shaved off. Her mother can also be seen speaking to her daughter calmly while she runs the razor through the girl's hair.

The footage went viral on social media with the caption, “This girl bullied another girl at her school who has cancer, so her mom decided to shave her head.” 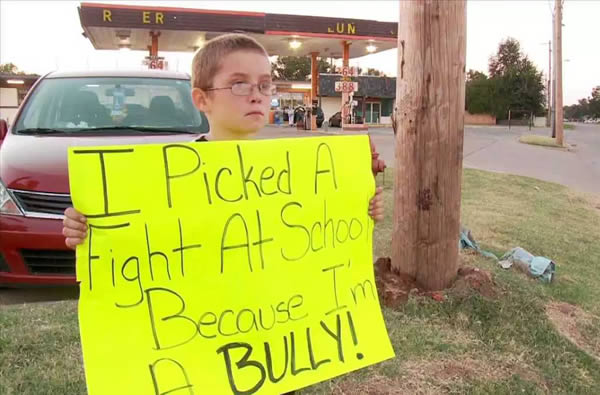 An Oklahoma mom made her 8-year-old son stand holding a sign reading: “I picked a fight because I'm a bully."

Janie Peterson came up with the punishment after getting a call from the school principal saying her son, Malachi, was being suspended for three days for fighting with another boy.

According to Malachi, he and the other boy were fighting over a girl. “Whoever won the fight, they got to be the girl's boyfriend,” Malachi said. Well, his mom wasn't having any of it. “He's 8-years-old. First off, there's no reason for him to be all about a girl right now, and second off, assault is assault whether you're eight or 88. I'm not going to put up with it.”

3The mother who forced her "cyberbullying daughter" into selling her iPod 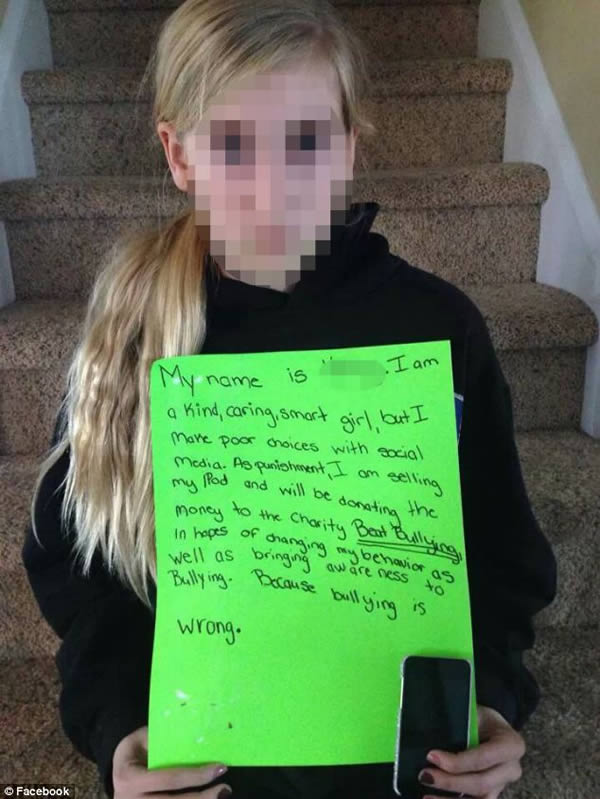 A mother posted a photo on Facebook to punish her daughter for cyberbullying. The girl is seen holding up a sign explaining that she made "poor choices with social media" and, as a punishment, will be selling her iPod and donating the proceeds to an anti-bullying organization.

Some have applauded this parent for teaching her daughter a lesson about bullying, but others argue that she is the one acting like a bully.

4The son who was punished by his tough dad with 4 am push-ups, gardening, and a one-on-one with the victim 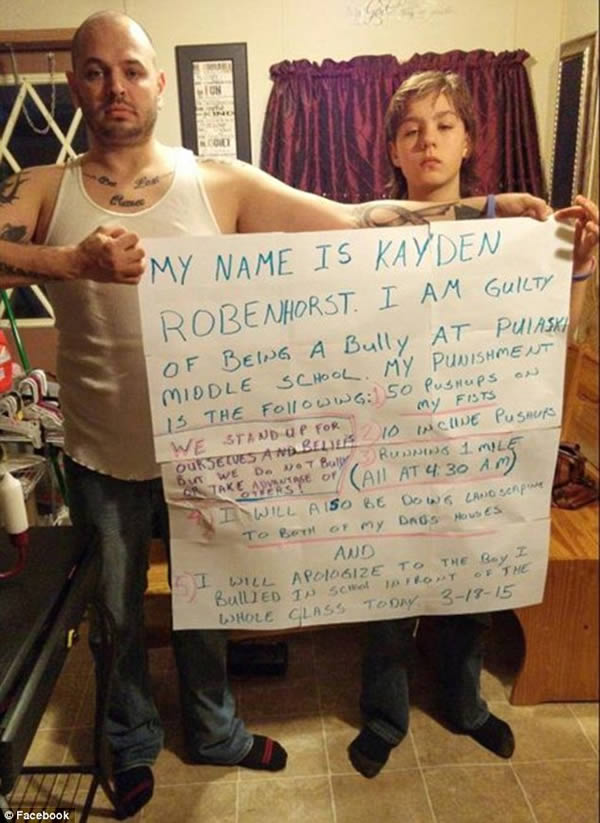 When Tim Robenhorst of Green Bay, WI found out his son Kayden was tormenting another student, he was rightfully outraged. He decided he had to do something to make sure his son never did anything like that again.

To make sure Kayden learned his lesson, Tim laid down the law with a five-part punishment. The boy now starts his day with a 4:30 am wake up run for 1 mile combined with a series of push-ups. He was then told to do landscaping work at two different houses his father owns. A public apology to his victim in front of the entire class was the cornerstone of the punishment.

The teen also posed for a photo alongside his father that featured a sign which declared what he did and why he was being reprimanded. Tim posted it on Facebook and encouraged people to share it because “nothing changes until you take a stand.” 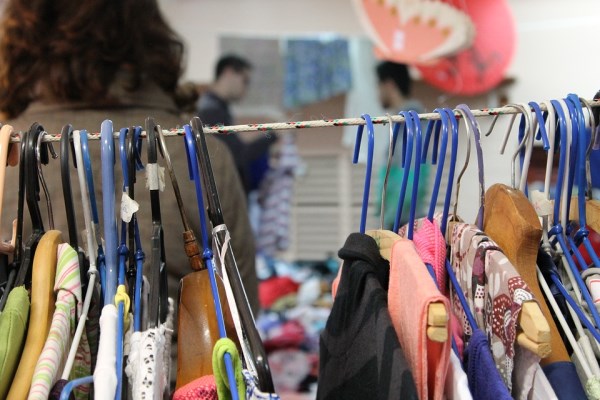 A Utah mother decided to use thrift store clothes to teach a lesson to her daughter, who had been relentlessly bullying another student because of how she dressed.

Ally, whose last name has been withheld, was informed by the school that her 10-year-old daughter, Kaylee, had been teasing another student about her appearance. Kaylee reportedly insulted her classmate so often that the girl no longer wanted to go to class. She showed little remorse when Ally confronted her about her bullying, so her mom made her wear unflattering clothes from a local thrift shop to see how it feels to be a target.

The punishment included two different outfits that her daughter had to wear on two different days in a row. You might think it was a bit harsh, but it worked. The child heard other kids picking on her behind her back and told her mom she wouldn't do it anymore “because it's stupid, and it's mean. It hurts them.” Well done, mom. 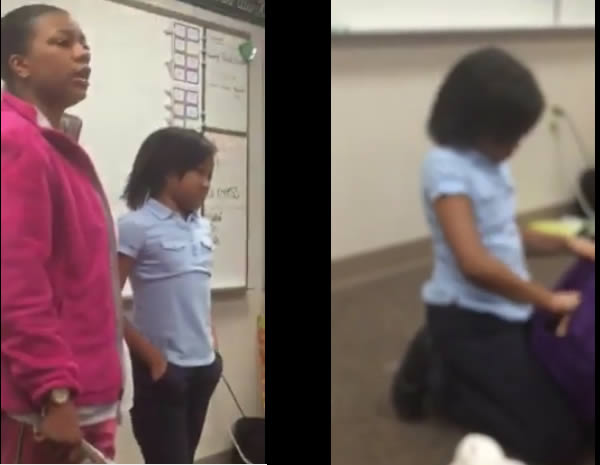 Facebook was on fire when a video with 215,000 shares and 12 million views captured a moment of public discipline from one mother and her daughter, a classroom bully. The mother is heard at the start of the video telling a class not to influence her daughter to do the wrong things (although she is her own person and old enough to understand right from wrong). She then instructs her daughter to address the girl she bullied and strikes her child in the face with a magazine when she doesn't look directly at her. The mother goes on to speak to the class about keeping their hands to themselves, and her daughter apologizes for her actions.

7The angry mother who publicly shamed her "bully son" on Facebook 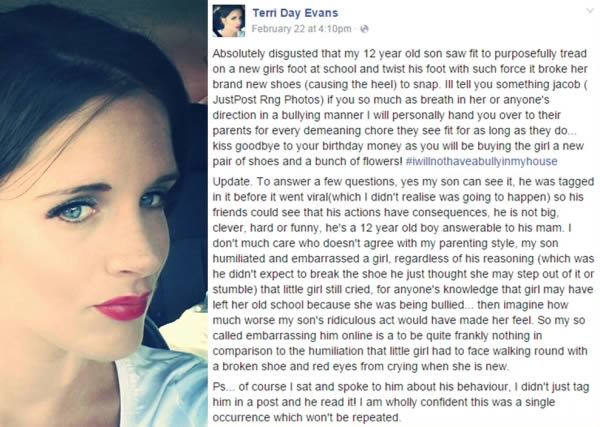 Terry Evans publicly shamed her son on Facebook after she caught him bullying a female student.

Terry, a single mother, outed her 12-year-old son Jacob on Facebook. She wrote that she's "absolutely disgusted" that her son "purposefully tread on a new girl's foot at school," which caused her shoe's heel to snap.

Since the post was uploaded, it has racked up more than 54,000 likes and has been shared over 11,200 times with people praising her "fantastic parenting." 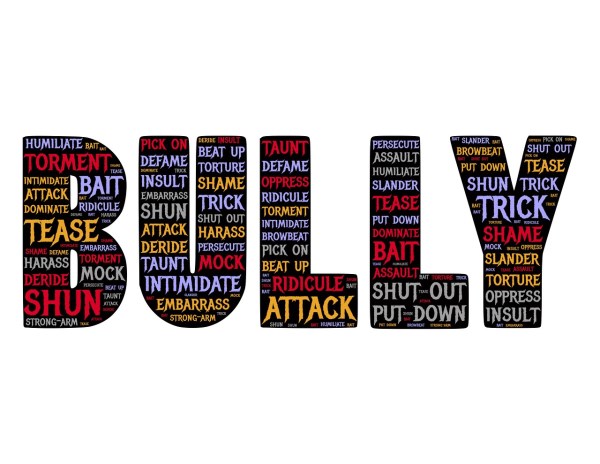 Jose Lagares discovered that 4th grader was a terrible bully. He knew he had issues tormenting other children at school, but he didn't realize just how bad it had become. He tried to discipline him in the usual ways, but the lessons didn't stick. That's when he decided to get a little creative — Lagares made his son hold up a sign by the side of the road confessing his sins.

Other parents weren't happy about what Jose did, but he stands by his actions. He wanted to stop bullying and show his son the humiliation he made others feel.