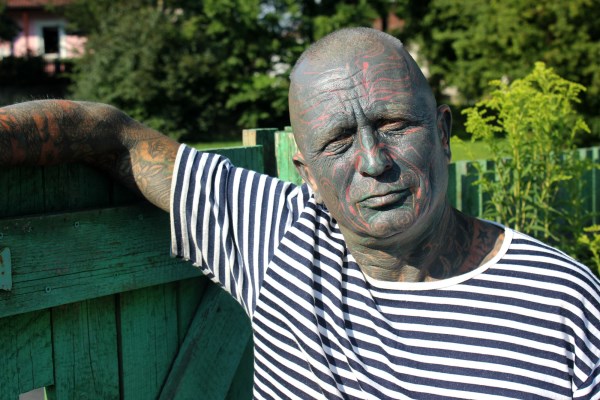 In 2013, politician, artist, and composer Vladimír Franz made headlines when he decided to run for president of the Czech Republic.

Franz, 56, is a very accomplished and fascinating man. He holds a law degree and is a drama professor, a postmodernist painter, a stage designer, and an opera composer. He has tattoos covering most of his body, as well as an array of piercings, and often has blue hair. He said of his look, “My tattoos are my private little garden. They are not a handicap; they are added value. Elections are not a beauty contest. It is all about tolerance.” 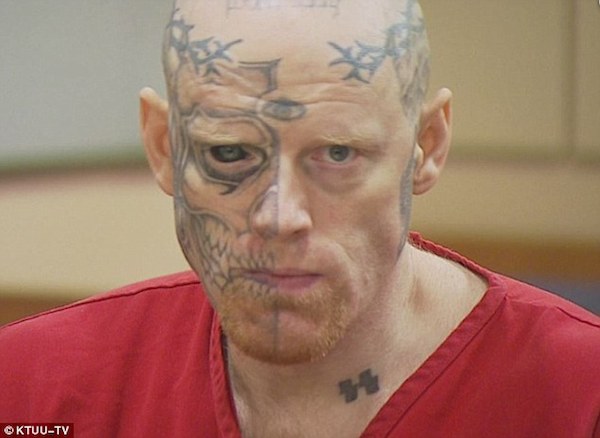 A heavily-tattooed man with an inked eyeball has been jailed for 22 years for attempted murder and other offenses for shooting at police officers who were investigating a string of burglaries in Alaska in January 2015.

Jason Barnum, 39, who is nicknamed "Eyeball," went on a crime spree that involved stealing cars and burglarizing homes to feed his heroin addiction, before driving to Merrill Field Inn in Anchorage. While at the motel, officers noticed a vehicle linked to the burglaries in the parking lot and went to Barnum's room to investigate, at which point the criminal opened fire from the bathroom. Two officers shot back, hitting Barnum in the right arm, before arresting him.

In court, Anchorage Police Department Chief Mark Mew urged the judge to take a look at Barnum's face which, he said, showed the convicted criminal had "decided a long time ago that his life was about being hostile to people." 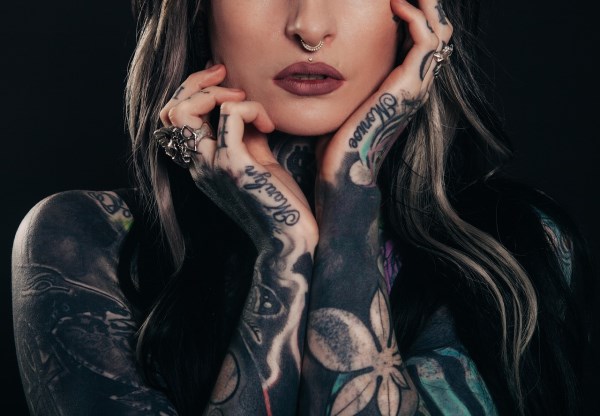 In 2013, a rogue tattooist signed his name in giant letters across his girlfriend's face less than 24 hours after they met.

Controversial tattooist Rouslan Toumaniantz became notorious when he inscribed a galaxy of stars over the face of Kimberley Vlaeminck, then just 18, in his studio in Coutrai, Belgium. Now Toumaniantz has struck again by tattooing his Christian name in lettering five inches high across another girl's face.

Lesya Toumaniantz, from Saransk, Russia, allowed him to sign the alternative spelling "Ruslan" over her face in huge Gothic script on the day they got together. The pair, who'd met online, have since wed.

4The man whose tattoo of his son covers half his face 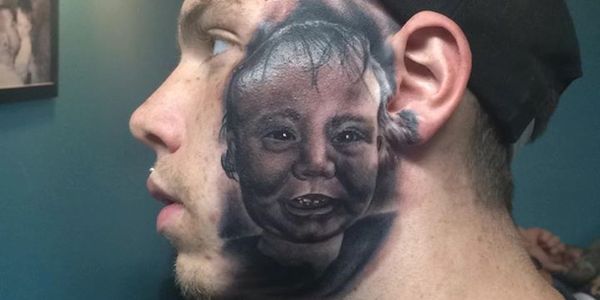 Christien Sechrist is a 20-year-old Houston man who made the unorthodox decision to cover the left side of his youthful visage with a massive, bruise-colored baby tattoo.

The smaller face belongs to Sechrist's son, Perseus, who had an apparent brush with death that prompted his father to pay tribute to the child in the most distinct way imaginable.

The tattoo has drawn a mostly harsh reaction on social media, but Sechrist loves it. “Beautiful tattoo of a beautiful face on top of another beautiful face,” he said when a Facebook user protested.

5The celebrity obsessed man who hopes his tattoos make him famous 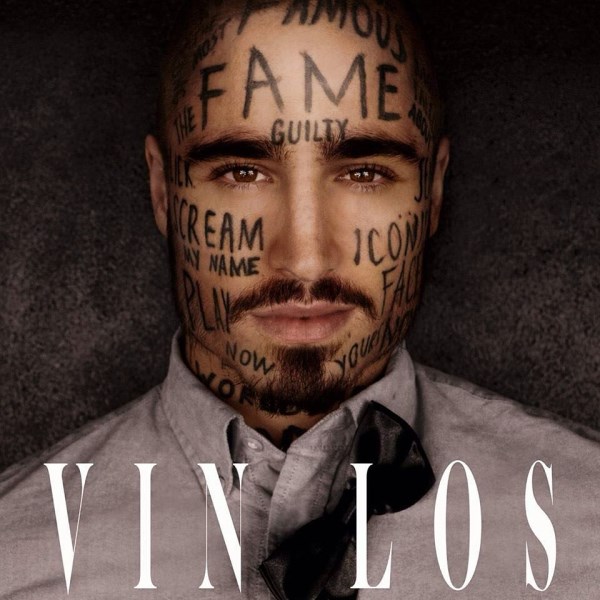 Vin Los' goal is pretty straightforward—to become the most famous man on earth. The face and arms of this 24-year-old Canadian model already look like a buzzword checklist. Words including “FAME”, “LICK” and “BAISE MOI" (f**k me) are tattooed in handwritten font all over his toned body, which is hairless unless you count all the tiny fake follicles he got tattooed on his chest.

Los says he wants to be a living artifact of our celebrity-obsessed times. "I want to embody pop culture. You could look at me in a hundred years and really get the idea of what pop culture was like in the early 2010s. I want to be an image for people to look at, something that has an impact." 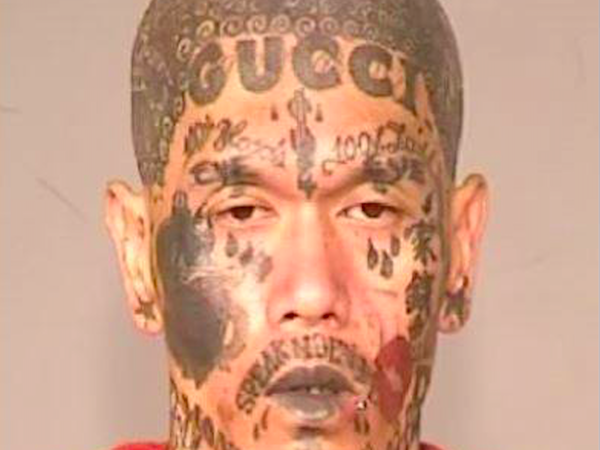 A Fresno man was arrested in March 2016 for possession of firearms and cultivation of marijuana, but it's his tattoo-covered booking photo that set his arrest apart from most.

Khamprasong Thammavong, 33, a documented Laos Blood gang member, was pulled over in Fresno, California for a routine traffic stop. When the officer ran Thammavong's information, he discovered that the gang member was out on probation and called for backup.

Officers who then searched Thammavong's home found “numerous” signs of his gang affiliation, and a further search turned up a semi-automatic rifle and a semi-automatic handgun. Police also found tactical gear similar to police-issue equipment, and 38 illegal marijuana plants.

Thammavong was booked into the Fresno County Jail on several felony charges, including being a felon in possession of a firearm, and cultivation of marijuana. His mugshot, of course, has gone viral. 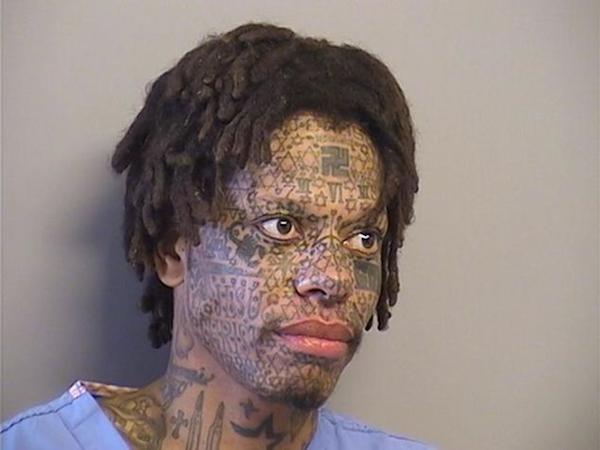 He has a face only a mother could love.

Michael Carter was nabbed in January 2016 after causing a ruckus at in fast food restaurant and later locking himself in a gas station bathroom — but it was his fully tattooed face and a bizarre mask and devilish red costume that raised eyebrows. His mugshot reveals a heavily tattooed face featuring a swastika and “Jesus Christ” scrawled across his cheek. A month later, he was arrested again after police got reports he was pointing a gun at drivers, which turned out to be a toy. In March 2016, Carter, 36, try to force his way into the Day Center for the Homeless. When an employee told Carter he wasn't allowed inside, he refused to leave, and was arrested a third time. 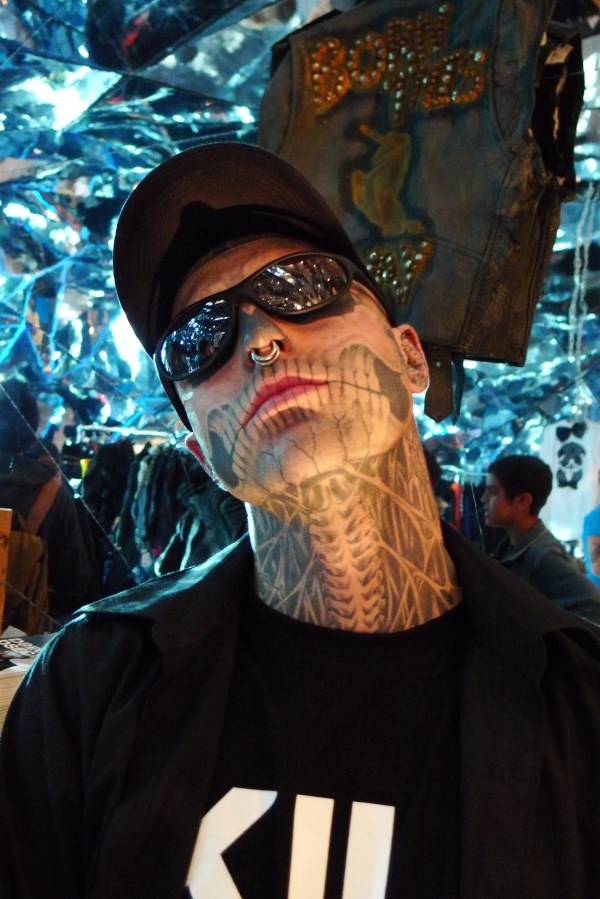 Rick "Zombie Boy" Genest shot to fame after displaying his macabre body art in Gaga's video for "Born This Way" in 2011.

Genest, whose entire head and torso are covered, was discovered by Nicola Formichetti, Gaga's stylist, who quite literally plucked him from obscurity. Before fame, he was living on the streets of Montreal, doing everything from window-cleaning to performing as a circus freak to pay for his next tattoo.

He currently works as a male model appearing on runways and in fashion magazines worldwide. 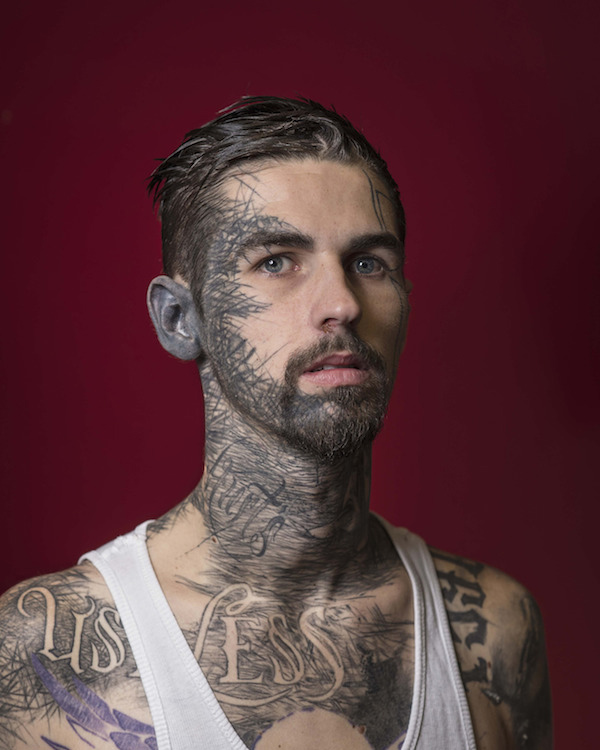 24-year-old Gino Dartnall, who started tattooing his face at age 18, was shot by UK photographer Mark Leaver for his for his photography project "Facial Tattoos." Leaver gets up close and personal with his colorful-faced subjects to strip away presumptions and show these men and women at their most intimate.