Canoe polo, also known as kayak polo, is one of the competitive disciplines of canoeing. Known simply as “polo” by its aficionados, the sport combines canoeing and ball handling skills with an exciting contact team game, where tactics and positional play are as important as the speed and fitness of the individual athletes.

The canoes are designed specifically for polo and are faster and lighter than typical kayaks, making them easier to maneuver. The paddles are very lightweight and designed with both pulling power and ball control in mind. 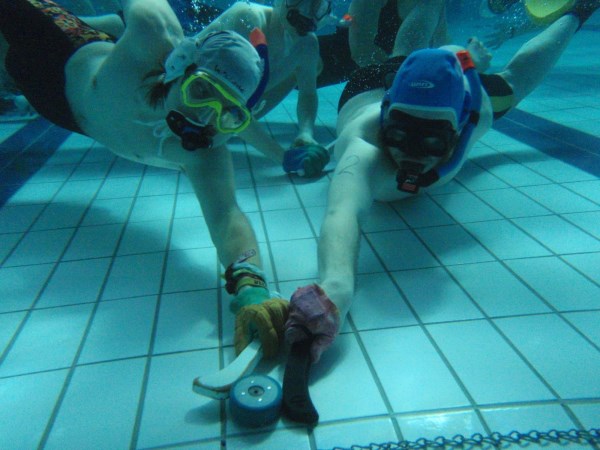 Not to be confused with underwater hockey, which is played in indoor swimming pools, underwater ice hockey is practiced on a 6-meter wide by 8-meter long rink under the icy surface of a frozen lake. After cutting a square hole in the thick ice, players wearing wetsuits and carrying hockey sticks jump into the water and try to guide a floating puck into their opponents' goal.

Underwater ice hockey players need to have excellent breath-holding abilities, considering they're not allowed to play with any breathing apparatus. Matches can get pretty physical, and players need to surface every 30 seconds for a breath of fresh air. Divers can get disoriented during a game fairly quickly. If one of them is too exhausted to reach the hole, or just can't find it, there are four additional divers equipped with oxygen tanks to supervise every match. Underwater ice hockey periods last 10 minutes, and players are allowed 10-minute breaks to warm up.

From flyboards to hoverboards, there are some crazy water rideables out there, but they pale in comparison to this wave-riding dirt bike built for DC Shoes and piloted by Australian stunt rider Robbie Maddison. Maddison, whose previous work includes stunt work during a chase sequence in Skyfall, took the modified bike out onto the waves of Tahiti to film the four-minute sequence below.

Not only is the coast of Teahupo'o, Tahiti considered one of the world's most dangerous surfing spots, it's also notorious for the heaviest reef breaking waves. 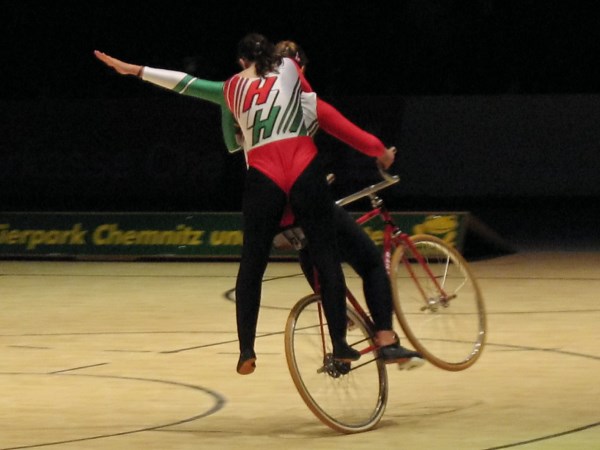 Artistic cycling was invented in the 1950s and is currently popular in Germany. This sport is comparable to ice skating and artistic gymnastics, except that performers ride bicycles during the entire event. Competitors (individuals or pairs) present a 5-minute program set to music and the jury awards marks for the quality of their performance.

The first official Artistic Cycling World Championships were held in 1956. 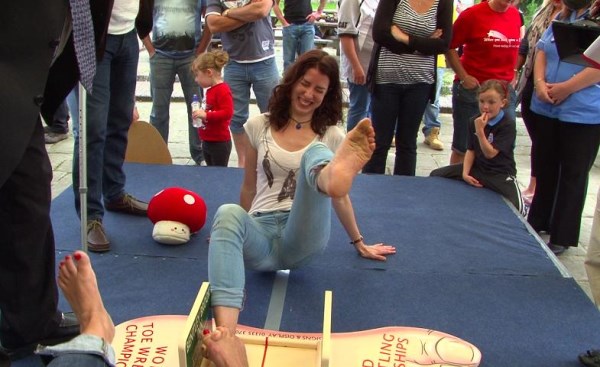 Take off your shoes and socks, folks—it's toe-wrestling time! Although you might not believe it, toe wrestling is a real sport complete with its own world championship games. And if the steely grip of five interlocked digits isn't enough to knock the competition's socks off, the names of the participants certainly will!

This quirky sport has its origins in the UK. It all started at the Royal Oak Inn, a pub in Wetton in the Peak District National Park. In 1976, a group of walkers at the Royal Oak decided it was time to invent a sport that Brits might actually be good at, and toe wrestling was born.

The sport is a lot like arm wrestling. Contestants put their feet on the “toedium," the umpire yells “toes away," and the match begins. To win, the rival's big toe must be forced to the ground two times over the course of up to three rounds. The first round is held with the right foot, the second with the left, and the third (if it's necessary) with the right again. 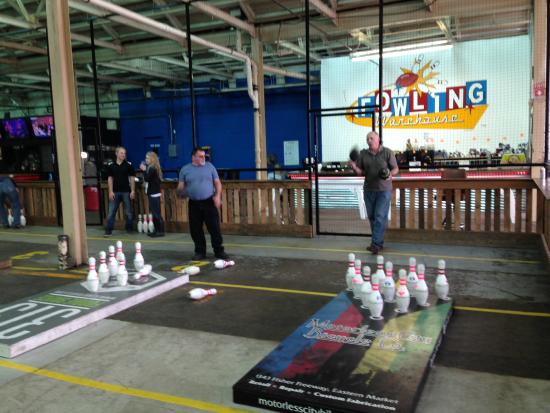 A Detroit man has come up with a new sport he hopes folks will enjoy. Chris Hutt owns the Fowling Warehouse, a 34,000-square-foot repurposed industrial site in Hamtramck devoted to the football/bowling hybrid sport. In the game, two players stand across from each other, 48 feet apart. Each has a football and a set of 10 bowling pins standing upright. The object of the game is to knock your opponent's pins down before he takes out yours. The game is not complicated, but it's certainly not easy. In the Fowling Warehouse's first six months of operation, only 29 strikes had been thrown over 100,000-plus games. 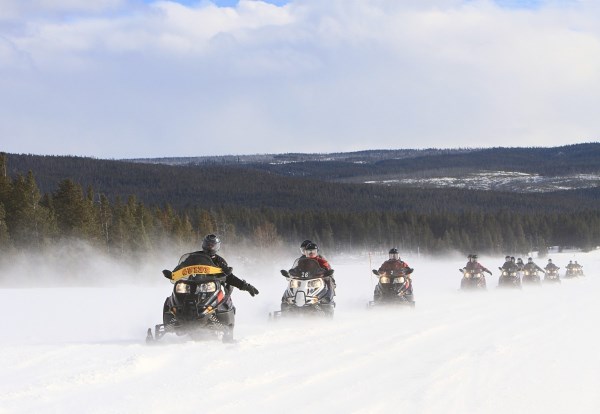 Bored? Attach a parachute to your snowmobile and drive it off a cliff. Problem solved! Wait, what?

Yes, you read that correctly. Stunt Freaks pioneered a new sport that will no doubt become very popular. These daredevils strapped a parachute to a snowmobile and ran it off the side of a 1.5 km Swedish cliff (that's almost a mile up). 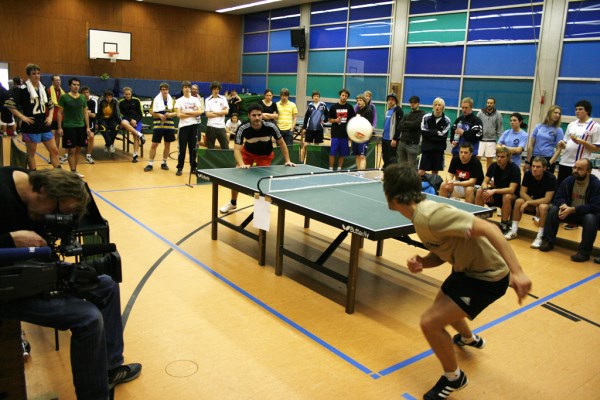 Headis, a hybrid of soccer and table tennis, is a sport played in Germany. Two people face off across a table, knocking a ball back and forth between them. The table used is very similar to that of one used in ping pong, but the comparisons end there. Players of headis are striking a 7-inch rubber ball with their heads.

The sport is only eight years old, but it already has the three things it needs to be legit—sick moves, elite players and weird nicknames for said elite players. "Headi Potter" is our personal favorite, followed closely by "Spiff." 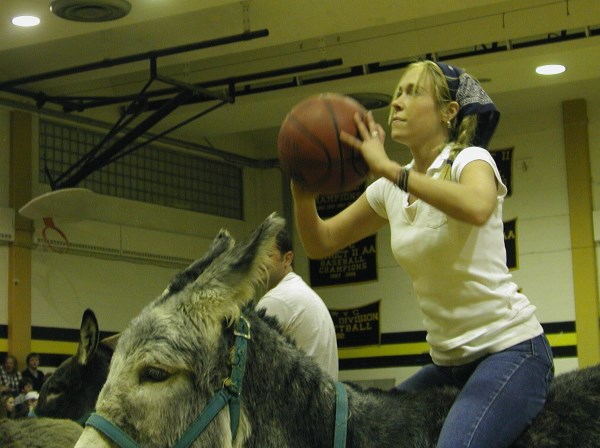 Invented during the 1930s as a cheap form of Depression-era entertainment, donkey basketball remains a popular sport in the Midwest.

Two four-player teams shoot hoops while riding on donkeys. The animals often just lay down, crushed by the players' weight. When that happens, competitors are allowed to dismount and drag the donkey to the hoop. Donkeys can carry up to 68kg, but many of the donkey basketball players weigh considerably more.

This unusual sport is played mostly in school gyms, by school staff and local celebrities. PETA has denounced donkey basketball as animal cruelty. Before the beginning of a donkey basketball match, an announcement is made saying the animals are treated humanely. However, protesters say the donkeys are starved, so they don't defecate during the match. They are often kicked, pulled by their tails and ears, and get stressed by the chaotic atmosphere.

Donkey basketball has been banned in Portland, Oregon, Indiana, Ohio, and Pennsylvania, but it's still thriving in Iowa. 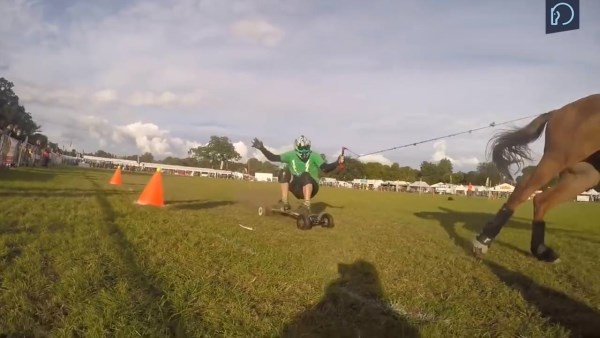 Adrenaline junkies have found a new way to get their fix. Horse boarding is an extreme sport where boarders on off-road skateboards are dragged by horses and reach speeds of over 35 mph.

Horse boarding was invented in 2008 by Daniel Fowler-Prime. He tied a rope between his board and a horse and decided it was a pleasurable experience. He was just messing around on the farm, and laughing with his friends, but soon realized this could be considered a sport. In 2011, he organized Britain's first Horse Boarding Championship.

According to Daniel, the sport is “accessible for people of all abilities, you only need a bit of space and a lot of guts.” That's easy for him to say—he's a professional stunt horse rider who has made appearances in films like Kingdom of Heaven and The Da Vinci Code. However, for regular people, holding on to a rope while maintaining your balance at 35 mph has to be pretty tough.