Most people have seen tandem (two-seater) bikes, penny farthing (old-timey) bikes, and even tall bikes (exactly what they sound like), but these crazy bike mods make those tried-and-true models look downright boring. 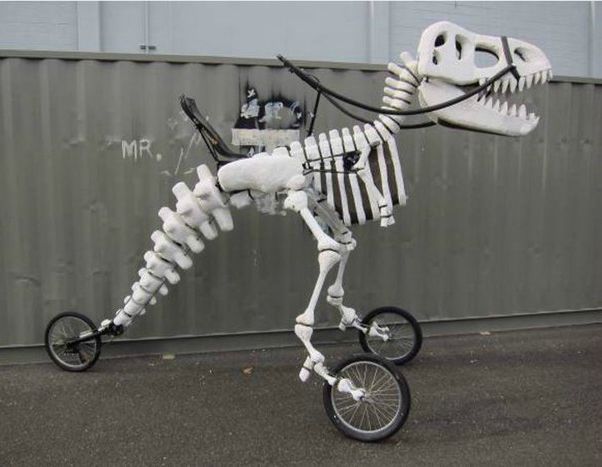 Who wants to wrangle a dinosaur without having to head to Jurassic Park? Check out this awesome T-Rex trike that was recently for sale on Craigslist. The rider can even make the old bag of bones open her mouth and turn her head. 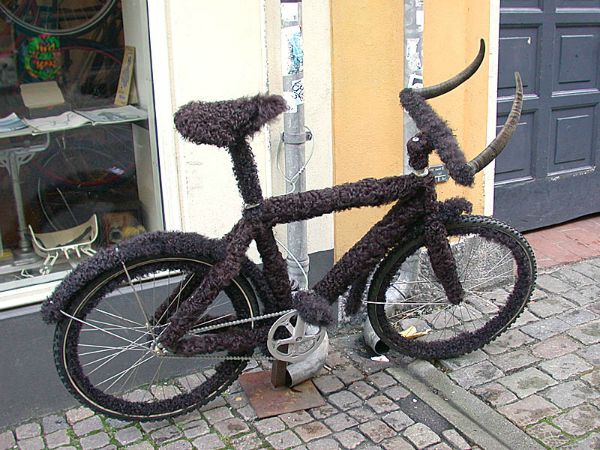 Whether you love the bison of the American West, or you just miss the shag carpeting of the '70s, we're pretty sure you'll love this bison bike spotted in Copenhagen. I sure hope they keep it out of the rain, or it might just start smelling like a real bison. 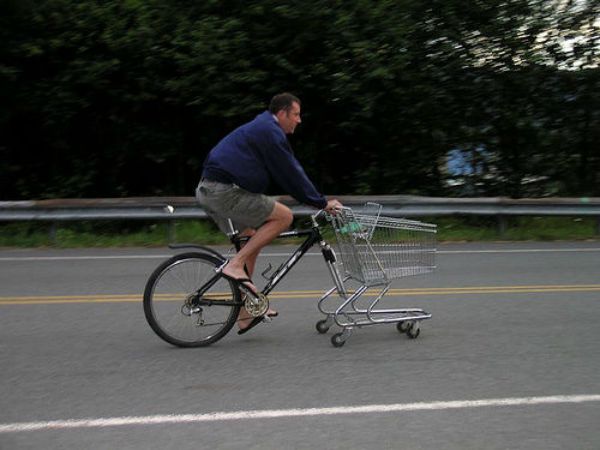 One of the problems with using a bike instead of a car is the limited storage space. It makes carrying groceries home a bit of a challenge. A Cart Bike like this one by Instructables user zieak, allows you to carry all you need in front you. Of course, acquiring a shopping cart without breaking the law might be a challenge, and it's only a matter of time before the cart starts rattling uncontrollably or pulling off to one direction. However, if you're handy enough to put one of these together, you're probably handy enough to source and fix a cart too. 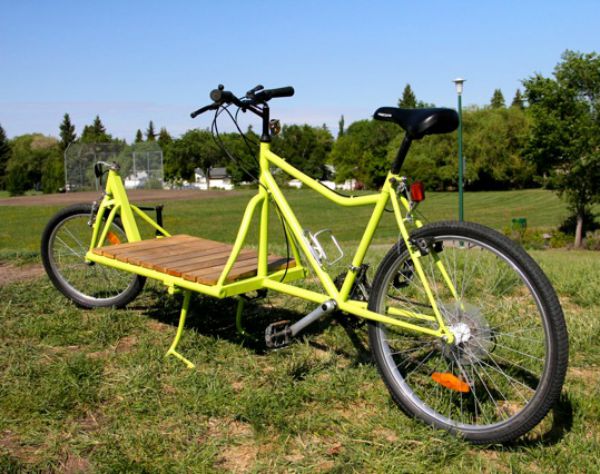 If you can't source a cart for a cart bike, or if you need something with more of a flatbed, you can always try a cargo bike. There are many cargo bikes online, but this wood-lined, three-wheeled design is a particularly attractive take on the concept. 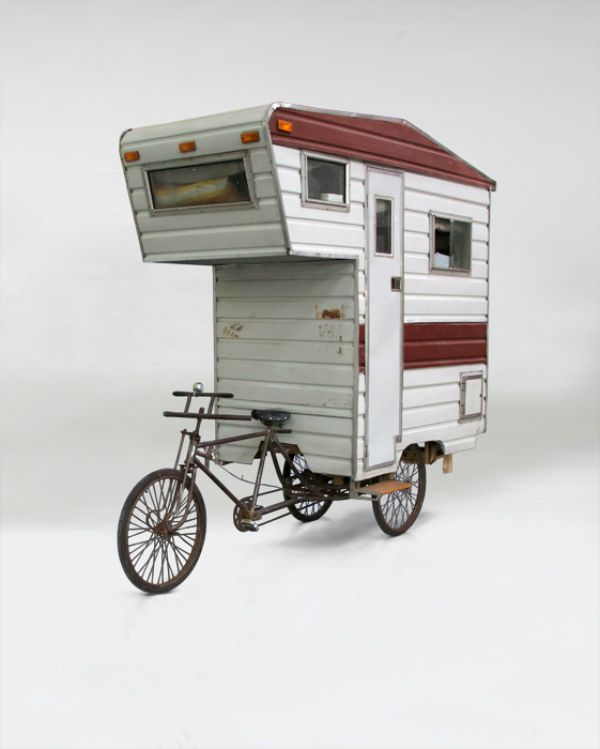 Plenty of people bike through the wilderness and camp out in tents. However, full-size camping trailers have been reserved for those using automobiles. Artist Kevin Cyr's camper bike finally gives cyclists the freedom to travel with a proper bed, kitchen, and entertainment center. 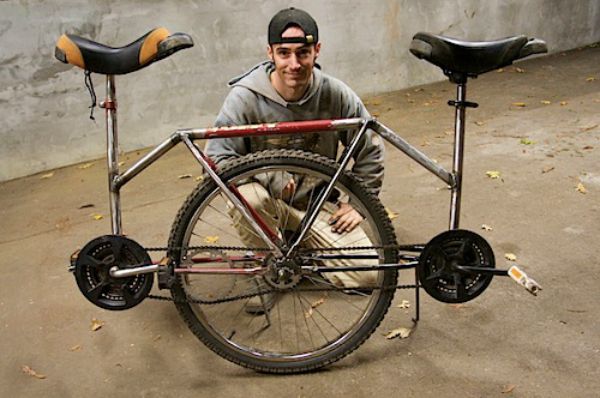 Riding a bicycle built for two might be romantic, but it is still a challenge. Just imagine what happens when you toss out one of the wheels and turn your bike into a unicycle built for two. Either you'll be incredibly in sync with one another, or you'll crash instantly. 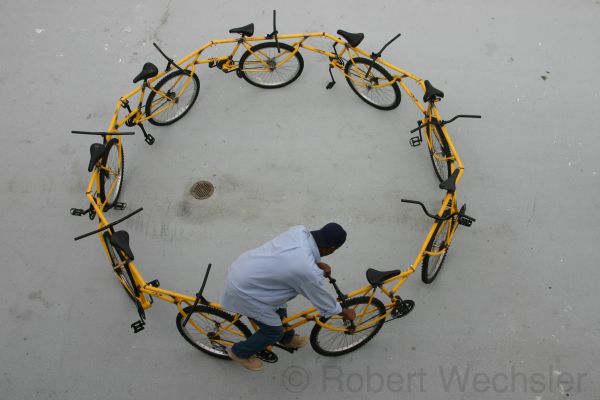 If a bicycle built for two isn't your thing, you might be surprised to learn that a bicycle built for nine can be quite sturdy. The bike is built in a circle and can't fall over. This clever piece by artist Robert Wechsler was built from salvaged bikes and can be dismantled and brought anywhere. 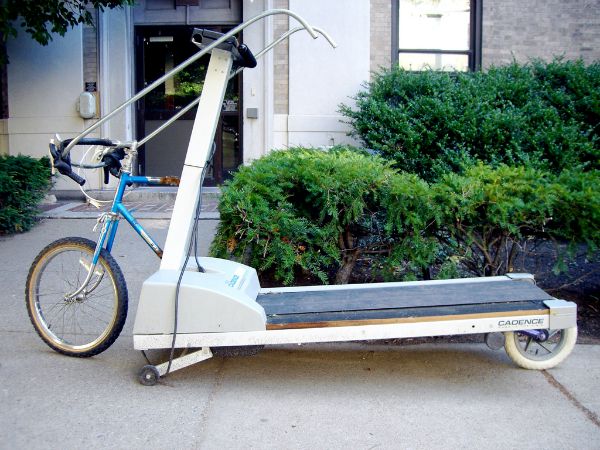 Prefer running over cycling, but still like the thrill of riding on wheels? The treadmill bike is for you! Finally, you can take a long walk through the park without ever getting dirt on your shoes. You can buy a treadmill bike that's professionally made and sold online, or you can convert a home treadmill into a bike like the one above. The bike's extra weight just gives you that much more of a workout. 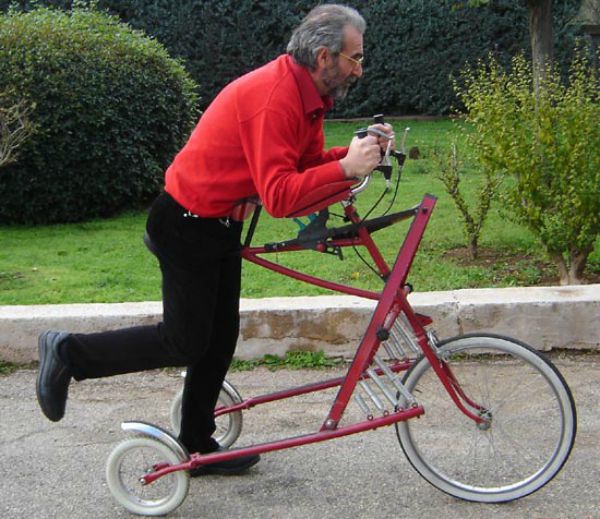 This crazy bike requires you to run to power it and then hop up, put your feet on the sides and roll along with the inertia you just created. As strange as it sounds, it still makes more sense than the treadmill bike. 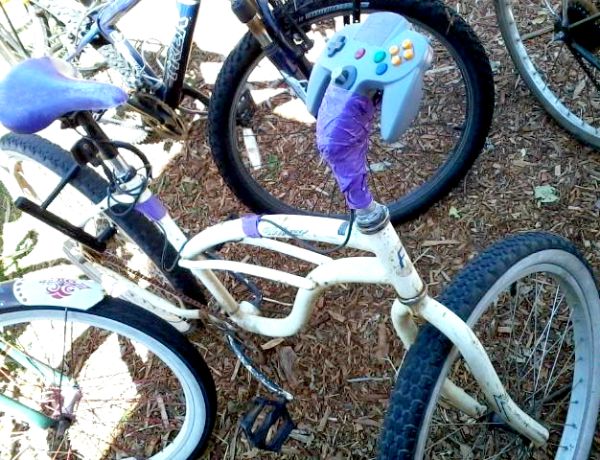 Looking for a way to get gamers outside? Try making a bike with a controller in place of the handlebars. Sure, the buttons won't do anything, but maybe just having something familiar in their hands will be enough to keep people off the console and in the sunshine. 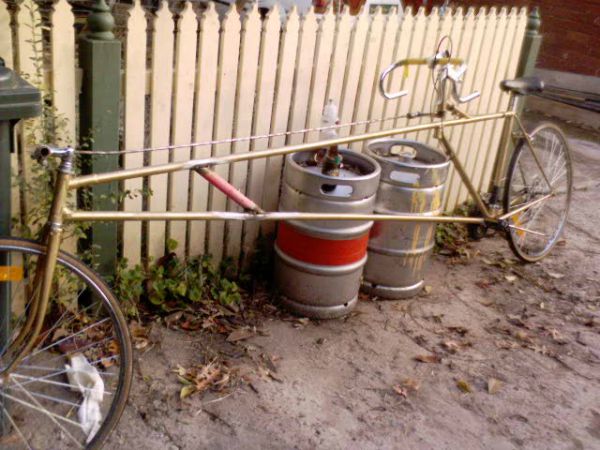 There's no real equivalent to a stretch limousine in the bike world, but the Rat Patrol's Schlooooong comes as close as you can get. This absurdly stretched out bike looks both fun and terrifying to ride. Unfortunately, some jerk stole the bike from its owners. If you ever see someone rolling around on it, be sure to yell, "hey, that schlooooong is stolen!" 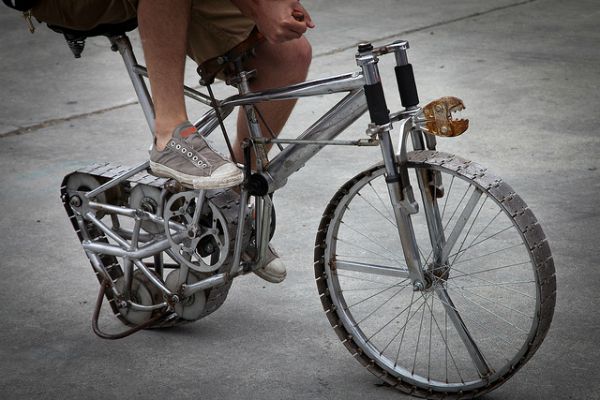 If you think tires are for wimps, don't count yourself out of cycling yet. This crazy mod combines a cycle with a tank. It comes with treads powered by pedaling and a confusing, two-handed steering mechanism. We don't know what this monstrosity is called, but we do know it was featured at the 2010 Tour de Fat bike festival in Seattle. 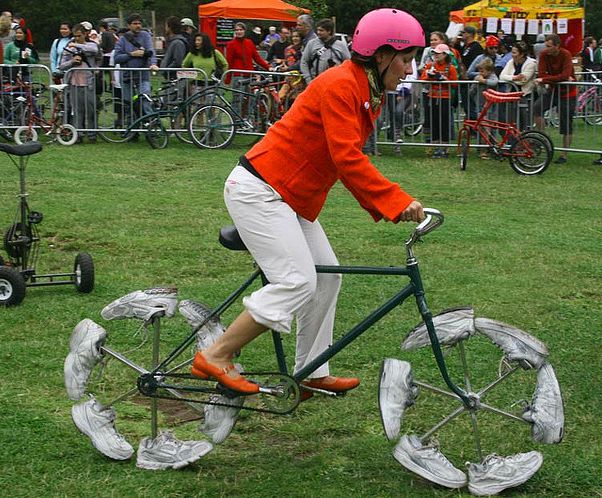 This crazy bike uses a series of shoes attached to sturdy spokes to simulate walking without ever putting your feet on the ground. This clever creation also appeared at a Tour de Fat bike festival in San Francisco in 2008. 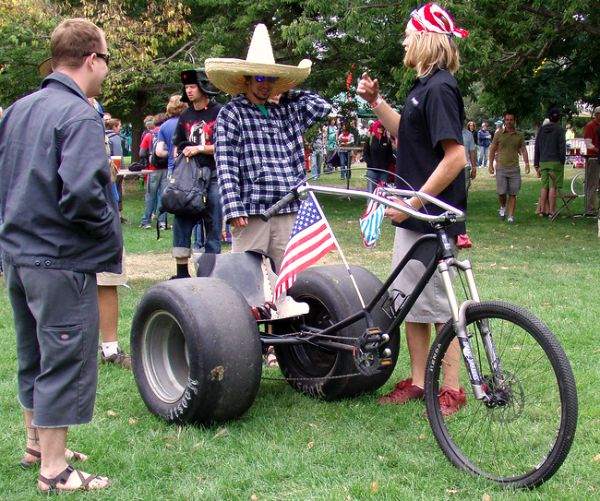 There are a lot of recumbent cycle designs these days, but many of them look, well, wimpy. This trike, spotted at the 2009 Tour de Fat bike festival in Denver, seems to be inspired by three-wheeled motorcycles that manage to look tough and laid-back at the same time. 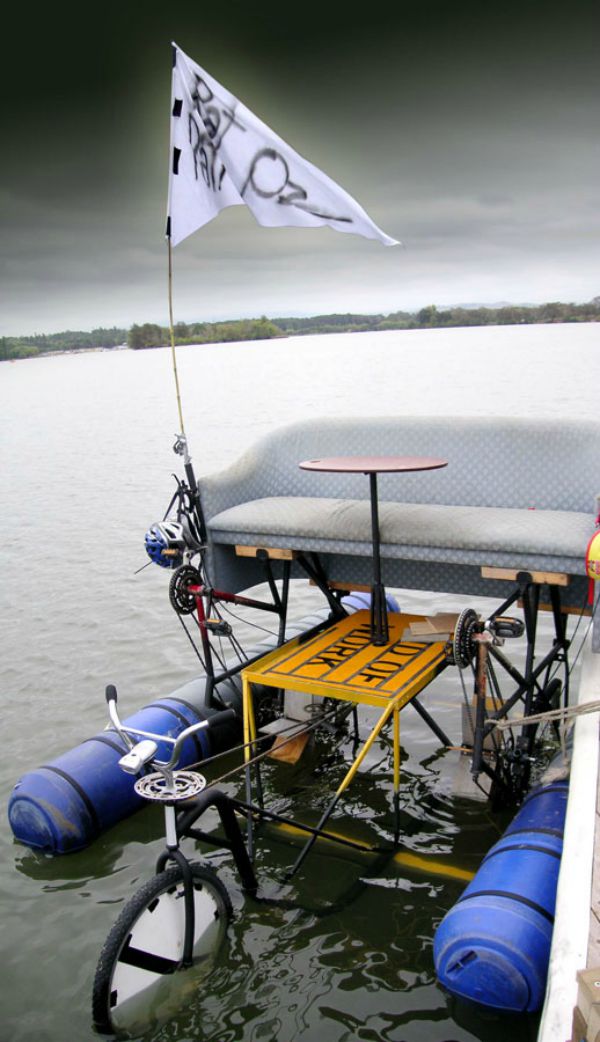 You probably don't want to ride your bike into a lake, but if you're riding the comfy couch of the Mitzie, water is the only terrain it's equipped for. It might just be the coolest paddle boat ever created.