People usually go to museums to learn, appreciate beauty, and celebrate history, but these 10 museums are likely to cause goosebumps and vivid nightmares. They are all filled with items that could be props in the scariest horror movie, except that they are all real, not make believe. Before you visit any of these 10 worldwide locations, put your brave face on and think positive thoughts... 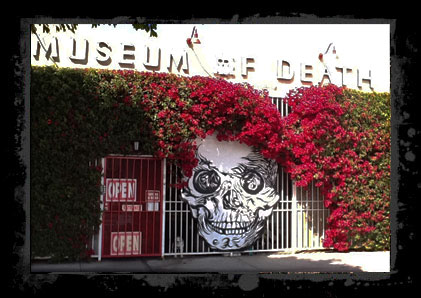 Housing the largest collection of artwork that was created by serial killers, the creepy Museum of Death in Los Angeles is sure to get under even a tough person's skin and into their subconscious. Photos of actual grisly crime scenes, and the autopsies that followed them, are not for the weak of stomach. Pictures of gruesome car accidents may make a person never want to get in an automobile again. There are rooms filled with funeral paraphernalia and embalming instruments, execution photos, exhibits graphically highlighting various murder cases, and a room strictly centering on death by suicide. Still not frightened after seeing all of this? Then try watching the videos that they have on display featuring people actually dying, or see the actual guillotined head of the Blue Beard of Paris. 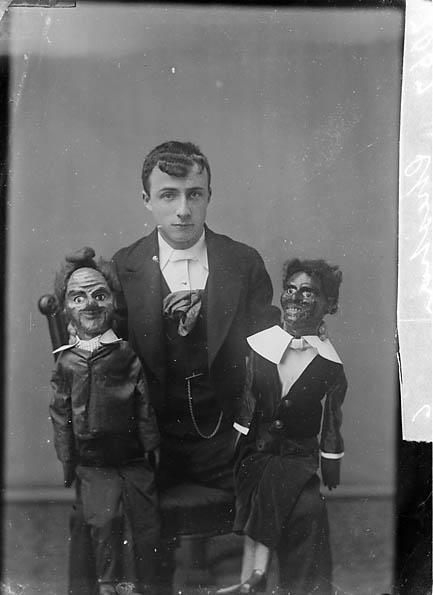 Ventriloquist dummies may seem kitsch and antiquated, taking us back to the days of old vaudeville acts and carnivals, but take a closer look- they are extremely frightening. The fact that they appear to take on a life and personality of their own is obviously a well-practiced trick, but there is an eeriness about these mini-humans. They tell jokes, roll their eyes, and appear to have their own minds. Suspend your disbelief and they could be capable of evil intent.

If one dummy is scary, imagine a whole collection of them- over 700 to be exact, all sitting in chairs and staring at you with vacant eyes. The Vent Haven Ventriloquist Museum, located in Kentucky, is the world's only museum that focuses on Ventriloquism. Here you will find row upon row of carved wooden dummies, their features prominent and well etched in order to be visible from the back row of a theatre. Their unrelenting eyes will follow you throughout the museum, as if trying to hypnotize you into taking on the role of their master. Stay calm and try not to run screaming.

3Museum of the Mummies- Guanajuato, Mexico 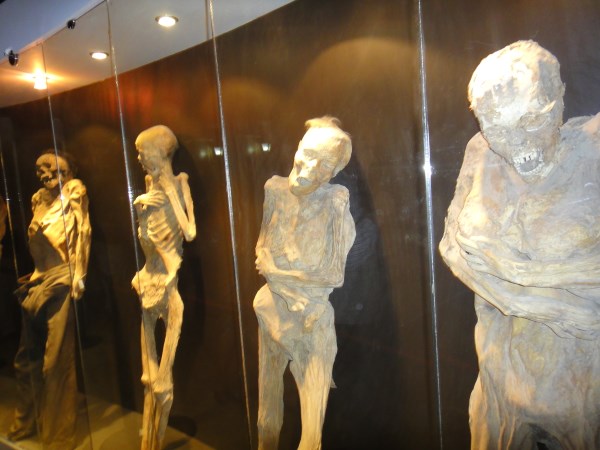 An extremely strange and haunting museum can be found in the town of Guanajuanto, Mexico. 111 bodies of mummified men, women, and children are on display, many with gaping mouths shaped in eternal screams from having been buried alive. These bodies had originally been put to rest during a cholera outbreak in the region in 1833. They were gradually dug up from their final resting places between 1865 and 1958 because their surviving relatives were unable or unwilling to pay taxes to keep them interred. The Museum of the Mummies evolved because tourists would pay cemetery workers a few pesos to view the preserved bodies, which were kept in a building at the graveyard. While viewing this macabre collection you can see the smallest mummy in the world, a fetus of a pregnant woman who fell victim to the cholera plague. Other mummies are chillingly wearing the exact clothes that they were buried in, while some are naked or merely wearing shoes with socks. The morbidity of seeing this life after death collection may work itself into your worst dreams. 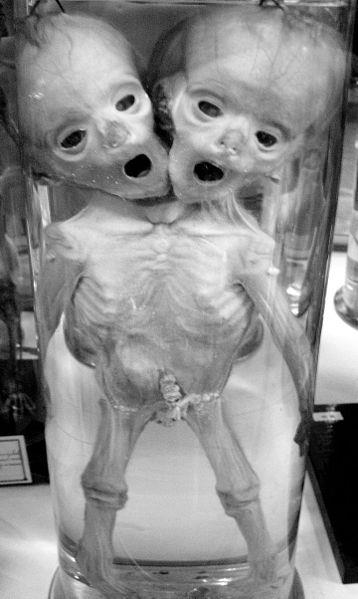 An extremely odd and creepy museum found in Paris is filled with real-life examples of medical abnormalities. The Musee Dupuytren was opened in 1835 by a celebrated Parisian anatomist and surgeon who collected diseased and malformed fetuses, skeletons, and human organs. This ghastly collection, which contains 6,000 items, includes liquid filled jars containing deformed human body parts, conjoined twins, and babies that were born with exposed internal organs. There are wax models of human heads with bizarre cysts, harelips, and frighteningly indefinable birth defects. Of course, there are more glass jars filled with floating brains of aphasic patients, nicely preserved in alcohol. This museum, both shocking and disturbing, will certainly affect even the most callous visitor. 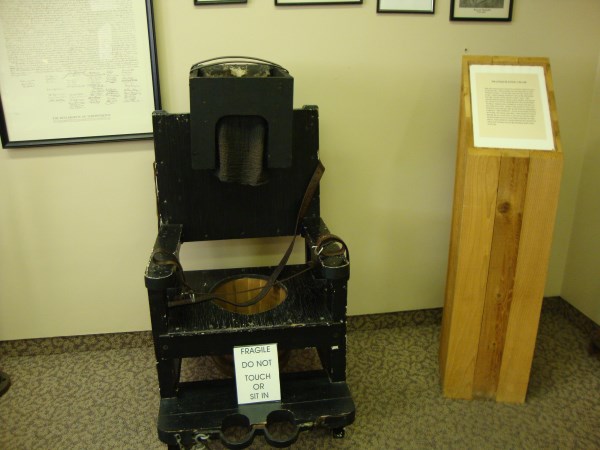 A feeling of danger and caution is activated upon entering the strange Glore Psychiatric Museum. The museum was opened in 1968 in a mental hospital which had originally been given the name "State Lunatic Asylum #2" back in 1874. A gloom permeates the hallways here. Perhaps it is the long ago screams from those people locked inside these very walls who were subjected to outlandish, often painful treatments to attempt to drive the "crazy" out of them. Imagine being imprisoned in a giant hamster wheel, "The Hollow Wheel," which kept 18th century patients moving for up to 48 hours straight in order to tire them out. Other patients were confined to the "tranquilizer chair" where they would be cut and bled for up to six months at a time under a doctor's belief that mental disorders were caused by too much blood to the brain. Still others were dunked randomly into buckets of icy water to shock their systems.

All of this and much, much more can be viewed with a visit to this terrifying museum. Feel the creepiness set in while viewing barbaric psychiatry techniques, tools, equipment, and 3-dimensional displays recreating this madness with smiling faced mannequins. See scary artwork that was created by actual inmates, and view an elaborate display of items removed from one mental patient's stomach: 453 nails, 105 hair pins, 115 safety pins, and assorted nails, screws, buttons, hooks, tacks, and needles. Know that however difficult life seems at times, things could be so much worse. 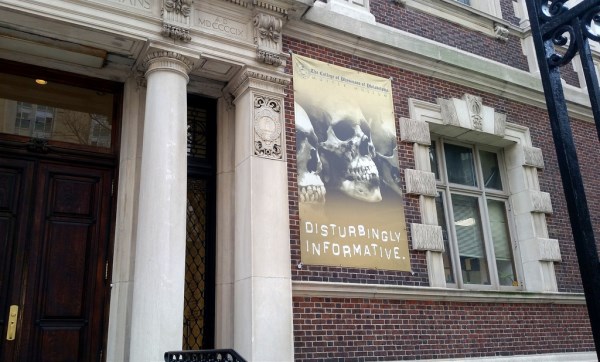 The Mutter Museum, a collection housing pathological specimens and medical anomalies, originally opened its doors to panicked and squirming visitors in 1858. Displaying actual brains of murderers and epileptics, a wall of skulls denoting how each of its owners died, a plaster cast of the infamous Siamese twins Chang and Eng, including the actual attached liver that the twins shared, and a skeleton belonging to a 7'6" giant man, this destination will surely get under most people's skin. Like the Musee Dupuytren in Paris, there are jars filled with floating creatures that are supposed to be human but look more alien, alongside photos of victims of the most unusual and unpleasant diseases and deformities. Then, try not to become queasy when you view the nine-foot-long human colon which was packed with over 40 pounds of fecal matter when it was removed from its owner, a sideshow actor who performed under the name The Great Balloon. The "ick factor" definitely rules the Mutter Museum.

Over 400 human skulls oversee the Italian Museum of Anthropology, created in 1898 by criminal physiognomist Cesare Lombroso. Lombroso was obsessed with the idea that deviant behavior and criminal tendencies went hand in hand with the shape and size of one's skull. He collected and dissected them, using skulls of soldiers, civilians, criminals, and madmen.

His collection also contains full-size skeletons, brains, images of dissections, antique instruments, and weapons that were used in actual crimes. Fear hangs in the air here. If you are not convinced you can ask Dr. Lombroso himself. His head is on display here, perfectly preserved in its own glass chamber. 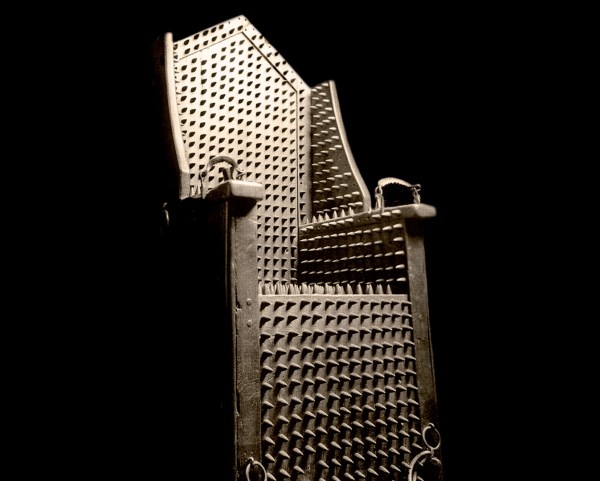 Are you curious about finding out why the Middle Ages are also called the Dark Ages? Ready to explore the sadistic side of humanity and see how truly brutal people can be under the guise of "justice" or punishment? Visit the Medieval Torture Museum in San Gimignaro, Italy and explore this collection of over 100 horrifying, pain-inflicting devices of pure sadism.

Located in the dungeon of the 13th-century Devil's Tower, you can almost hear the tortured moans of ancient souls as you wind through narrow corridors and gaze upon a once working guillotine, a fiendish rack used to stretch and pull victims apart, a savage "Spanish Spider" used to tear an adulterous wife's breasts from her body, and a "heretic's fork" made with razor sharpened spikes that were placed under the chin of a victim to keep him from falling asleep. See the truly terrifying Maiden of Nuremberg, a coffin-like devise with a swinging door lined with barbarous blades that would impale a victim inside by ruthlessly opening and closing that very door. This museum not only shows the true darkness of the Dark Ages, but also explores the bottomless pit of blackness in some human souls. 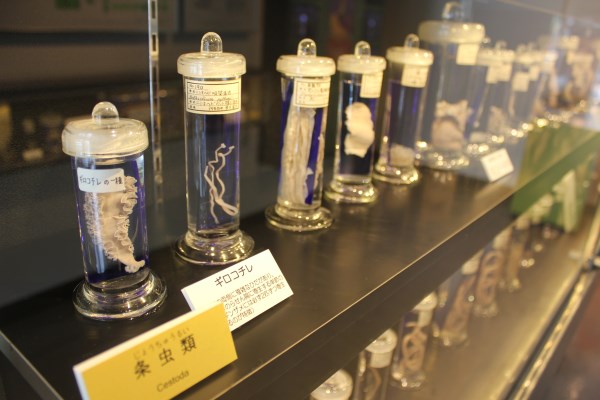 Fear is a fickle entity. While torture devices and skeletons are sure to frighten most people, sometimes the scariest things are right alongside us. A visit to the Parasitological Museum in Japan will make you squeamishly paranoid about everything around you. Parasites can invade from many innocuous sources- food, water, or merely walking around and breathing... There is no place to run and hide.

This museum, opened in 1953, is the only museum in the world dedicated to the nasty parasite. With over 45,000 items in its collection, it displays about 300 of them at a time. Look at glass jars full of the most evil-looking bugs, worms, and creepy crawlers, and know that if you are in the wrong place at the wrong time they could invade your body, too. View a real 8.8 meter-long tapeworm that was removed from a living human. See preserved animals whose bodies were ravaged by parasitic invasion, such as a turtle whose tongue was replaced by a parasite. Look at a photo of the body of a man whose scrotum was so enlarged by parasitic invasion that it hung down to nearly his ankles and was as wide as his torso. There are some images that you can never un-see.

10The Catacombs of the Capuchins- Palermo, Italy 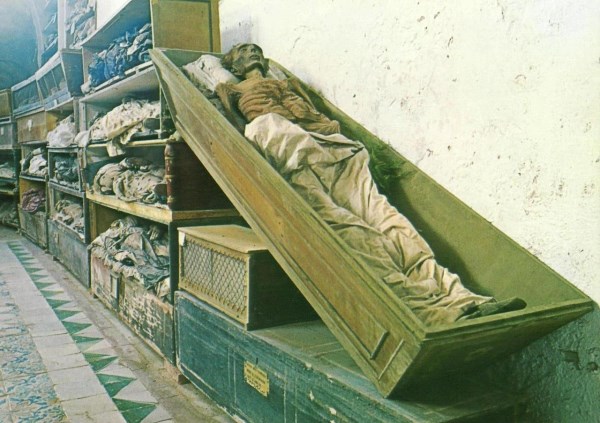 One of the most morbid and eerie burial sites can be found in Palermo, Italy beneath a monastery's original 16th century cemetery. The Catacombs of the Capuchins are essentially a collection of more than 8,000 mummified bodies of people who died between the 17th and 19th centuries. The bodies are on display, lining the walls in underground maze-like chambers, silently perched in a creepy tribute to the lives that they once lived so many centuries ago. Dusty and grey, they are dressed in the finest clothes possessed in their lifetimes. Many left instructions in their wills to have those clothes changed at certain times, which is quite a frightening idea in itself. These mummies hang with gaping mouths and empty eye sockets that seem to taunt the visitors of these dimly lit catacombs. Divided in death by class and status, as they likely were in life, men are held separately from women and children, while priests, monks, professors, and even virgins have their own sections. The hair on your arms will stand alert as you weave you way through this formidable tomb.