Here in Oddee we do not support the views and causes seen in this article, but we do support the geekiness of the posters. 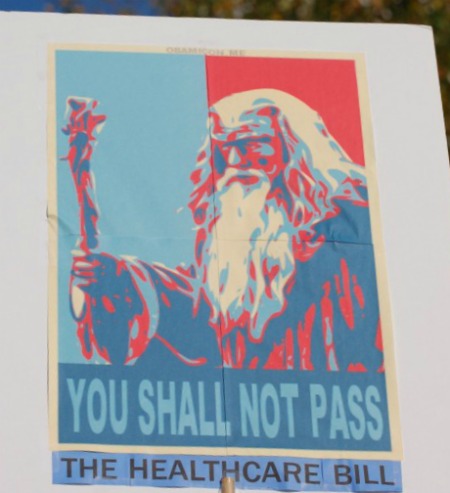 “You Shall Not Pass The Healthcare Bill” poster seen at a Tea Party protest, photographed by Erin M. 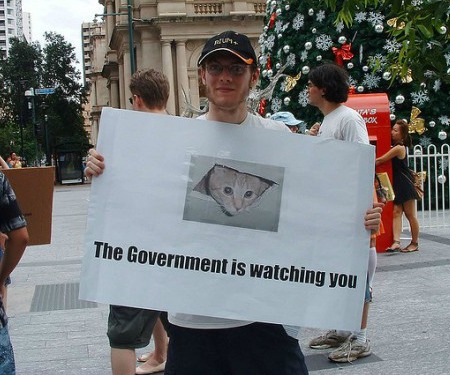 If you're going to protest censorship of the internet, you may as well do so in the language of the internet. That's why it makes perfect sense that Mike Ando and his friends fought a proposed Australian internet censorship bill by warning passersby that if the bill passed, the government, like Ceiling Cat, will always be watching. 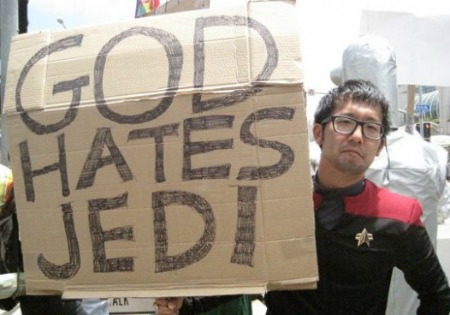 This Trekkie was at the Comic-Con protest of Westboro Baptist's attitudes. 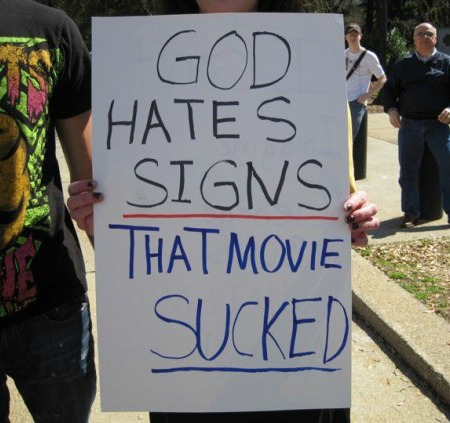 The Church of the Flying Spaghetti Monster members also did a great job at showing how ridiculous they think the Westboro Church is at one of the group's protests at USC. I seriously doubt that God hates America or dead soldiers, but given that everyone else in the world hated Signs, I doubt that He is a fan of the movie. 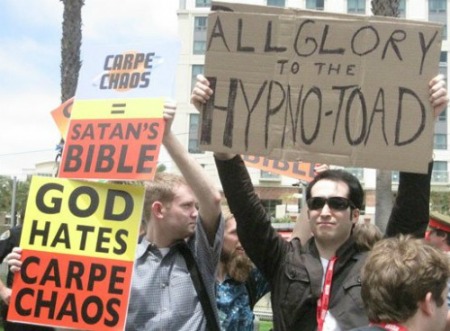 Sometimes the best thing you can do with a silly protest sign is to use it to show just how preposterous other protesters are. That technique was particularly productive at the Westboro Baptist Church's protest outside the 2010 Comic-Con. 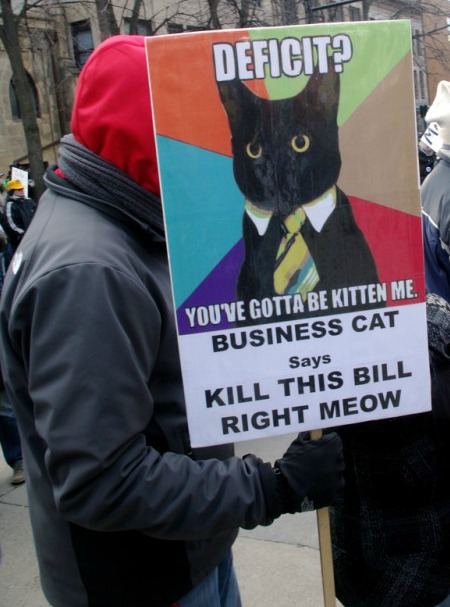 Geek posters, especially those featuring memes, were particularly popular at the Madison, Wisconsin protests against Governor Walker. Perhaps none of them were quite so pun-ny as this Business Cat sign, photographed by Jessie Reeder, where the famed kitten asks you to “Kill this bill right meow.” 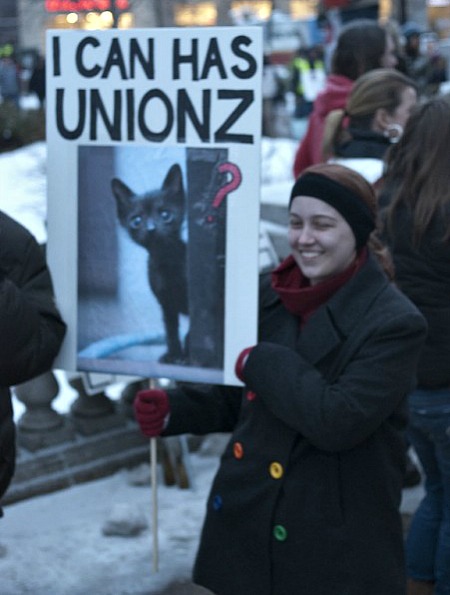 This LOL Cat poster, pictured by Flickr user d76, was even more direct asking, “I can has unionz?” 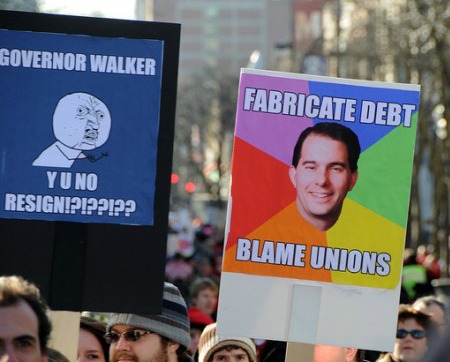 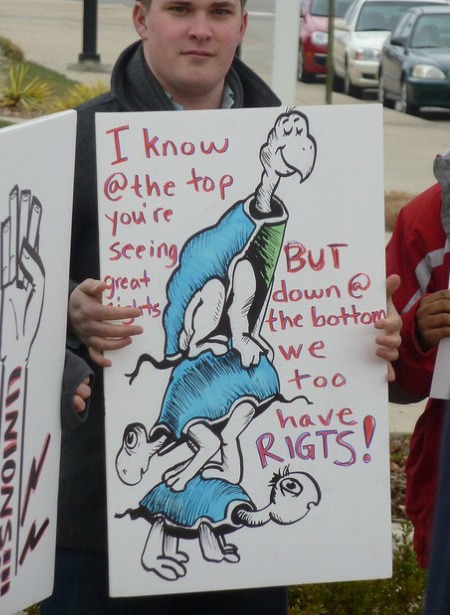 Not all of the geeky posters at the Madison protest were meme-related though. This sign, photographed by Jonathan Dresner, critiques the Governor in the immortal voice and style of Doctor Seuss. 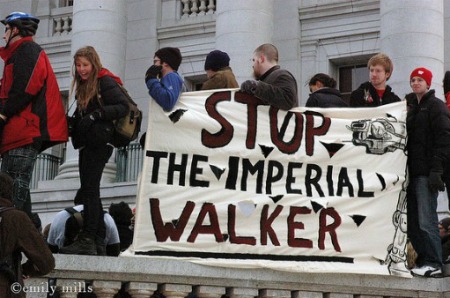 Given the Governor's name, there were also quite a few Star Wars puns during the protests, referencing the Imperial Walkers from the movies. This sign, photographed by Emily Mills, was one of many showing images of AT-ATs. 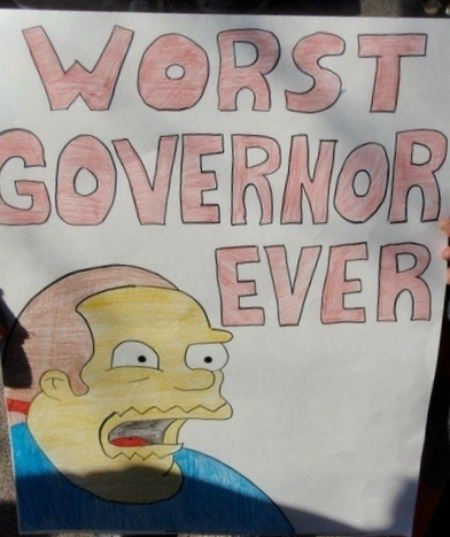 Even Comic Book Guy from The Simpsons got in on the act, rating Walker as the “Worst Governor Ever,” in this poster spotted by Stephanie Skiba. 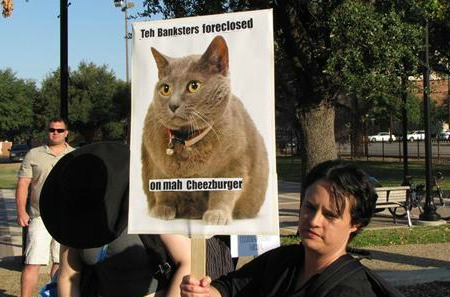 Occupy Wall Street also resulted in quite a few geektastic posters, the best of which was probably this LOL Cat sign claiming “Teh Banksters Foreclosed on Mah Cheezburger.” 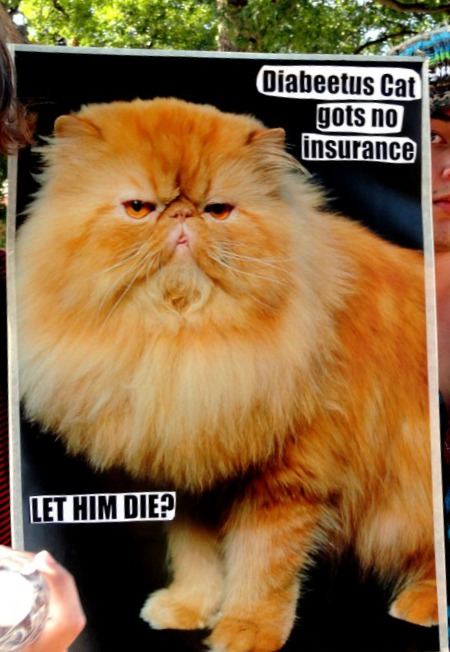 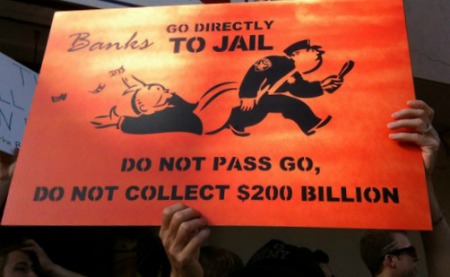 For those that adore board games, this Monopoly-based sign, spotted by Amy Sloan at Occupy San Francisco, puts things in terms even children can understand. 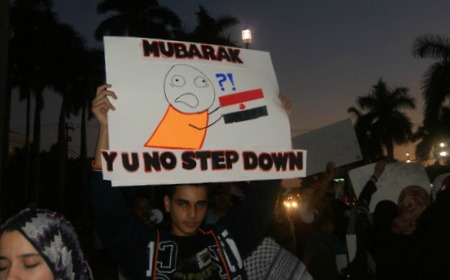 While the posters from Arab Spring protestors tended to be much more serious – they were, after all, risking their own safety to stand against their government – there still were occasional spots of levity. Take, for example, this “Y U No step down” poster used in the Egyptian protests. 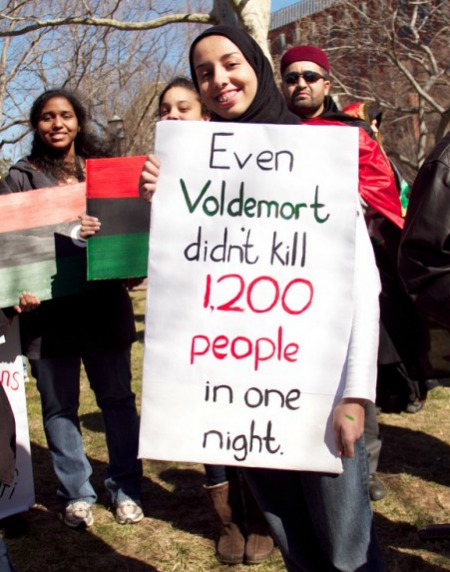 Over in the states, there were quite a few protests in support of those fighting their government's oppression and while most of the signs showing solidarity were fairly straight-laced, this young woman stood out from the crowd with her geeky poster pointing out that even Voldemort never killed as many people as Gaddafi had executed during one night of the rebellion. Image by Collin David Anderson. 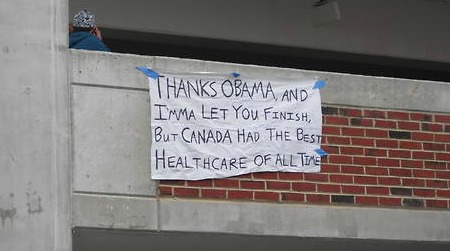 Of course, socialized healthcare is a delicate subject in America and it's no surprise that some fans of Kanye's outburst during the 2009 MTV VMA awards borrowed his classic line to push Obama for even stronger reform –like that of Canada. 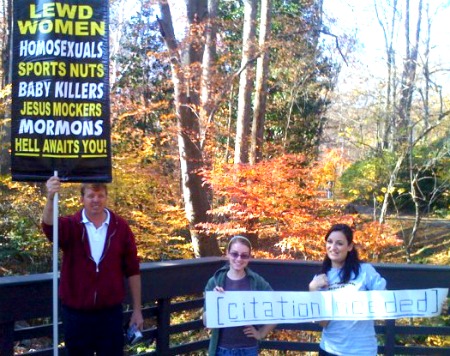 Many counter-protesters have taken on the hate-filled Westboro Baptist Church, but it's rare to see one so quickly and concisely evaporate the power of one of the church-members' signs as this “Citation Needed” poster.