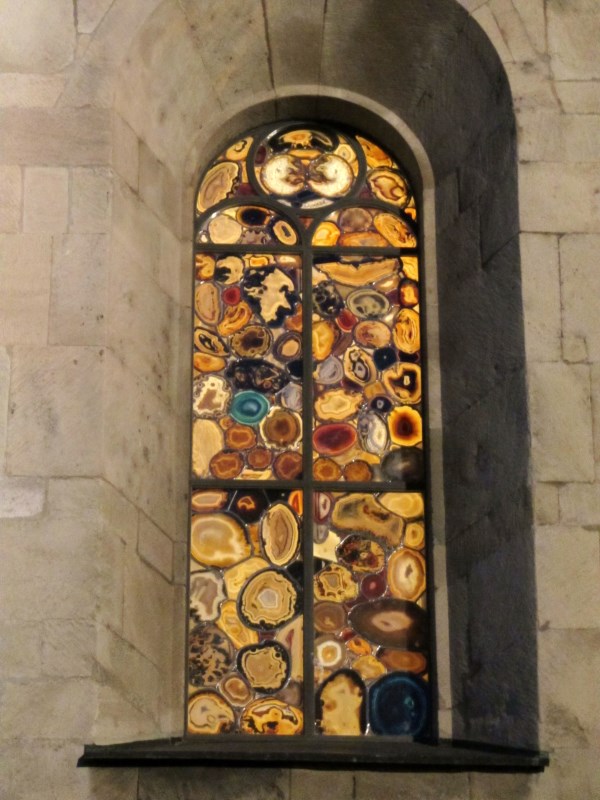 At first glance, these appear to be conventional stained-glass windows with a modern design, but the components of the windows are a bit unusual, they contain slices of agate. In 2009, the Grossmünster (one of the three major churches of Zürich) has been enriched with twelve exquisite windows by Sigmar Polke. He has given the western half of the church seven windows where the glass has been impregnated with thin slices of agate. Rockhounding purists might be dismayed by the fact that the geode slices have been “enhanced” by artificial coloration, but the effect is nonetheless quite striking.

2Glass Windows of the Netherlands Institute for Sound and Vision (Netherlands) 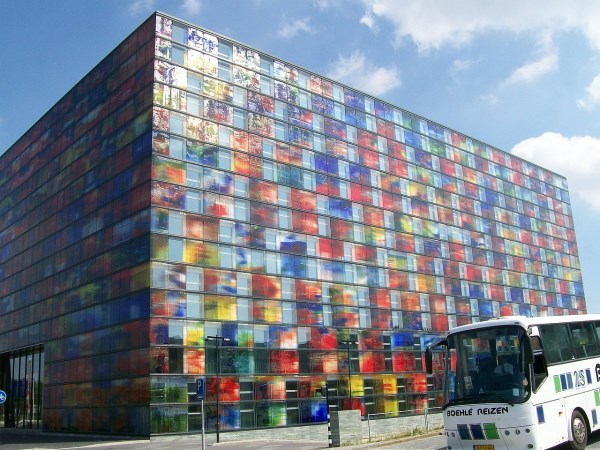 Neutelings Riedijk Architects (NRA) represent the generation of Dutch Architects that are finally beginning to usurp the dominance of Rem Koolhaas. NRA recently completed Netherlands Institute for Sound and Vision. The building was conceived as a perfect cube, half of which is buried beneath the ground. A cultural focus for the city of Hilversum, it houses broadcasting archives, offices and a museum. The exterior is a modern stained glass, conceived in collaboration with artist Jaap Drupsteen. Each panel of the cast glass skin is imprinted with famous images from Dutch Television. Interestingly, each image is only discernible from a certain angle, creating a merged and colourful effect. The interior of the building is in textural contrast, as it gives way to the exhibits. However, the stained glass casts a colourful glow where it permeates. One wonders if the effect is similar to that of the stained glass that we are more used to — that of the mediaeval church. 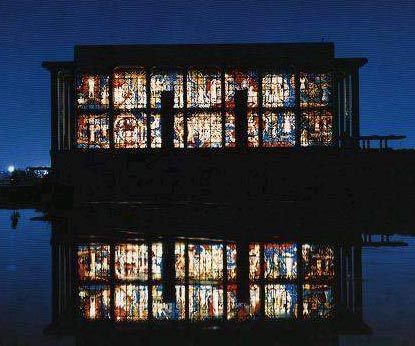 The largest stained glass window in the world, according to The Guiness Book of World Records, resides in Resurrection Cemetery, Justice, Illinois. Pickel Studio created this window using over 22,000 square feet of faceted glass. It contains 2,448 panels. Pickel Studio began working with the medium of faceted glass in the early 1960's. 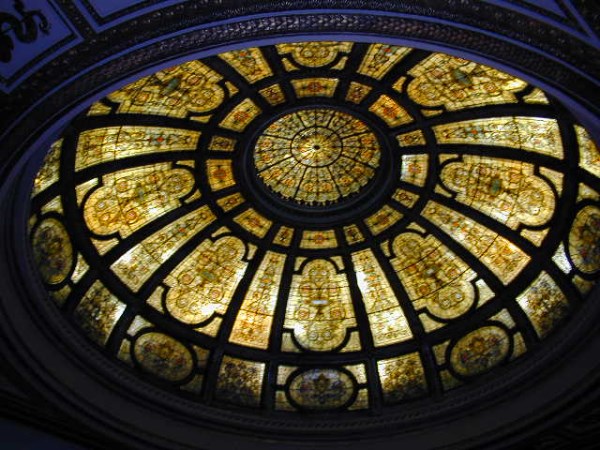 The Chicago Cultural Center - Preston Bradley Hall. This is the largest stained-glass domed ceiling in the world by Tiffany. 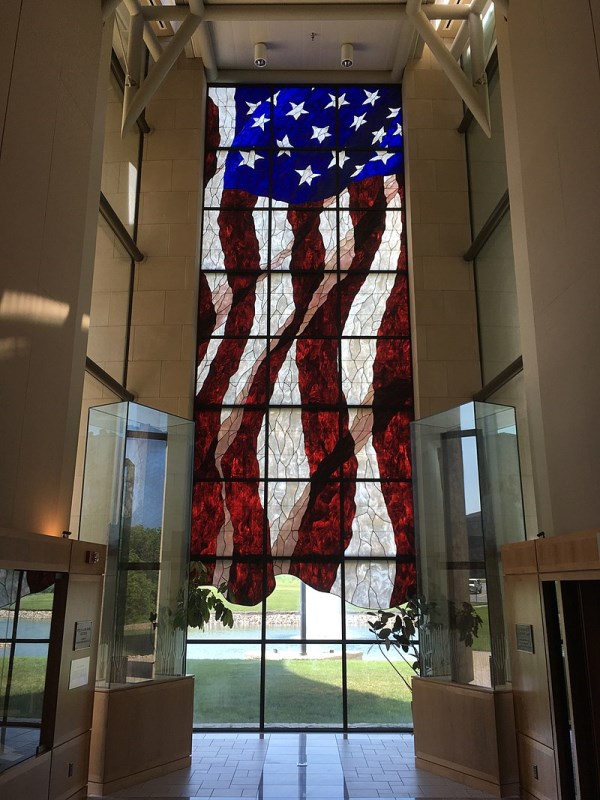 It had to be somewhere--the world's largest stained-glass flag--so it's here on the south wall of the Dole Institute of Politics on the west campus of the University of Kansas in Lawrence.

It's 40 feet high, it has 960 pieces and, it weighs one ton (not that it's likely to be moved anytime soon) and it costs $200,000. Flanking the flag are steel columns recovered from the World Trade Center. 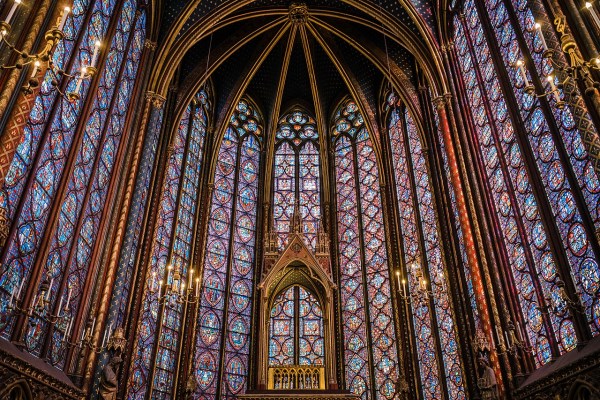 La Sainte-Chapelle is a Gothic chapel on the Île de la Cité in the heart of Paris, France. The most visually beautiful aspects of the chapel, considered the best of their type in the world, are its 6,458 square feet of stained glass windows of the upper chapel, surrounded by delicate painted stonework. The windows are in deep reds and blues and illustrate 1,130 figures from the Bible. The rose windows were added to the upper chapel in the 15th century. 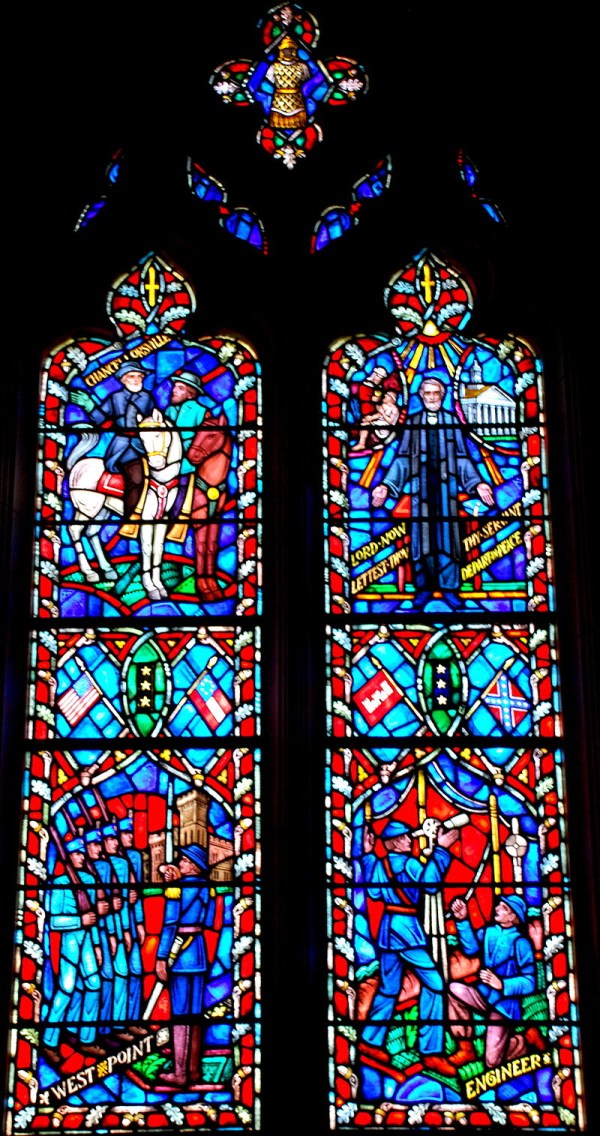 The Washington National Cathedral, is a cathedral of the Episcopal Church located in Washington, D.C.. Of neogothic design, it is the sixth largest cathedral in the world, the second largest in the United States. There are many works of art including over two hundred stained glass windows, the most familiar of which may be the Space Window, honoring man's landing on the Moon, which includes a fragment of lunar rock at its center donated by Apollo 11 Astronaut Michael Collins.

The cathedral is filled with memorials to persons or events of national significance: statues of Washington and Lincoln, state seals embedded in the mosaic floor of the narthex, state flags that hang along the nave, stained glass commemorating events like the Lewis and Clark expedition and the raising of the American flag at Iwo Jima. 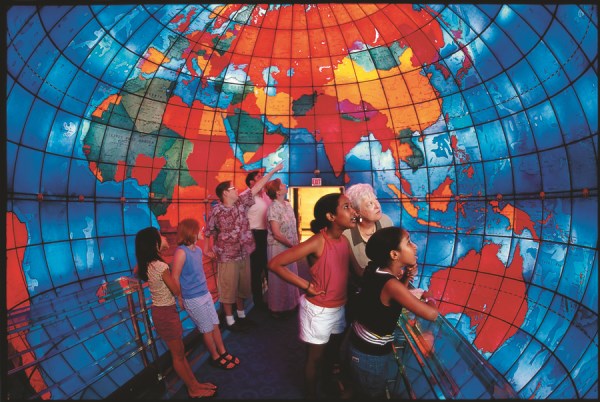 Located in the Christian Science Center in Boston, The Mapparium is a spherical stained glass room that depicts as a map of the world with political borders from 1935. The hard spherical surface of the globe reflects sound and produces striking acoustical effects. It forms a remarkable whispering gallery so that visitors standing at corresponding locations near opposite ends the bridge can speak to each other and be heard as if they were standing next to each other. The Mapparium was designed to allow the countries of the world to be viewed in accurate geographical relationship to each other. It is usually assumed that a globe solves this problem; but since it is viewed from the outside, different parts of the globe are at different distances from the eye and are thus distorted by perspective. 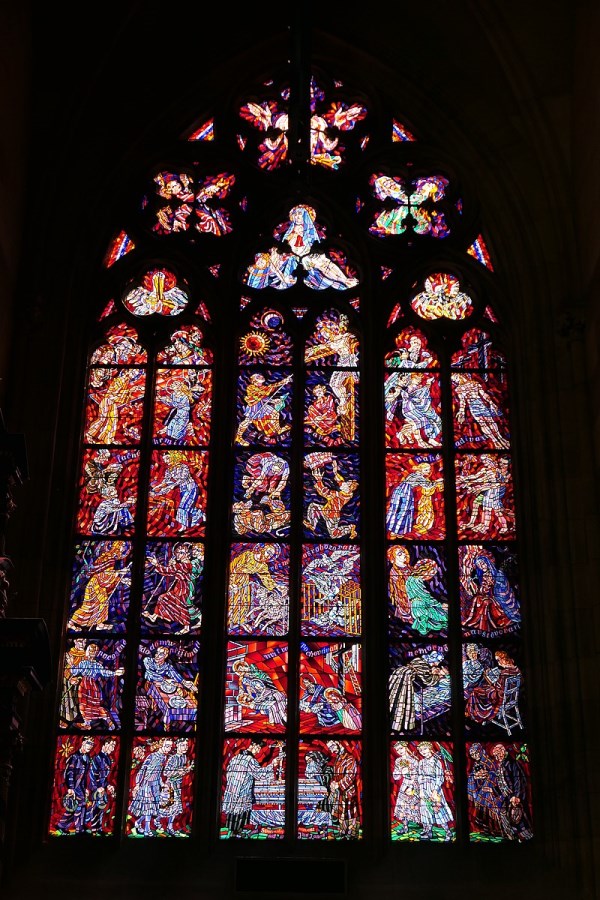 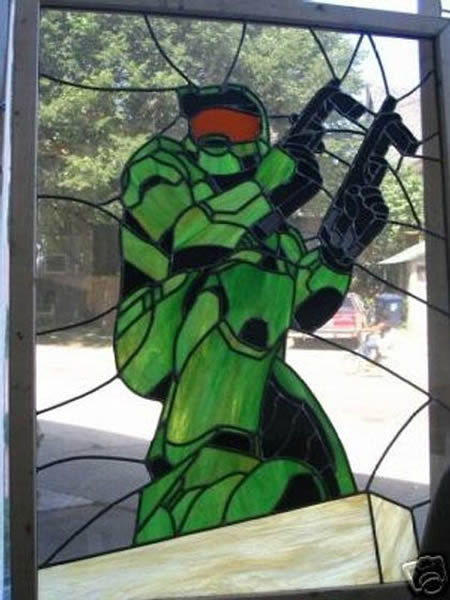 Ok, this is not that amazing, but definitely cool. Are you looking for that perfect piece of decoration for your living room? This weird stained glass Master Chief was listed on eBay. This sucker is hand made by Jacob's Stained Glass in Buffalo, NY, and according to them this picture does not do it justice. If you are a gamer who gets god and games confused this could be a perfect item to bid on.