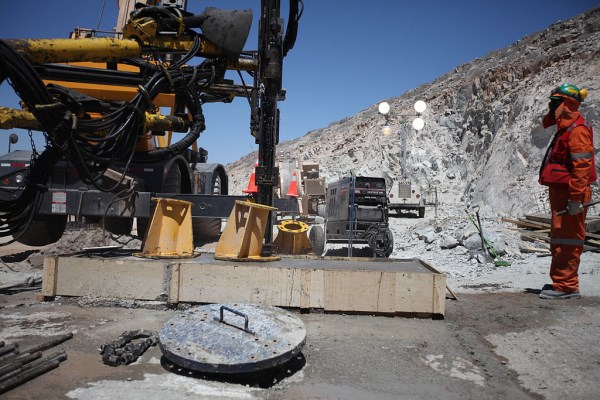 Chile is using a 40-ton drilling machine called Strata 950 to bore through 700 meters (2,300 feet) of rock and free the 33 trapped miners workers trapped in a collapsed copper mine.

Rescuers are using the Strata 950 to drill a 25-inch- diameter hole to the 33 trapped miners from the surface. The machine had to be disassembled into 42 trucks, which were posted out parts in shifts, since they couldn't fit them all together in the drilling area. 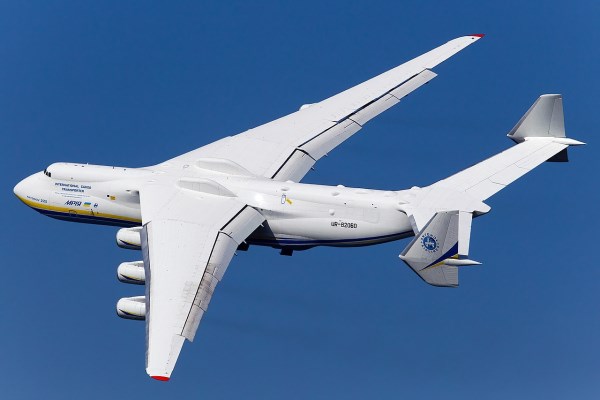 The Antonov An-225 Mriya is a strategic airlift cargo aircraft, designed by the Soviet Antonov Design Bureau. It is the world's heaviest fixed-wing aircraft. The design, built to transport the Buran orbiter, was an enlargement of the successful An-124 Ruslan. The An-225's name, Mriya (??i?) means "Dream" (Inspiration) in Ukrainian. The An-225 is commercially available for flying over-sized payloads due to the unique size of its cargo deck. One of the largest machines in the world, there's currently only one aircraft in operation. 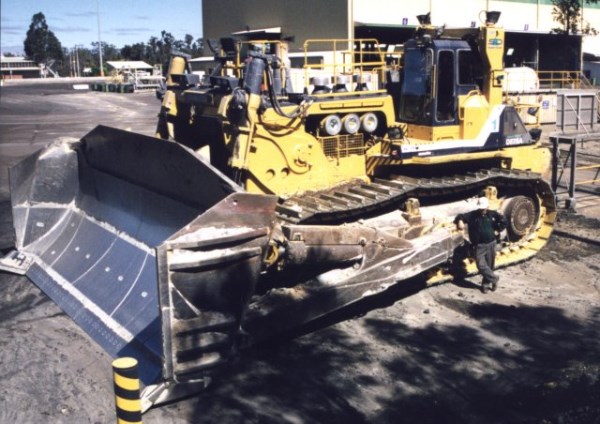 When it comes to bulldozing, bigger really is better. The bigger the dozer the more efficiently they work and the more aggregate they can shove. The World's biggest and most powerful (production) Bulldozer is the D575A-3SD built by Komatsu in Ishikawa, Japan. Standing 16 feet tall, 41 feet long and 24 feet wide the D575A-3SD is the king of power when it comes to shifting aggregate. When the need arises to clear away large amounts of rubble, rock or earth then the D575A-3SD is the machine of choice. 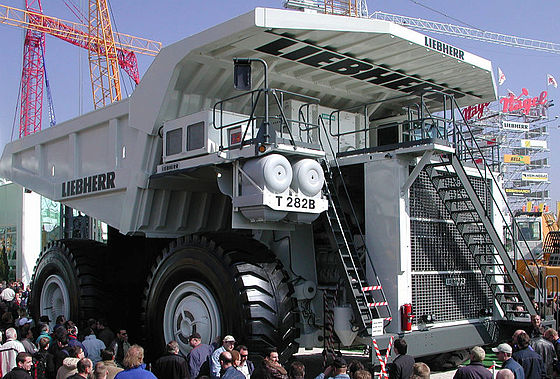 This monster machine Liebherr T 282B is a large earth-hauling dump truck designed in 2004 by a German manufacturer and became the largest earth-hauling truck in the world. It can carry about 360 tonnes (400 tons) at 64 km/h. Designer Francis Bartley says that such a truck costs US$3 million and that the worldwide market for these trucks doesn't exceed 75 units per year. He adds that this is an unconventional truck. It has a 2723-kilowatt diesel engine which powers two electric motors, making the T 282 B the biggest AC drive truck. If you like big toys, you'll certainly enjoy this. 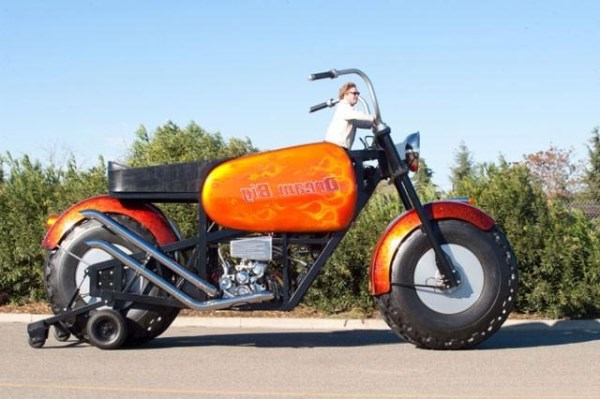 People who see Greg Dunham's motorcycle sometimes think they've suddenly shrunk. What they're actually looking at, however, is the world's biggest motorcycle, according to the Guinness Book of World Records. Dunham built the 15-foot high, 25-foot-long monster bike in over three years. It weighs about 6,500 pounds and cost $300,000. Dunham steers it from a cage below the handlebars.

The beauty shop owner said he created the monster bike because his friends said it couldn't be done and he wanted to prove it could. The reaction he gets from people who see it is icing on the cake. The Guinness Book of World Records describes the bike as the world's tallest rideable motorcycle.

This is the largest machine in the world with a length of 27 km, the Large Hadron Collider (LHC). It is the largest and highest-energy particle accelerator in the world intended to collide opposing particle beams. It was built by the European Organization for Nuclear Research (CERN) for testing various predictions of high-energy physics. It lies beneath the Franco-Swiss border near Geneva, Switzerland. It is funded by and built in collaboration with over 10,000 scientist and engineers from over 100 countries as well as hundreds of universities and laboratories. 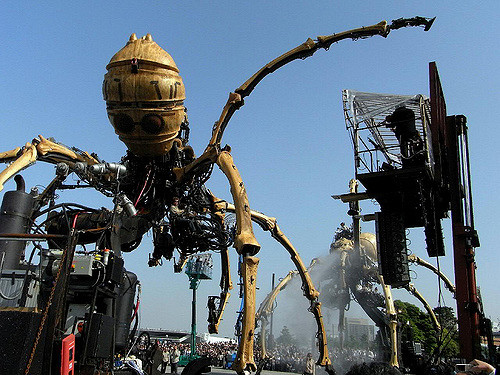 Giant mechanical spider, part of a piece of free theater by French company La Machine entitled “Les Mecaniques Servants,” walks along the waterfront in Liverpool, England, on September 5, 2008. The 37-ton spider which stands at 50 feet (15 meters) tall was in Liverpool as part of the city's European capital of culture celebrations. 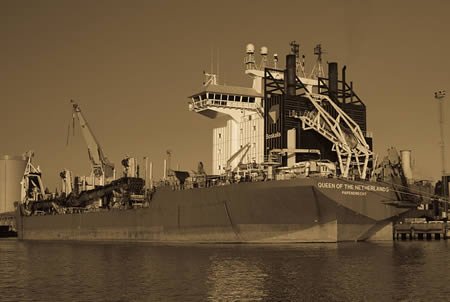 The Queen of the Netherlands is a trailing suction hopper dredging ship built in 1998. Because of its huge size – the drag head is 6 m or 20 ft wide and can dredge up to 115 m or 377 ft deep- this Dutch ship has been called "the world's largest floating vacuum cleaner." The ship's hopper is among the largest in the world.

This is the largest digging machine (or trencher or rotating shovel) in the world. It was built by Krupp and is shown here crossing a road in Germany on the way to its destination, an open air coal mine. Although at the mine the treads are unnecessary, it was cheaper to make the machine self-propelled than to try and move it with conventional hauling equipment. The machine is 95 meters high and 215 meters long (almost 2.5 football fields in length). Weight is 45,500 tons (that's equivalent to a bumper to bumper line of jeeps 80 miles long). It took 5 years to design and manufacture at a cost of $100 million.

The name of that epic structure is Overburden Conveyor Bridge F60 in Lichterfeld. This technological steel giant is 502 metres long, 202 metres wide, 80 metres high and 11,000 ton heavy. It was build in East Germany in 1991 by VEB TAKRAF Lauchhammer (although the GDR was manufacturing slightly lesser types since 1958). After only 13 months of operation the F60 bridge was taken out of operation for energy-political reasons. The opencast mine Klettwitz-Nord where the conveyor bridge was operating is closed. The bridge is owned now by the community and presented as the "Lying Eiffel Tower."