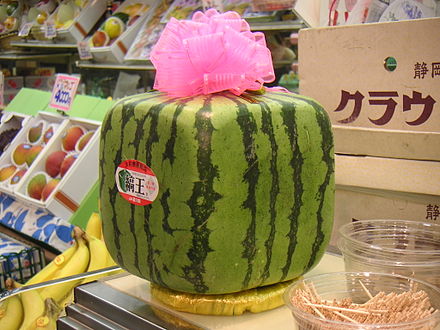 For years consumers have struggled to fit the large round fruit in their refrigerators. And then there was the problem of trying to cut the fruit when it kept rolling around. But 20 years ago a forward-thinking farmer on Japan's south-western island of Shikoku solved the problem. The farmer, from Zentsuji, in Kagawa prefecture, came up with the idea of making a cube-shaped watermelon which could easily be packed and stored. To make it happen, farmers grew the melons in glass boxes and the fruit then naturally assumed the same shape. Today the cuboid watermelons are hand-picked and shipped all over Japan. But the fruit, on sale in a selection of department stores and upmarket supermarkets, appeals mainly to the wealthy and fashion-conscious of Tokyo and Osaka, Japan's two major cities. Each melon sells for 10,000 yen, equivalent to about $83. It is almost double, or even triple than of a normal watermelon. 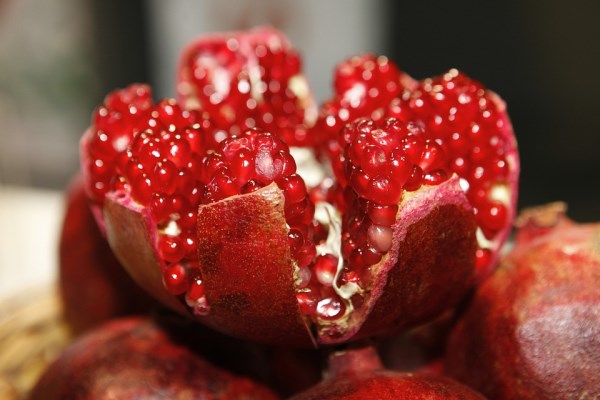 The pomegranate is native from Iran to the Himalayas in northern India and was cultivated and naturalized over the whole Mediterranean region since ancient times. The LA Times recently labelled pomegranate as ‘one of the most trendiest and versatile fruit on the market', and it could be good for you (another fruit sold for its ‘medical values'). Packed with antioxidants, pomegranate juice is now on the red carpet, and even the stars at the Oscars drink the dark red liquid. 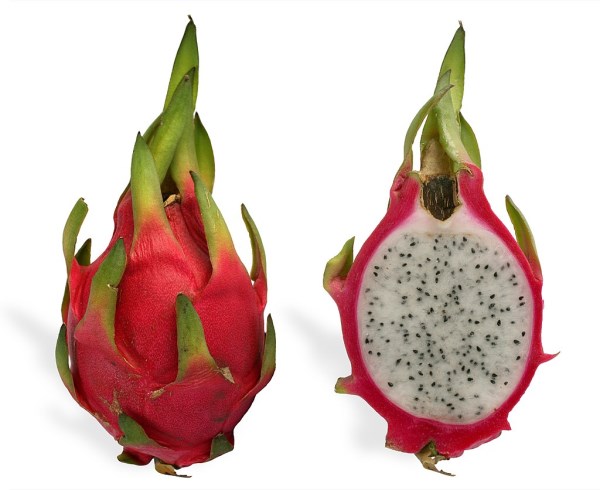 A pitaya is the fruit of several cactus species, most importantly of the genus Hylocereus (sweet pitayas). These fruit are commonly known as dragon fruit. The fruit can weigh from 150 to 600 grams. To prepare a pitaya for consumption, the fruit is cut open to expose the flesh. The fruit's texture is sometimes likened to that of the kiwifruit due to the presence of black crunchy seeds. The flesh, which is eaten raw, is mildly sweet and low in calories; dragon fruit should not be used to accompany strong-tasting food – except to "clean the palate" between dishes. The seeds are eaten together with the flesh, but they are indigestible unless chewed. The fruit is also converted into juice or wine, or used to flavour other beverages. The flowers can be eaten or steeped as tea. 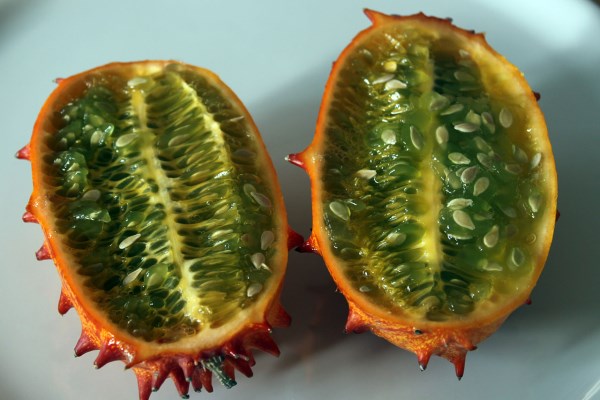 The horned melon (Cucumis metuliferus), also called African horned cucumber or kiwano, is an annual vine in the cucumber and melon family. Often known by its nickname in the southeastern United States - blowfish fruit - it is grown for its fruit, which looks like an oval melon with horn-like spines. The fruit of this plant is edible, but it is used as often for decoration as for food. When ripe, it has a yellow-orange skin and a lime green jelly-like flesh. The horned melon is native to Africa, and it is now grown in California, Chile, Australia and New Zealand as well. 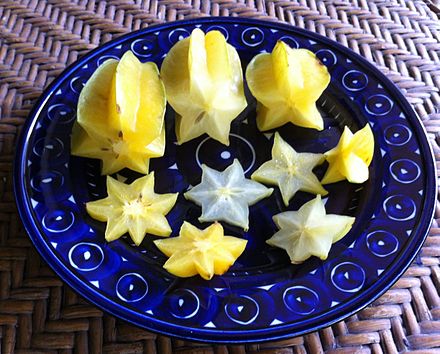 The star fruit or carambola is a tropical fruit that is gaining popularity in the United States. This fruit acquired its name from the five pointed star shape when cut across the middle of the fruit. It has a waxy, golden yellow to green color skin with a complicated flavor combination that includes plums, pineapples, and lemons. 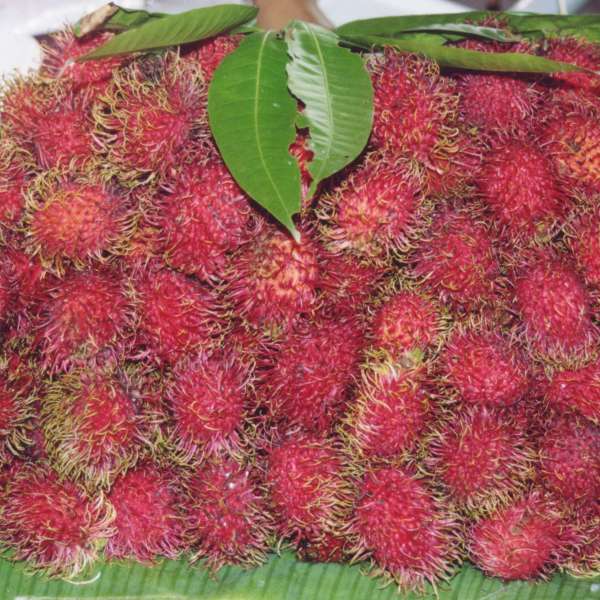 This is the strangest looking fruit ever. Rambutan in Malay, Indonesian, and Filipino literally means hairy, caused by the 'hair' that covers this fruit. On the outside it's magenta with green hairy legs all over it. From the outside you'd have no idea what to expect on the inside. Inside it's similar to a lychee fruit. It looks sort of clear and gummy. It's very watery and has a huge seed in the center. It tastes pretty decent, but it's the look of the ramputan that puts it in the top ten. 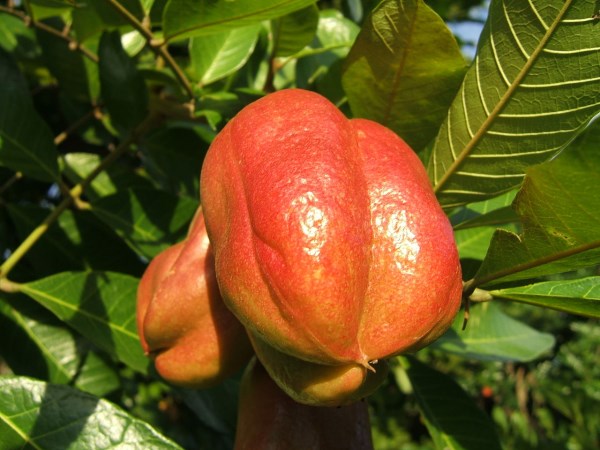 Ackee is Jamaica's national fruit. The fruit was imported to Jamaica from West Africa (probably on a slave ship) before 1778. Since then it has become a major feature of various Caribbean cuisines, and is also cultivated in tropical and subtropical areas elsewhere around the world. The fruit of the ackee is not edible in its entirety. Only the inner, fleshy yellow arils are consumed. It is extremely poisonous in the very center if you eat the red bits. 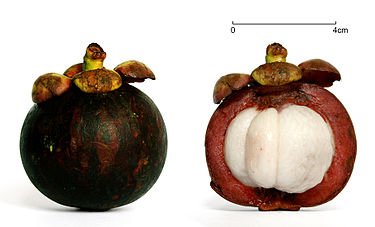 Called ‘mangkut', these are the ‘queen of Thai fruits' with their elegant, segmented white–flesh inside a thick large purple peel. They grow in the South and the season lasts just a few months of the year, mainly from May to September. If you are here in Thailand at that time be sure to enjoy this delicious and luxurious sweet fruit. 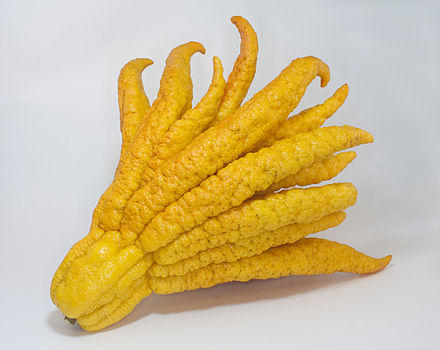 Ever heard of a Fingered Citron? How about a Buddha's Hand? It's a weird -looking citrus that has green or rich yellow tapering fingers or segments attached to a base – the appearance is not unlike a curled, arthritic hand, only there are usually many more than 5 fingers! But what on earth do you do with a Buddha's Hand? Do you eat it? Well, yes, and no. Its thick, lemony rind and pith (the white part) is often candied into a delicious citrus delicacy, infused with spirits or made into liqueurs. However, the small amount of inside flesh is quite sour and rarely used in food. The Buddha's Hand and other members of the Citron family are also prized for their aromatic citrus oils and used in perfumes and sometimes kept in homes as a natural air deodorizer. 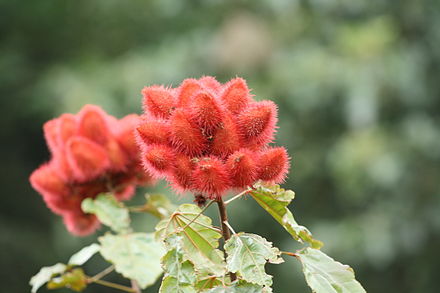 You can count on finding the Urucu plant (Bixa orellana) around every rural household in the Amazon. Achiote (Bixa orellana) is a shrub or small tree from the tropical region of the Americas. It is cultivated there and in Southeast Asia, where it was introduced by the Spanish in the 17th century. It is best known as the source of the natural pigment annatto, produced from the fruit.