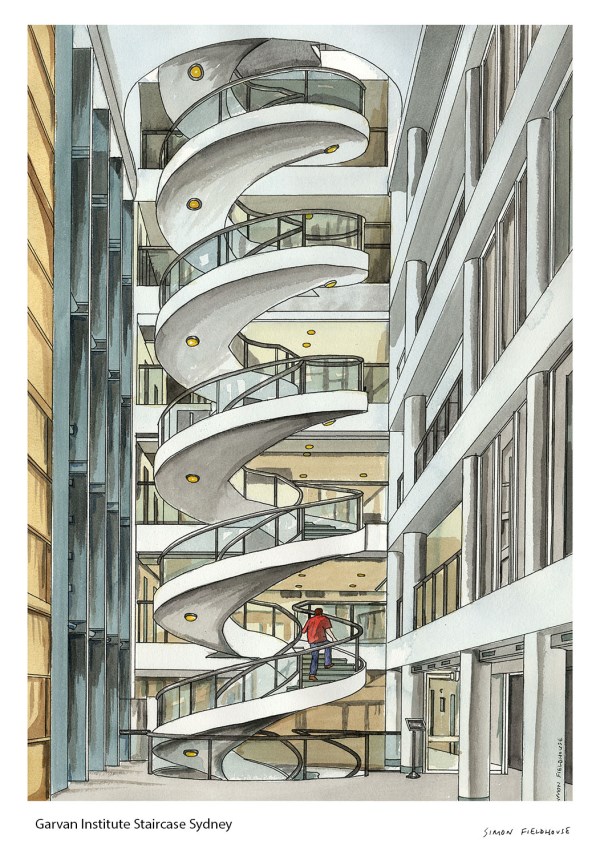 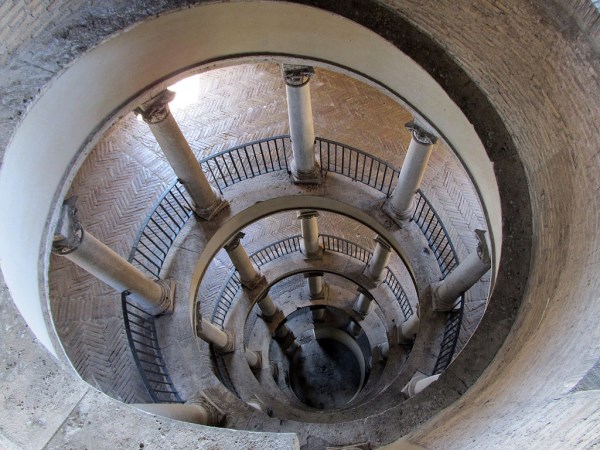 The Vatican Museums spiral staircase is one of the most photographed in the world, and certainly one of the most beautiful. Designed by Giuseppe Momo in 1932, the broad steps are somewhere between a ramp and a staircase. The stairs are actually two separate helixes, one leading up and the other leading down, that twist together in a double helix formation. Little did the Vatican Museum know in 1932 that this formation would come to represent life itself, with the discovery of the double helical DNA strand. 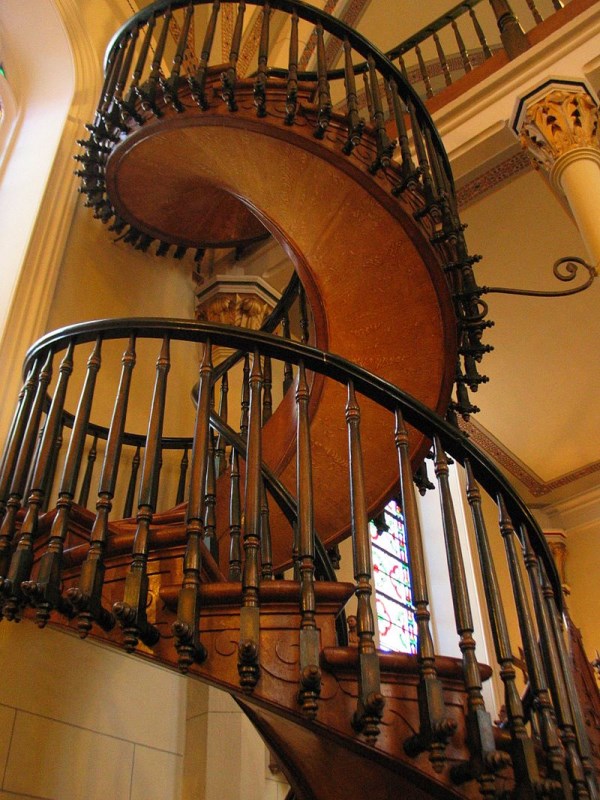 The Loretto Chapel is a chapel in Santa Fe, New Mexico, known for its unusual spiral staircase that is an exceptional work of carpentry. The construction and builder of the staircase are considered a miracle by the Sisters of Loretto and many who visit it, because it had no central support (a support was added later). The resulting staircase is an impressive work of carpentry. It ascends twenty feet, making two complete revolutions up to the choir loft without the use of nails or apparent center support. It has been surmised that the central spiral of the staircase is narrow enough to serve as a central beam. Nonetheless there was no attachment unto any wall or pole in the original stairway. Instead of metal nails, the staircase was constructed using dowels or wooden pegs. The wood for the staircase cannot be found anywhere in the region. The stairs had 33 steps, the age of Jesus when he died. The mystery had never been satisfactorily solved as to who the carpenter was or where he got his lumber, since there were no reports of anyone seeing lumber delivered or even seeing the man come and go while the construction was being done. Since he left before the Mother Superior could pay him, the Sisters of Loretto offered a reward for the identity of the man, but it was never claimed.

Note: some historians claime that most of this story is a myth. (Thanks, drxwes) 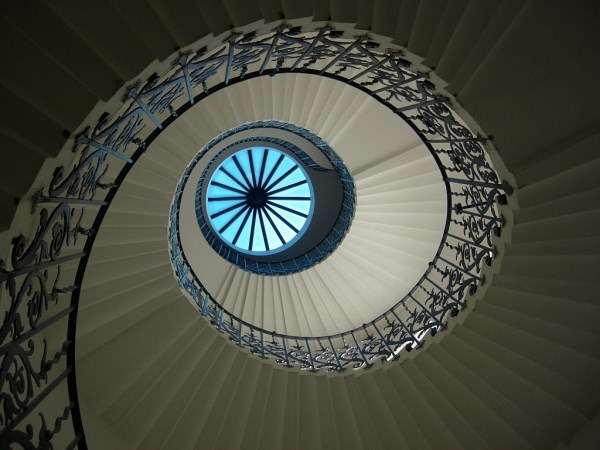 The elegant Tulip Stairs in the Queen's House are the first geometric self-supporting spiral stairs in Britain. Although called the 'Tulip Stairs,' it is thought that the stylized flowers in the wrought-iron balustrade are actually fleurs-de-lis, as this was the emblem of the Bourbon family of which Queen Henrietta Maria (wife of Charles I) was a member. The Tulip Stairs are also the location of the Rev R. W. Hardy's famous 'ghost' photograph taken on 19 June 1966, which when developed revealed what appear to be two or three shrouded figures on the staircase. 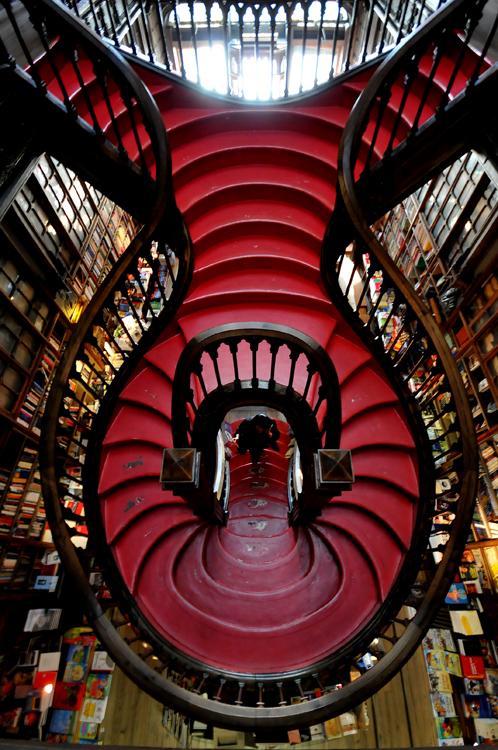 This interesting grand staircase in Lello Bookshop in Portugal stands ominous and heavy. The steps are like two channels pouring and swirling to a single point. The side view gives you a closer idea of the immense curves and giddy sinking feeling to each step. 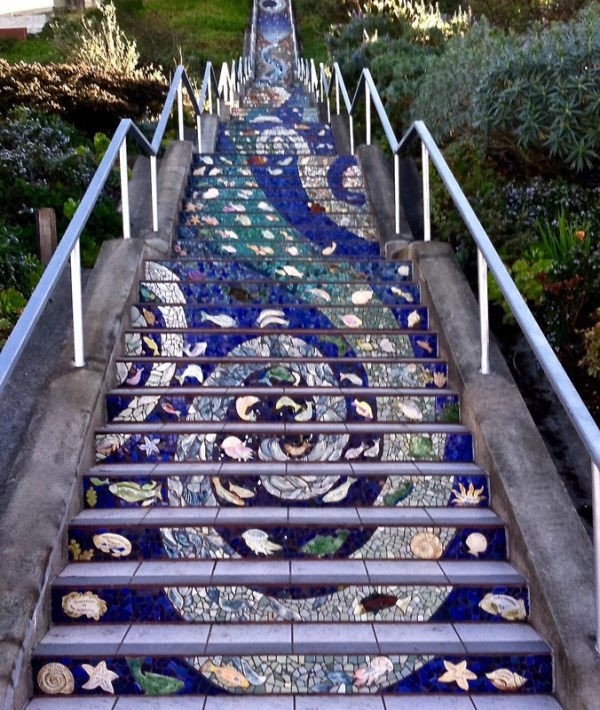 The 16th Avenue Tiled Steps, perhaps the world's longest mosaic staircase (163 steps, 82' high), was conceived and fabricated by Irish ceramicist Aileen Barr and San Francisco mosaic artist Colette Crutcher. Over a two and a half year period, a tireless group of neighbors raised funds and lobbied city government to make the project, unveiled in August 2005, a reality. Over 2000 handmade tiles and 75,000 fragments of tile, mirror and stained glass went into the finished piece, located at 16th Ave. and Moraga, in San Francisco. 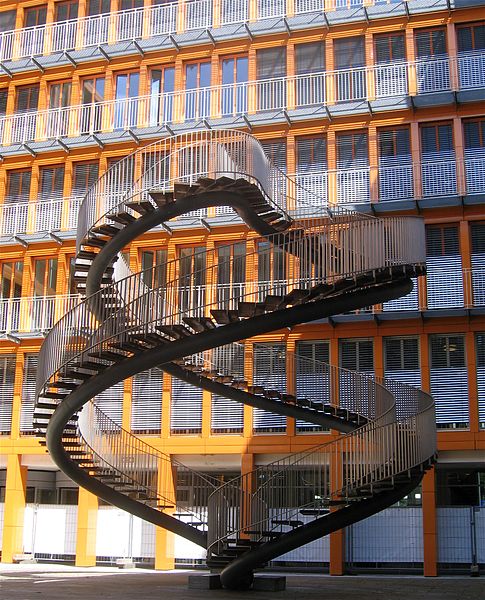 This artistic staircase designed by Olafur Eliasson is called Umschreibung (Rewriting), and was completed in 2004. It's in the courtyard of the global accounting firm KPMG in Munich. 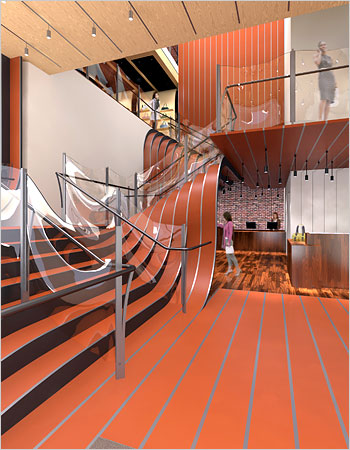 Constructed in 1¼” hot-rolled steel and taking six months to be built, the stair landscape weighs 55 tons and is an installation of ribbon-like forms that divide and converge to form a topography of walkways, landings and steps. 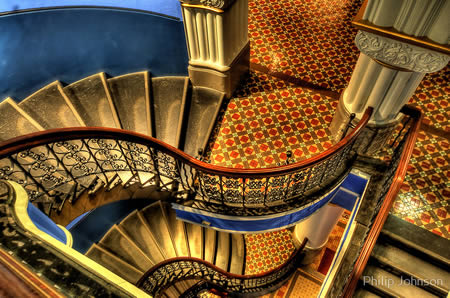 This image shows “The Grand Staircase" of Sydney's Grand Queen Victoria Building. This building, now affectionately known as the QVB, was designed by George McRae and completed in 1898, replacing the original Sydney markets on the site. Built as a monument to the long reigning monarch, construction took place in dire times, as Sydney was in a severe recession. The elaborate Romanesque architecture was specially planned for the grand building so the Government could employ many out-of-work craftsmen – stonemasons, plasterers, and stained window artists – in a worthwhile project. 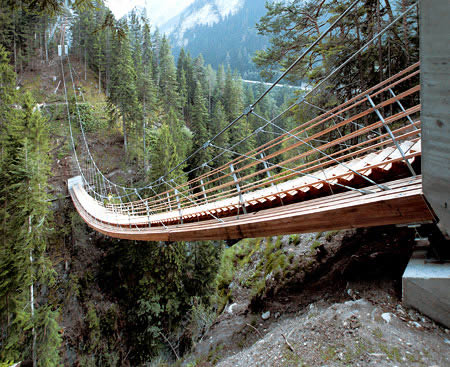 The bridge over the Traversinertobel, a side valley of the Via Mala, is the latest structure of this kind designed by engineer Jürg Conzett and his associate Rolf Bachofner . They solved the problem of connecting two different elevations over the gorge by creating a staircase. The staircase replaces a rope bridge for hikers that was wiped out by a rock slide. This suspended footbridge spans a distance of 56 metres, with a difference in height of 22 metres between the two ends.