A list of stupid tattoos really hard to explain on a first date or to the grandkids. 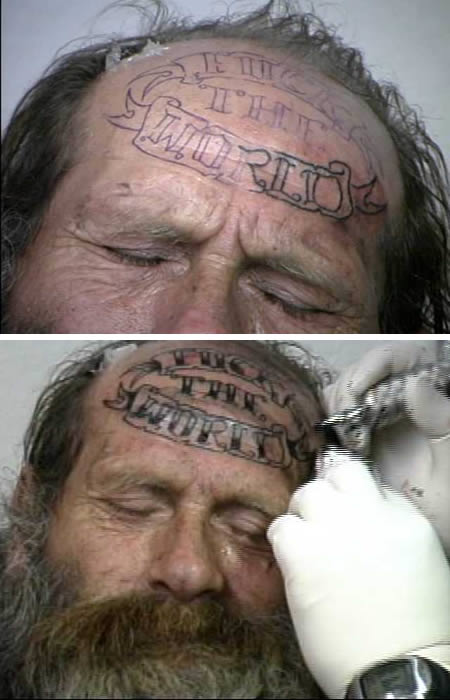 Is he really mad at the world or at his tattoo artist who accepted to do this job? 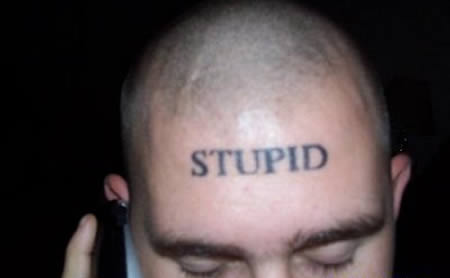 Any doubts about his stupidity? 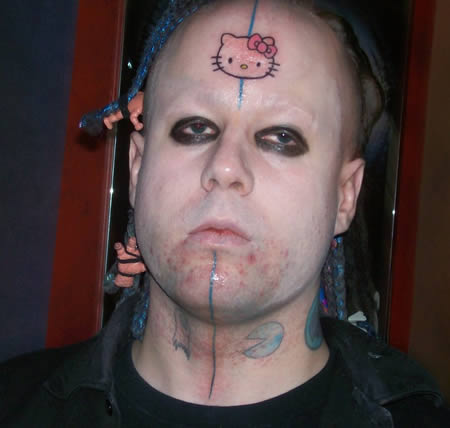 Even when you're ballsy/stupid enough to tattoo Hello Kitty on your forehead, it is not badass. 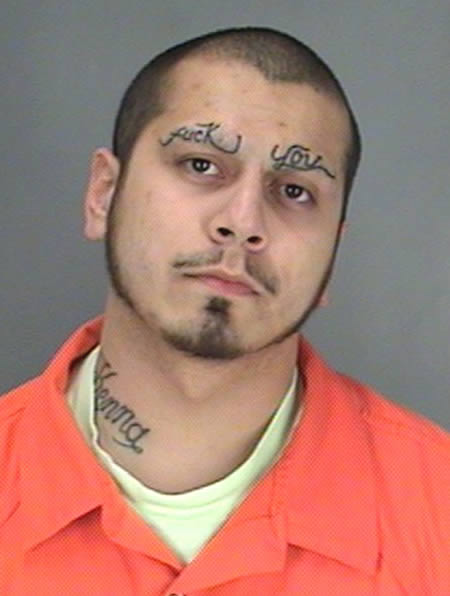 Does the cursive make this f* word tattoo more elegant? 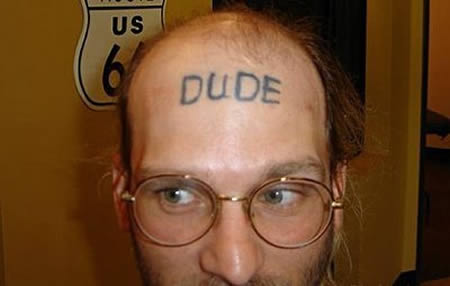 Why would he tattoo “dude” on his forehead? 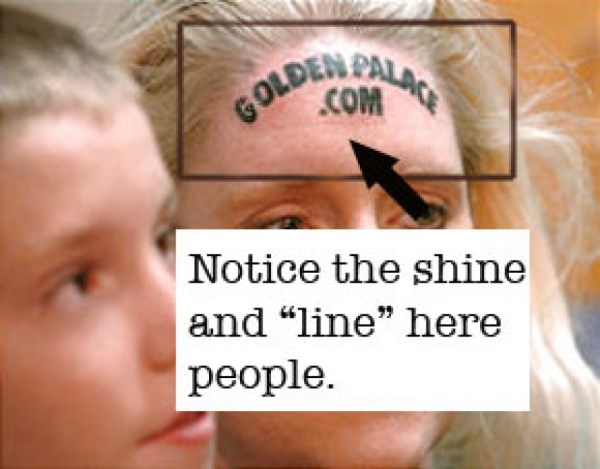 This woman was paid $10,000 to get this tattoo on her head. She said she did it so she could put her kids through school. 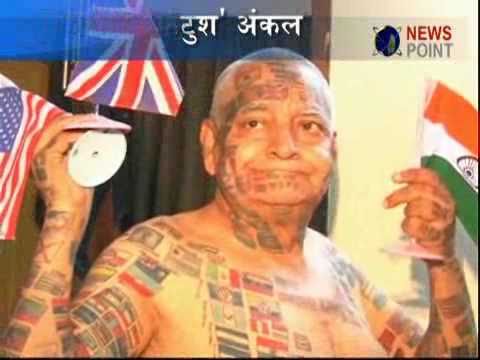 A man who is so keen on breaking records that he changed his name to Guinness is hoping to gain entry into the record book by tattooing the flag of every country in the world on his body. Guinness Rishi, 67, of India, already holds four world records. Rishi already has six of the tattoos done, on his face – the flags of India, the United Kingdom, the USA, Canada, Cyprus, and Hungary. He says that his face is being reserved for the most important flags – he thinks he can fit around 60 1-inch flags on his forehead. 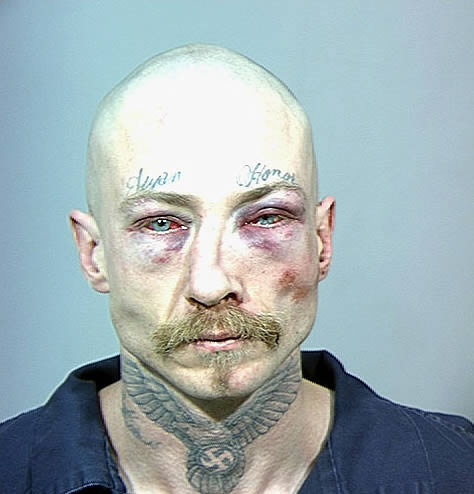 “Aryan Honor"... I believe the Nazi eagle neck tatt is optional but the two black eyes are compulsory (the tattoo artist gives them to you for being such a twat). 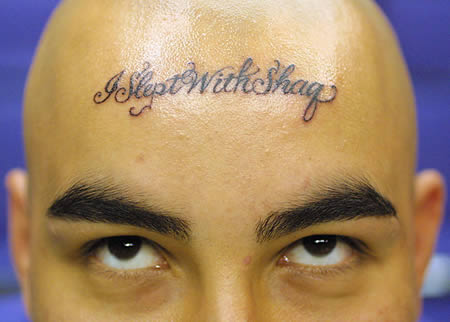 You may think this tattoo isn't real but it is. A radio station gave this guy Laker playoff tickets to do it. The same guy, on the same radio station, had also been tasered by Game, had mace squirted into his eye, and eaten worms. Shaq should probably sue this guy. 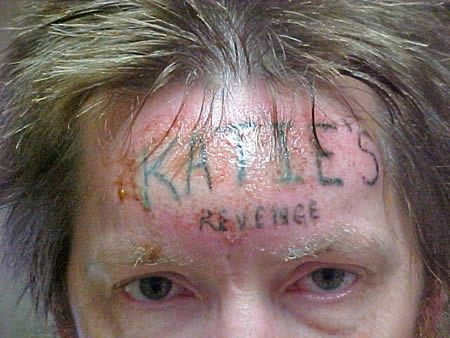 Katie's Revenge is the scraggly moniker etched across the forehead of child killer Tony Stockelman. It was put there by the cousin of Katie Collman, a fourth grader, murdered back in January 2005. 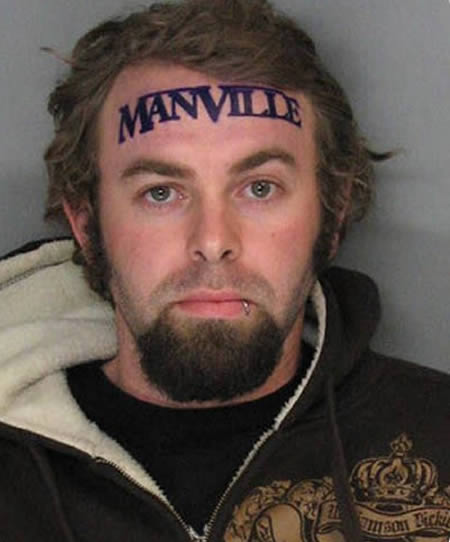 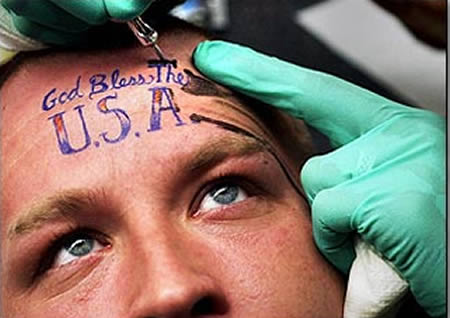 Jack Hansen, 27, has "God Bless the USA" tattooed on his forehead at a tattoo shop in St. Petersburg, Fla., on Sept. 21, 2001. The shop says its patrons are looking for patriotic themes in the wake of the Sept. 11 terror attacks on America. 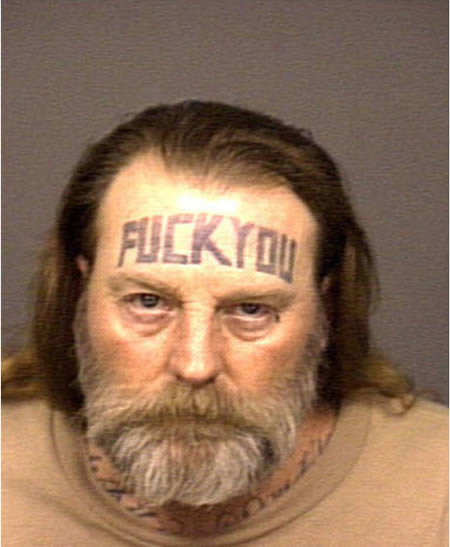 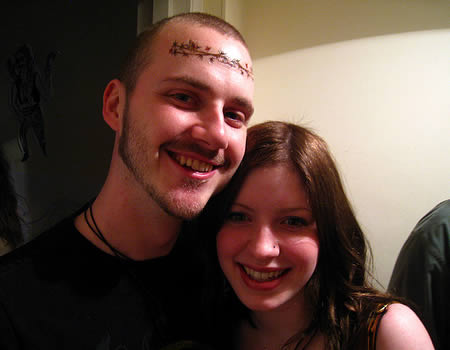 Take a good look. It's not very usual to find a guy with a tattoo on his forehead that can manage to find a girlfriend. 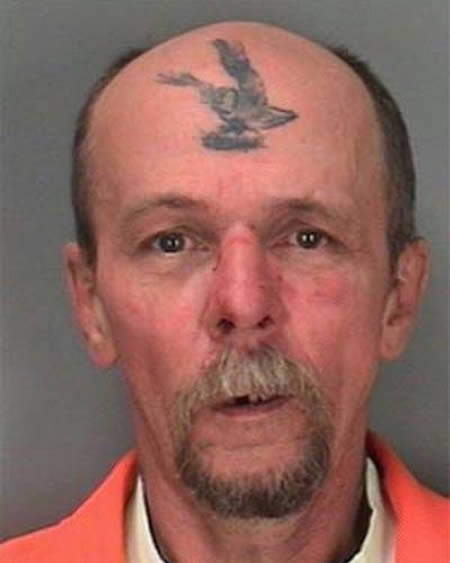 What the hell is this? An eagle? Bird poop?