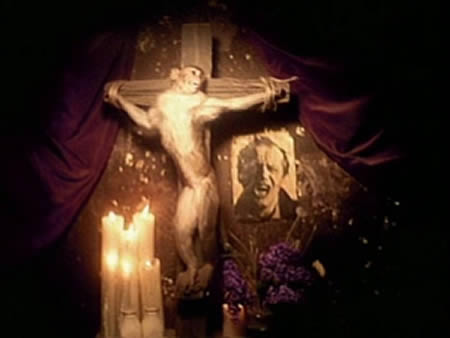 In spite of the blunt and profane sexual content contained in the song's lyrics (the chorus infamously begins with the couplet "I wanna fuck you like an animal/ I wanna feel you from the inside"), "Closer" became Nine Inch Nails' biggest hit of that time. The music video was directed by Mark Romanek and first aired on May 12, 1994, having been filmed in April of that year. It was cut down from its original length to 4:36. The video was popular and helped bolster the success of the band. The video shows events that deal with religion, sexuality, animal cruelty, politics, and terror in what appears to be a 19th century-style mad-scientist's laboratory. It was somewhat controversial due to its imagery, which included a nude woman with a crucifix mask, a monkey tied to a cross, a pig's head spinning on some type of machine, a diagram of a vulva, and Reznor wearing an S&M mask while swinging in shackles. Despite (or perhaps because of) its controversial content, Romanek's video is considered a work of art: the Museum of Modern Art has added it to their permanent collection. 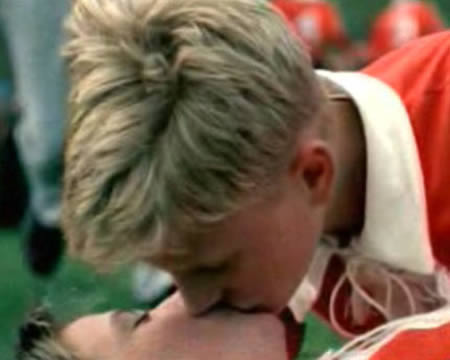 The song is called Viorar Vel Til Loftarasa by Sigur Ros, a band from Iceland. What is so controversial about this video? Set in 1950s Iceland, it features a kiss between two young boys which is broken up by the father of one of the boys during a football match. All band members do a cameo in the music video: Jónsi is the soccer team coach, Orri is the scorekeeper, Georg is the referee, and Kjartan is one of the spectators. Actually (not officially confirmed) some people say that the dark haired boy is actually a girl, otherwise the video couldn't have been done, because no parent would have accepted something like their son kissing another boy. So they searched for a girl that looked like a boy, nice trick. 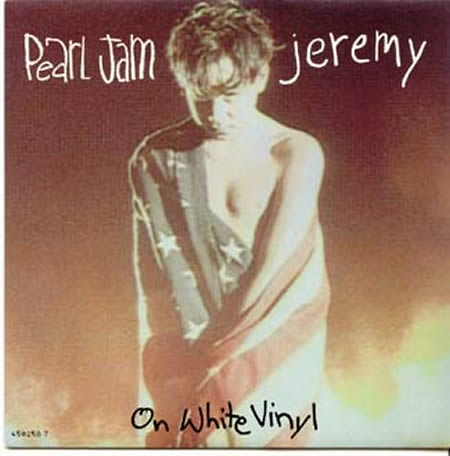 This video depicts a boy who is mercilessly teased by his classmates and ignored by his parents. At the end of the video he strolls into class with a gun and we see him raise his arm. The next shot is of the students in class sitting completely still and spattered in blood. The song takes its main inspiration from a newspaper article about a 15-year-old boy named Jeremy Wade Delle, born February 10, 1975, from Richardson, Texas who shot himself in front of his English class at Richardson High School on the morning of January 8, 1991 at about 9:45 am. In a 2009 interview, Vedder said that he felt "the need to take that small article and make something of it—to give that action, to give it reaction, to give it more importance." The controversy, of course, came after Columbine. MTV and VH1 both banned the video, and even now it's very rarely seen. You can watch the video here. 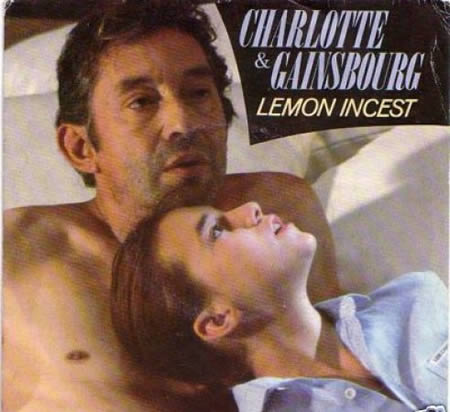 This French video from Serge Gainsbourg's “Lemon Incest” was pretty controversial. Gainsbourg was reknowned for his provocative side, but even by his standards, this song he wrote for himself and his daughter was beyond the pale. Between the title and the fact that the video showed him in bed with his 12 year-old daughter, Charlotte, this video has surely earned its place at this Oddee's list. 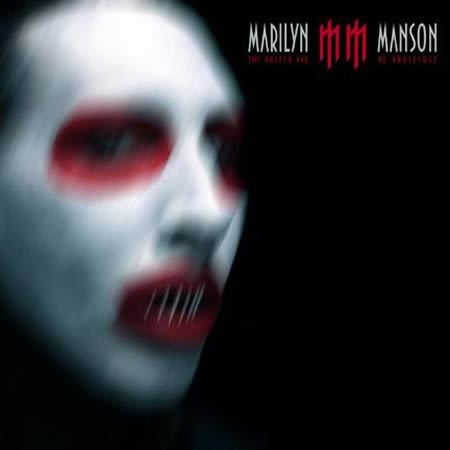 Any number of clips by the "Antichrist Superstar" could be included on this list, but the video for (s)AINT trumps them all. Manson's own label was repulsed by this gratuitous mess of self-mutilation, cocaine snorting, blood-smearing and bondage. After the original "(s)AINT" music video was banned in the United States, Manson made another version appropriate for television and other sources. Along with the release of the album, "Lest We Forget," Manson released a single DVD with the uncut, banned from the label, original version of the music video. The only way to receive this, though, was to order it through Manson's website. It came also with the CD/DVD package. The explicit version of the DVD was released with the (s)AINT video in Australia and Europe. Japan required an edited version of the video due to censorship laws on showing female genitalia in media. The video was launched in 2003 but people are still having nightmares about it.

The song "It's a Beautiful Day for Cancer" by rapper Al Bino has sparked huge debate about whether the musical filmclip is a legitimate song from an up-and-coming artist or a cunning viral marketing campaign. The clip features a nasty looking head growing from a mole on a shirtless man's back which sings backing vocals for Al Bino about the stupidity of sun-bathing. 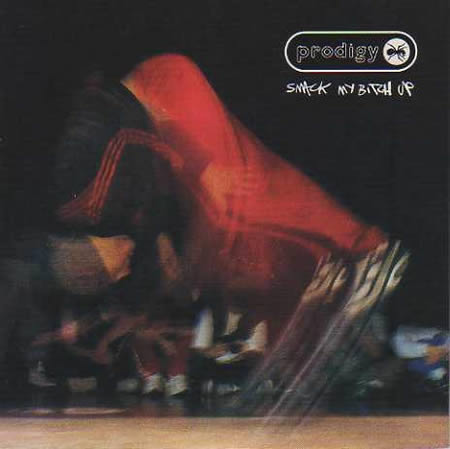 "Smack My Bitch Up" was the thirteenth single released by the British Big Beat band The Prodigy in 1997. The song was highly controversial because its lyrics, title and music video were believed to promote violence against women. The lyrics "Change my pitch up / Smack my bitch up" are repeated through the whole song. The song was banned by the BBC. The video, directed by Swede Jonas Åkerlund, was as controversial and popular as the song itself. The film depicts a night out in the city filmed from a first-person perspective, portraying drinking and driving, snorting cocaine, violence, vandalism, nudity and sex. The unedited version also includes a scene of heroin use and a hit and run incident. The protagonist takes a stripper (played by model Teresa May) home and has sex with her. As the stripper leaves with her stuff, the protagonist glances in the mirror, is revealed to be a woman, and passes out on the bed.

Though universally banned from television, massive demands on MTV eventually had them relent and show the video, but only after midnight and following an MTV News warning. In mid-2002, the full unedited version of this video was aired on MTV2 as part of a special countdown showing the most controversial videos ever to air on MTV. This countdown was only shown late at night because of the graphic imagery of "Smack My Bitch Up" and several other videos on the countdown. This video was at #1 on the countdown and therefore named the "Most Controversial Video" in MTV's history. Despite the controversy, the video would be nominated for four MTV Video Music Awards, and eventually won Best Dance Video and Breakthrough Video. 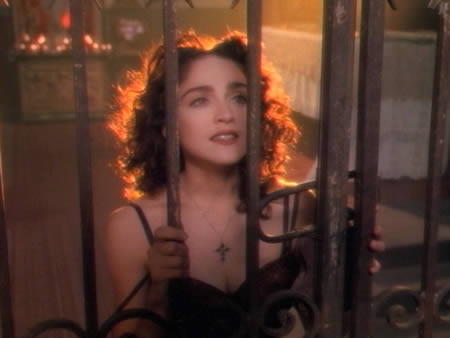 Though you can understand why the Pope might be pissed off by Madonna's appropriation of Catholic iconography in this video, Like a Prayer seems almost quaint by today's standards. But back in 1989 it was criticized for several things: the burning crosses imagery, the scene where Madonna has stigmata and the part where she gets it on with a saint. People not familiar with Martin de Porres, the saint in question, thought the video depicted Jesus, so that caused a big kerfuffle as well. After the scandal, Pepsi cancelled a commercial starring the big star. 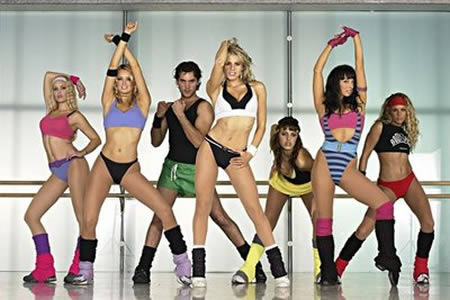 "Call on Me" is a 2004 song performed by Swedish DJ and producer Eric Prydz. The music video is directed by Huse Monfaradi and features an aerobics class of women wearing 1980s styled aerobics outfits performing sexy gym routines led by Deanne Berry, much to the enjoyment of the sole man in the group, played by Juan Pablo Di Pace. While being interviewed by Chris Evans for UK Radio Aid, ex-UK Prime Minister Tony Blair said: "The first time it came on, I nearly fell off my rowing machine." Many politicians and family groups have pushed for the video to be banned, but there are actually two videos - an edited one shown in daylight hours and a late night version which is uncut. The song reached number 1 Singles Chart in the UK, Germany and Republic of Ireland. In Australia, "Call on Me" debuted and peaked at #2. The video was the highest-downloaded music video of all time in Australia.

Due to the popularity and high demand for the video, a feature length aerobics DVD was later released, titled Pump It Up - The Ultimate Dance Workout, which featured the dancers from the "Call on Me" video performing aerobics routines to various popular dance music songs. 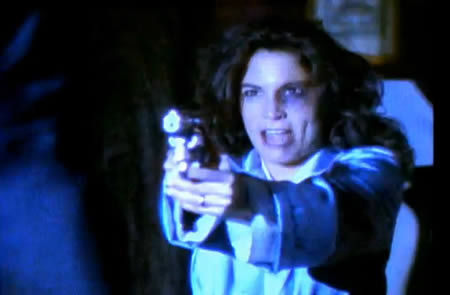 Yep, even country music artists can cause a stir. Brooks' “The Thunder Rolls” is about a cheating and abusive husband (although the video makes the abuse more evident than the song does) who gets his comeuppance when his wife kills him. The latter part was told in the third verse of the song, but it has been dropped except for live performances. The video, however, still shows this ending to the tale. That, coupled with the theme of abuse, got this video banned from CMT and TNN, but it won the CMA Music Video of the Year.