Without the Christian church of the Middle Ages, Sigmund Freud of the 19th century would have been out of work. Many of the deepest ideas and notions of sex that we hold today were formulated and laid down in the Middle Ages, especially by the Church’s sometimes confused and other times severe pronouncements.

The Church had opinions and laws about every aspect of sex. Adultery and fornication in some cases were sins punishable by death, but for a time the Church actually condoned prostitution, admitting that it was a necessary evil. And in the early part of the Middle Ages, priests were actually allowed to marry and have children.

But despite the Church’s overall opposition to sex, it appeared to be very interested in the subject. Descriptions of sex acts were often described in great detail that sounded as if they were written with some enjoyment. One wonders whether if these early theologians were just a little titillated by the subject as they wrote their long polemics on sexuality. 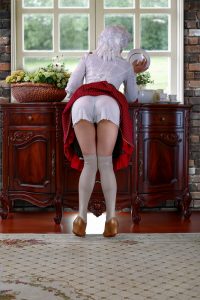 1. Courtly Love: You can look, but you’d better not touch

Courtly love is associated with the Knight who falls in love with the married woman – or at least the idea of the pure woman. He admires her from afar, goes to war for her, and sacrifices his life, or reconnect again especially when they are really bored.

Troubadours, medieval singers who went from town to town, singing love songs, often represented this idea of courtly love, with an undercurrent of sexuality. An example is a Spanish song about a young woman visiting a nearby stream:

Her adoring boyfriend meets her there:
a mountain stag makes the waters stir.
Happily in love, in love she’s happy.
(from Song About a Girl at a Spring)

2. Adultery: Keep your pants on, mister!

For anyone serious about Christian morality, sex was not an option. Celibacy was the ideal way to conduct one’s life and sex was condoned only as part of a marriage. Pre-marital or extra-marital sex was a serious risk, if you had to “scratch an itch.” Priests were required to report adulterers and fornicators (those having sex outside of marriage) and punishments could range from years of doing penance to death. But it wasn’t just the Church that disapproved of adultery and fornication, it was also noblemen, who wanted to be certain that any children of their marriage were, in fact, their own. One real life story of courtly love gone wrong involved King Phillip of France (also known as “Phillip the Fair”). He discovered that his three daughters were having intimate relations with some of his knights and had the men publicly disemboweled. His daughters were then sent to monasteries and one of them was possibly murdered.

In reality, there was a more lenient attitude, especially in rural populations where sexual dalliances were routine. Often the priests would try to force the “sinners” to marry, and all would be forgiven. If marriage was out of the question, punishments could involve years of penance.

3. Sexual Positions: Insert tab A into slot B

These were the official ideas of the Church, but some “progressive” theologians began to question these ideas. Albertus Magnus named five sexual positions and ranked them from most acceptable to least acceptable: 1) missionary, 2) side-by-side, 3) sitting, 4) standing and 5) a tergo. Magnus said the missionary was the only completely “natural” position; the others were “morally questionable but not mortally sinful. In certain situations, however, (such as extreme obesity), these other positions could be not only acceptable but even practical.

The church began to prosecute sexual sinners in the 12th and 13th centuries. Sodomy was punishable by death, which could involve mutilation, burning at the stake, hanging, and, in the case of priests caught in the act, being hung in a suspended cage until they starved to death.

There is, however, evidence of highly placed figures that were homosexuals. King Richard I (the Lionheart) of England was thought to be homosexual; it is rumored that he met his wife Berenegaria while in a sexual relationship with her brother, the future King Sancho VII of Navarre. It is also reported that he and King Philip II of France were sexually involved. An historian of the time said they “ate from the same dish and at night slept in one bed” and had a “passionate love between them”.

5. The Fashion of Virility: Is that a codpiece, or are you just happy to see me?

One of the most popular fashion accessories of the Middle Ages was the codpiece – a flap or pouch that attached to the front of the crotch of men’s trousers and accentuated it in such a way as to emphasize or exaggerate the genitals. They were stuffed with sawdust or cloth and held closed by string ties, buttons, or other methods. The crotch was often extremely large or gave the idea of an erect penis. The word, codpiece, comes from the Middle English word, cod, which means scrotum.

Another symbol of virility in fashion was a style of shoe called the poulaine. These were long, pointy-toed shoes, that were also meant to suggest the size of the wearer’s penis – the longer point, the more virile the man.

Codpieces and poulaines are frequently seen in the paintings of the Dutch artist, Pieter Breugel. There is a portrait of Henry VIII, one of the great “fashion horses” of the later Middle Ages, wearing both.

Understandably, the Church did not appreciate these articles of clothing, calling them “fashions of the devil.”

“Have you done what certain women are accustomed to do, that is to make some sort of device or implement in the shape of the male member of a size to match your sinful desire? If you have done this, you shall do penance for five years on legitimate holy days.”

7. Virginity and Chastity: Jumping off the sex wagon!

The medieval Church’s belief that celibacy was the only way one could worship God was embodied in the Virgin Mary. In the Middle Ages, virginity would have been an ideal to aspire to, but it was rarely achieved by commoners and nobles alike.

But it was possible to become a “born-again” virgin. The Church made it possible for women who not only had had sex, but who had mothered children, to confess their “sins,” perform years of penance and spend their remaining years in a convent. Women who chose this path renounced their so-called role in the “original sin” (of tempting Adam with the Fruit of Knowledge) and joined what was known as the Cult of the Virgin.

Chastity has almost the same meaning as virginity. Many believe the “chastity belt,” a belt worn by women over their vaginas to prevent penetration, was a medieval phenomenon. In fact, it was an invention of the 19th century.

8. Prostitution: Looking for a good time?

Prostitution thrived in the Middle Ages, whether it was approved by the Church or not. In larger towns, prostitutes could practice their trade in anonymity and it was regarded as an honest and essential profession.

For a time, the Church actually approved of prostitution. Ironically, the practice was regarded as a way of preventing adultery and homosexuality on a larger scale, so it was viewed a necessary evil. St. Thomas Aquinas, one of the sterner theologians, wrote: “If prostitution were to be suppressed, careless lusts would overthrow society.”

The most respectable prostitutes worked in brothels, or “stews.” Most villages had one. In some villages, prostitutes had to identify themselves by particular pieces of clothing, such as a veil with a yellow stripe. Women who practiced outside of a brothel were often exposed to the harsher elements of society. Some were imprisoned, tortured or mutilated.

9. Contraception: If the dam breaks …

Throughout the Middle Ages, the Church was more concerned with the sins of pleasure resulting from “unnatural” sexual acts than with the issue of contraception. Theologians disagreed with contraception then, as now, but the Church appeared to be less concerned about it than denouncing the many other sinful practices. Contraception was viewed as a minor moral problem, not a mortal sin.

Apart from the practice of coitus interruptus, there are some references to condom use by men. Condoms, then, consisted of animal bladders or intestines tied with twine and were reused many times. It appears they were used more as a way of preventing venereal diseases, such as syphilis. Later versions of the condom were made with linen. The first contraceptive use of the condom was not until the mid 1600s.

Women sometimes used pessaries, concoctions of a variety of ingredients that acted as a kind of spermicide. They were applied inside the vagina. One pessary recipe consisted of ground dates, acacia bark, and a touch of honey mixed into a moist paste. The wool or cloth was then soaked in this mixture and inserted inside the vagina.

10. Sexual Dysfunction: Wake up and make love with me!

If a man could not perform sex, the Church brought in a special group of “private investigators” – wise village women who would examine the husband’s penis and assess their general health to determine if they were capable of performing sex for procreation (and pleasure). If the penis was deformed, or if there was some other reason he could not consummate the marriage, the couple would be separated. Many medieval physicians in Europe were great followers of Islamic medicine. Muslim physicians and pharmacists were the first to prescribe medication for the treatment of erectile dysfunction, including drug therapy combined with diet. Most of these drugs were oral medication, though a few patients were also treated through topical and transurethral means.

David Morton is a Vancouver-based blogger and writer, who is working on a novel about monasteries in the Middle Ages. He is also a teacher of English as a second language. You can read his blog at http://blog.dmorton.ca