1The train that passes through a residential building 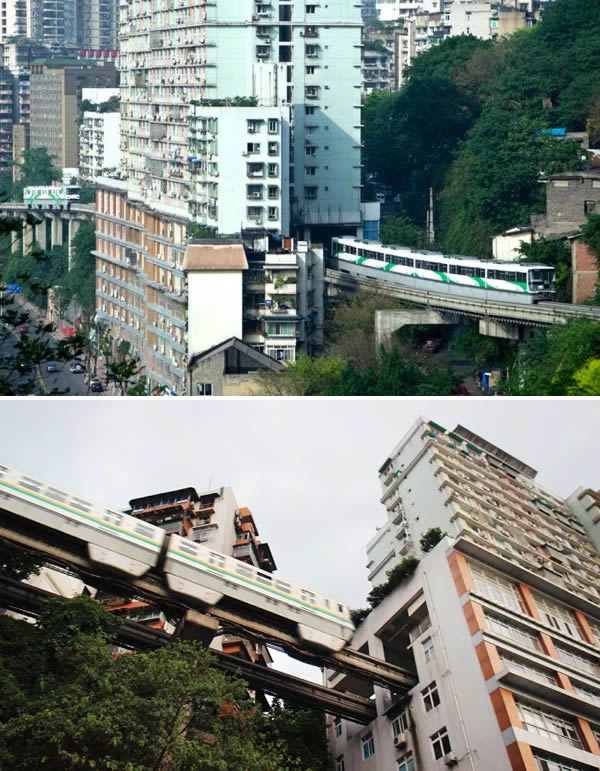 Due to the unique topography and high construction density of Chongqing, one of the most populated cities in China, architects and city planners had to come up with a unique way of developing a vital monorail line. Their solution—having the train pass straight through a 19-floor apartment building.

With the Daba, Wushan, Wuling, and Dalou Mountains to the north, east and south, most of Chongqing's terrain is made up of hill slopes. That, coupled with the lack of space due to the high building density and a population of around 49 million people, makes working on infrastructure a real challenge for architects and city planners. In 2004, when the Rail Transit No.2 was approved, they only had two choices; to either tear down the whole apartment building to make room for the monorail or clear two floors and make a tunnel so that the train can pass through it. As unconventional as it seems, experts went for the second option, and 13 years later they are still convinced it was the right thing to do.

2The narrow street that has a train passing through it 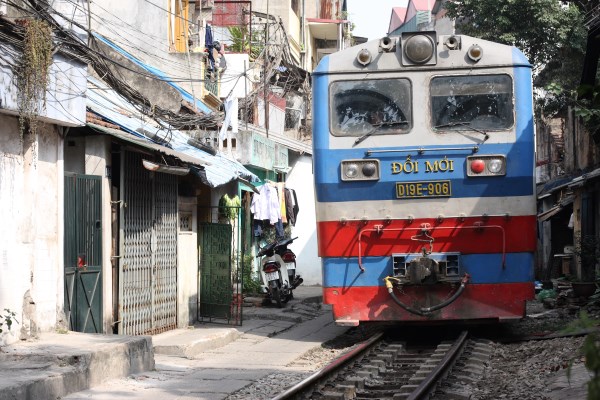 Most of the time, railroad tracks are expertly marked, warning passersby to keep a look out for oncoming trains, but what if the tracks were just steps from your front door?

This is the case for many in Hanoi. On a busy city street, people live and work alongside the railroad tracks found in the city's Old Quarter, and only move temporarily when the train passes. Shops are shut down, and immediately re-opened just as soon as it brushes past.

3The trains that pass through the world's longest rail tunnel 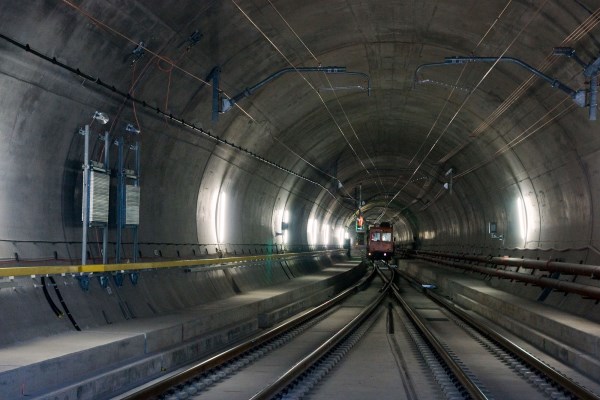 The world's longest and deepest rail tunnel was officially opened in Switzerland in 2016, after almost two decades of construction work. The 57km (35-mile) twin-bore Gotthard base tunnel provides a high-speed rail link under the Swiss Alps between northern and southern Europe.

Goods that until recently were carried on the route by a million vehicles a year are now able to go by train instead. The tunnel has overtaken Japan's 53.9km Seikan rail tunnel as the longest in the world and pushed the 50.5km Chunnel, linking the UK and France, into third place.

4The train that crosses an airport runway 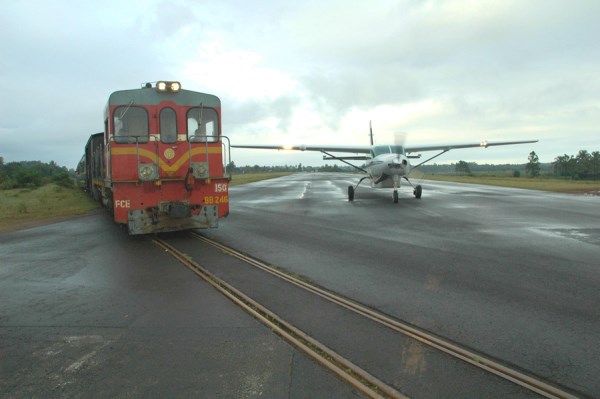 Gisborne Airport is a regional airport that is situated on the western outskirts of Gisborne, New Zealand. It is one of the very few airports in the world that has a railway line intersecting the runway. The airport covers 160 hectares with three grass runways and one main runway that are crossed by the Palmerston North-Gisborne Railway Line. The airport also has a single terminal with two tarmac gates.

Tasmania's Wynyard Airport also had a railway crossing on the runway, but moribund rail traffic forced its closure in early 2005. The Gisborne rail route functions between 6:30 in the morning and 8:30 at night.

One of the more appealing aspects of the railway line? When it passes directly on top of the runway, trains have to stop for clearance from the air traffic control to cross and continue down the line.

5The train that runs along the Brusio Viaduct 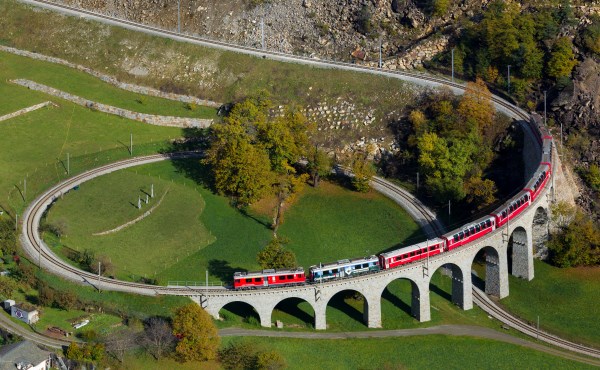 The Brusio is a single track, nine-arched, spiral railway viaduct located in Brusio, in the Canton of Graubünden, Switzerland. Like most spiral tracks, it was built to permit trains to get elevation in a relatively short distance. It is 110 meters long, has a horizontal curvature of 70 meters, a longitudinal slope of 7%, and its nine spans are 10 meters each in length. It forms part of the Bernina Railway section between Brusio and Campascio, and is about 55 km from St. Moritz.

6The trains that cross on top of a causeway 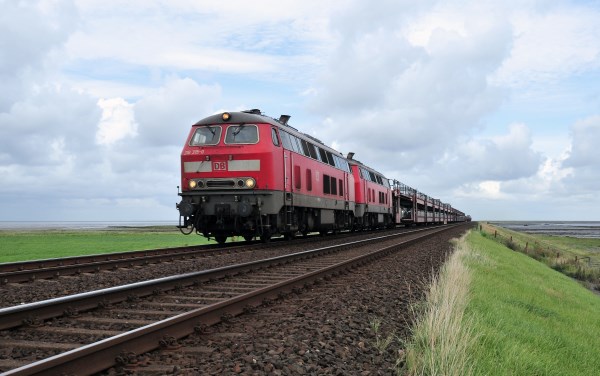 A dramatically photoshopped image showing a train travelling over the Hindenburgdamm on a rough sea appeared on postcards published in the 1970s.

The Hindenburgdamm is an 11 km-long causeway joining the North Frisian island of Sylt to mainland Schleswig-Holstein,
Germany. It was opened in 1927 exclusively for rail transport.

Before the causeway was built, the connection to the island was at the mercy of the tides, and in winter, the ice in the Wadden Sea formed an impenetrable barrier—the crossing took about six hours in adverse weather and flow conditions lasted longer. As the seaside resort of Westerland, became increasingly popular, officials started planning the rail causeway. Today, more than 100 trains pass over every day, with 50 of those ferrying cars (there is no road link to Sylt). Each year, the railway ferries more than 450,000 vehicles over the causeway. 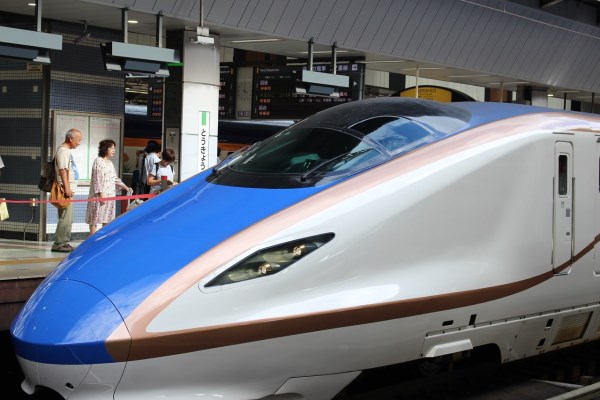 China plans to build an ambitious 13,000 km rail line to operate bullet trains to America through Russia by passing through a tunnel underneath the Pacific Ocean.

The proposed line beginning from China's could go through Siberia, the Bering Strait, Alaska, and Canada before reaching the contiguous U.S. Once the line is put to use, bullet trains can run at 350 km per hour, enabling passengers to travel from China to the US in less than two days. Russia, which is heavily dependent on rail transport like China, is also progressively advocating the idea.

Crossing the Bering Strait in between Russia and Alaska would require about 200 km of undersea tunnel.

8The trains that pass through Bloomer Cut 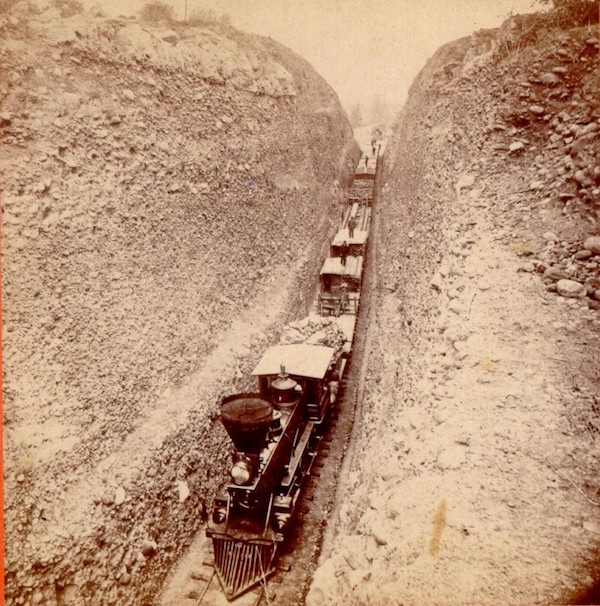 When they were first constructing the railroad through Auburn, California (in the 1860s), they had to make some deep cuts west of town and built a long (100 ft tall by 500 ft long) timber trestle bridge across Deep Gulch. When Bloomer Cut was completed in 1864, it was hailed as the “Eighth Wonder of the World” and has remained virtually unchanged. The cut is one of few Transcontinental Railroad landmarks that has survived the ravages of time.

In 1862, Indiana State Representative William Holman remarked that the Transcontinental Railroad “could never be constructed on terms applicable to ordinary roads…it is to be constructed through almost impassable mountains, deep ravines, canyons, gorges, and over arid and sandy plains.” Representative Holman identified most of the obstacles that faced the construction of the Transcontinental Railroad, and Bloomer Cut is a stunning, historic example of how those obstacles were overcome. The cut is an engineering marvel and a testament to the strength and determination of the laborers who built it.