It’s officially December 1st, which means we’re about two months into the season of Christmas carols. Or, at least, we would be if going to retail stores didn’t carry with it the risk of catching COVID. No one can argue that “I’ll Be Home for Christmas” hits a little differently this year.

Some Christmas carols are so interwoven with childhood memories that nostalgia unravels us when we hear them. Some are paragons of what Christmas means, like “All I Want for Christmas.” While others are sheer abominations against the holiday spirits, and those are the ones that appear on this list.

10 Worst Christmas Songs of All Time

Xtina kicked off the aughts with so much authority we all just accepted low-rise jeans like they were an inevitable part of the 21st century. She tackled this classic with the same confidence, but fool me once, ya know?

Whatever your feelings regarding the song’s rape-culture implications, you have to be offended by this effort to de-sexualize the innuendo by putting fancy-dress dancing kids in the music video. In short, I present the lyric, “but maybe just a soda pop more” as substantiating evidence.

My understanding of a cappella extends as far as Andy from The Office, but this genuinely isn’t enjoyable listening for people, is it? It’s also written from a kid’s perspective, and while it doesn’t involve a drunk dad or watching your mother cheat, the phrasing of it “feels good to be bad” is more nuanced than feeding veggies to the dog.

How’s he doing these days? Last I heard, he was quitting music to focus on being a Christian husband. Based on this waste of fake-snow music video, no great loss to the institution of music.

Any song that starts from the perspective of an eight-year-old is headed for troubled water. And woo, this is an un-invited look into John Denver’s psyche. During this, he’s warbling away as a kid, asking his Dad not to get drunk on Christmas and make his mom cry. It’s just too dark.

5. Santa Claus is Coming to Town

I understand that “The Boss” is a cultural phenomenon. What I don’t understand is why. This may be a fine rendition by a fine musician, but I couldn’t make it past the minute and a half of Springsteen handing out Santa hats to his bandmates before donning a mutant Santa/cowboy hat hybrid himself.

Is this what Christmas sounds like to some people? I’ll be the first to admit that Christmas songs are corny-as-hell, but that’s the point. You’re allowed to be corny and let it make you feel something. So, trying to shoehorn some sick guitar riffs into Christmas is a fundamental misunderstanding of what we’re all trying to do here.

Let me just say that a single Neil Diamond album got me through the worst breakup of my twenties. But this bizarre mashup of Cherry Cherry (beyond reproach) and melancholy holiday songs (pure nostalgia) is offensive to music, Christmas, and my love for Neil. 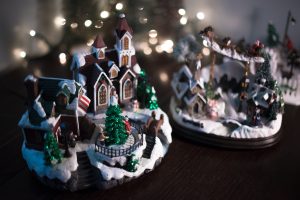 The problem with being a talented, successful musician is you have to put out a Christmas album at some point. So when you teary-eyed tell your team that your Christmas message is that people shouldn’t buy puppies, no one has the stones to tell you what a nightmare the song is.